There are myriad treasures to be recovered this evening. And if the cries of enthusiasm are any measure, the most valuable is a kohlrabi. A student pulls it from a garbage bin behind a Penny Markt discount supermarket in the city of Aachen. Kohlrabi, after all, is her favorite vegetable; no other find can compete with that bounty.

About a dozen young people, most of them students, are wandering through Aachen on this July night learning how to dumpster dive -- how to rescue food from supermarket garbage bins. For most of them, it's their first time. They say they aren't doing it for financial reasons, but because they find it a good idea due to their critical approach to consumerism.

They are being guided by experienced dumpster divers, who offer these kinds of tours every couple of weeks. One of the guides is Tobias Koschmieder, 32, who works in an assisted living facility. "I don't see why I should pay for food when I can have it for free because others have thrown it away," he says. Another is Christian Walter, 30, who also works in the "social sphere." The problem, he says, is capitalism, which requires overproduction. He says he himself is a socialist.

About 18 million tons of food are thrown out in Germany every year. According to calculations by the World Wildlife Fund (WWF), that is equivalent to all the food produced in the country between the start of the year and May 2.

Of this discarded food, 39 percent comes from private households while 14 percent is from retailers. That may not sound like much, but it's still 2.6 million tons per year. The discarded items include yogurt with passed sell-by dates, bruised fruit, or even bread baked that same day. It's not only the supermarket shelves that are luxuriously stocked, but also their garbage bins.

The result is that those looking for a free meal in their garbage bins can find easily find it. The only catch: Dumpster diving is considered theft. Anything that is found on a given property legally belongs the property owner or the renter, including waste. Strange, perhaps, but it's the law.

An attempt by the Hamburg city-state justice minister, Till Stephens of the Green Party, to legalize dumpster diving failed at the national level -- but the ensuing debate has now popularized the idea. Because dumpster diving, these days, is less a question of need and more an issue of responsibility. Dumpster divers are demonstrating a desire to live sustainably. They are rebels of consumerism -- including the group in Aachen, even if it was just for one night.

The tour guide, Walter, explains the rules. First, wear plastic gloves, and don't dig through the dumpster too energetically, because it is easy to get injured if there are glass shards, "and then shit will get into your blood." Rule two: Stay quiet so the neighbors don't get scared and call the police. Rule three: Carefully check what is still edible. Leave moldy mushrooms or bread behind, because even if only one part of it has mold, the whole thing will be bad. On cheese, however, mold can be cut off.

The tour begins with two disappointments. A Rewe supermarket whose dumpster was until recently a treasure trove has recently secured it with a lock. When the group arrives at Lidl, the gate is closed and they cannot even get on the property. Time for rule four: It's better not to dumpster dive on closed properties. Climbing over the gate would be trespassing.

The Penny Markt with the kohlrabi makes up for the earlier disappointments. Now comes rule five: Don't take everything, leave some for other dumpster divers. And rule six: Leave the site clean. At the end of the tour, which lasts over two hours, the booty is spread out on a field and all can serve themselves. The atmosphere is celebratory.

A Patron Saint of Dumpster Diving

Recently, the dumpster diving movement has acquired something of a patron saint, a 42-year-old named Cornelius Strangemann who owns the Lestra department store in the northern German city of Bremen. His father founded the business 50 years ago and today it has 180 employees, and 25 million euros in annual revenues.

"Throwing away food hurts me," Strangemann says. "Just imagine, animals were raised and slaughtered, pineapples and avocados are shipped around the world -- only to ultimately end up in the garbage."

For 10 years now, Strangemann has been allowing dumpster diving on his property. Back then, he discovered students at night who were going through the bins. He says they were scared, but he told them, "I'm not going to stop you."

He only became famous a few of weeks ago when Germany began discussing the dumpster diving ban and Strangemann posted signs on his store's dumpsters with encouraging words and tips for proper dumpster diving. Since then, he has gained a reputation as a good capitalist.

Now, 20 to 30 onlookers come to Lestra every day, attracted by the media reports. Strangemann isn't fond of the moniker "dumpster tourism," saying he is worried it might make other stores wary of emulating his welcoming approach to the practice. But he claims there have been only a small number of negative reactions on Facebook or on his website -- with people saying things like: I would never shop somewhere where others are digging through the trash. But he says there have been many positive reactions.

And suggestions. People argued it would be better to send the leftover food to people in need, to which he says facetiously, "Yeah, should we put together packages?" He adds: "We are also a business. I can't just do charity." But he has implemented one suggestion: His store now places food items on a wheeled cart so that nobody needs to crawl through the bins anymore.

Strangemann has become friends with a Bremen dumpster diver whom he knows from their joint TV appearances. Katarzyna Swendrowski, 32, previously worked as a caregiver for wild animals, but now runs workshops on minimalism, sustainable living and mindfulness. She is a vegan and the mother of nine-year-old Tadeusz.

Swendrowski has been dumpster diving for six years, though not at Lestra, because the department store is too far from her apartment. She frequents another store and also pokes through the dumpsters of the weekly market. Several stands there also leave her leftover goods. Every couple of weeks she invites people for a so-called leftover party in her living room, in exchange for money or a small service task, and documents it on Instagram.

Strangemann says he has even climbed into a dumpster himself -- in his suit.

Swendrowski is a moderate activist. She believes that it is not "expedient on the long term" to attack supermarket managers online, merely because they don't encourage dumpster diving. "It is not the job of the salesperson to think about every unsold head of lettuce or every carrot," she says. And sometimes, she argues, it's also the customers' fault if the food goes bad.

There is, for example, the issue with the banana. "People see a cluster of four, five, six bananas on the shelf, then tend to remove one for whatever reason and put it back," says Strangemann. Since hardly anyone buys individual bananas, these often remain on the shelf until they go brown.

Strangemann says he has climbed into his dumpsters himself, even in a suit and tie. "I'm always dressed like this, even at home when I'm mowing the lawn." He says he climbed in to rescue apples to feed to horses.

The fact that Strangemann supports dumpster diving isn't in itself a huge breakthrough. He is merely expanding the circle of people who can pick up his waste from garbage collectors to consumers.

But other business owners aren't. If you inquire at Lidl, Aldi, Rewe or Kamps, one of Germany's biggest bakery chains, what their policy is about dumpster diving, you will first be given a list of all the things the company does to avoid throwing away food.

They say they support local foodbanks or they turn buns into animal feed. Recently, Aldi started selling fresh milk in packaging that suggests a laxer relationship with expiry dates. It says: "Smell me! Try me! I'm often fresh for longer!" But some are trying to prevent dumpster diving as best they can. Lidl, Rewe and Aldi Süd place their dumpsters in areas where they are not publicly accessible. Aldi Nord refuses to comment on its dumpsters.

In June, the Justice Ministers' Conference -- the gathering of all state justice ministers in Germany -- tackled the phenomenon, with a majority deciding against legalization because it would have "raised complicated legal questions." One example was whether property damage and trespassing should also be exempt from punishment. They argued that "hygiene and ethical reasons" also argued against it.

Recently, though, prosecutors elected to discontinue one case of garbage theft, partly thanks to the efforts of lawyers like Max Malkus. The 29-year-old believes dumpster diving is legal -- for personal reasons, because he himself dumpster dives, but also for professional ones, since he represents other divers as well. His office is located in the building where famed German Marxist Karl Liebknecht was born in Leipzig. It's not a coincidence, but rather, as he puts it, a "statement."

He is currently representing two students who would like only their first names to be used: Caro and Franzi. Last year, they were caught by the police dumpster diving on the property of an Edeka supermarket in Olching, near Munich. The police informed the manager of the market, who initially filed charges against the two but later retracted them because of what Edeka described as "countless public attacks and insults."

In January, a district court found Caro and Franzi guilty of theft. Malkus has appealed and intends to keep fighting until there is an acquittal. "There is nothing more obvious than the fact that an object that someone throws into the garbage bin is considered owner-less."

The court's sentence for the two women isn't without irony. They weren't just handed a fine of 225 euros each -- though the fine was suspended -- but they also have to volunteer for eight hours each. At a food bank. 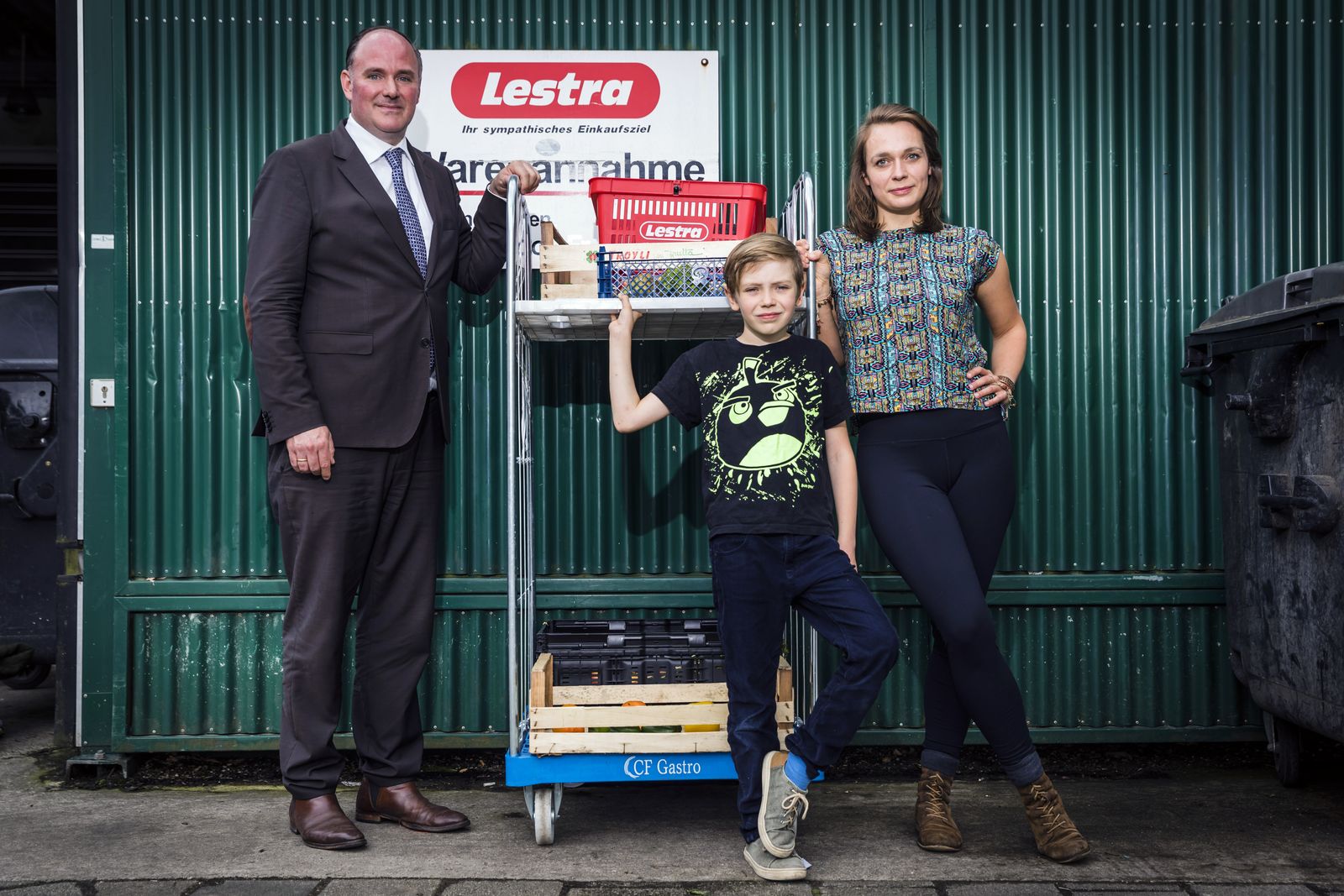 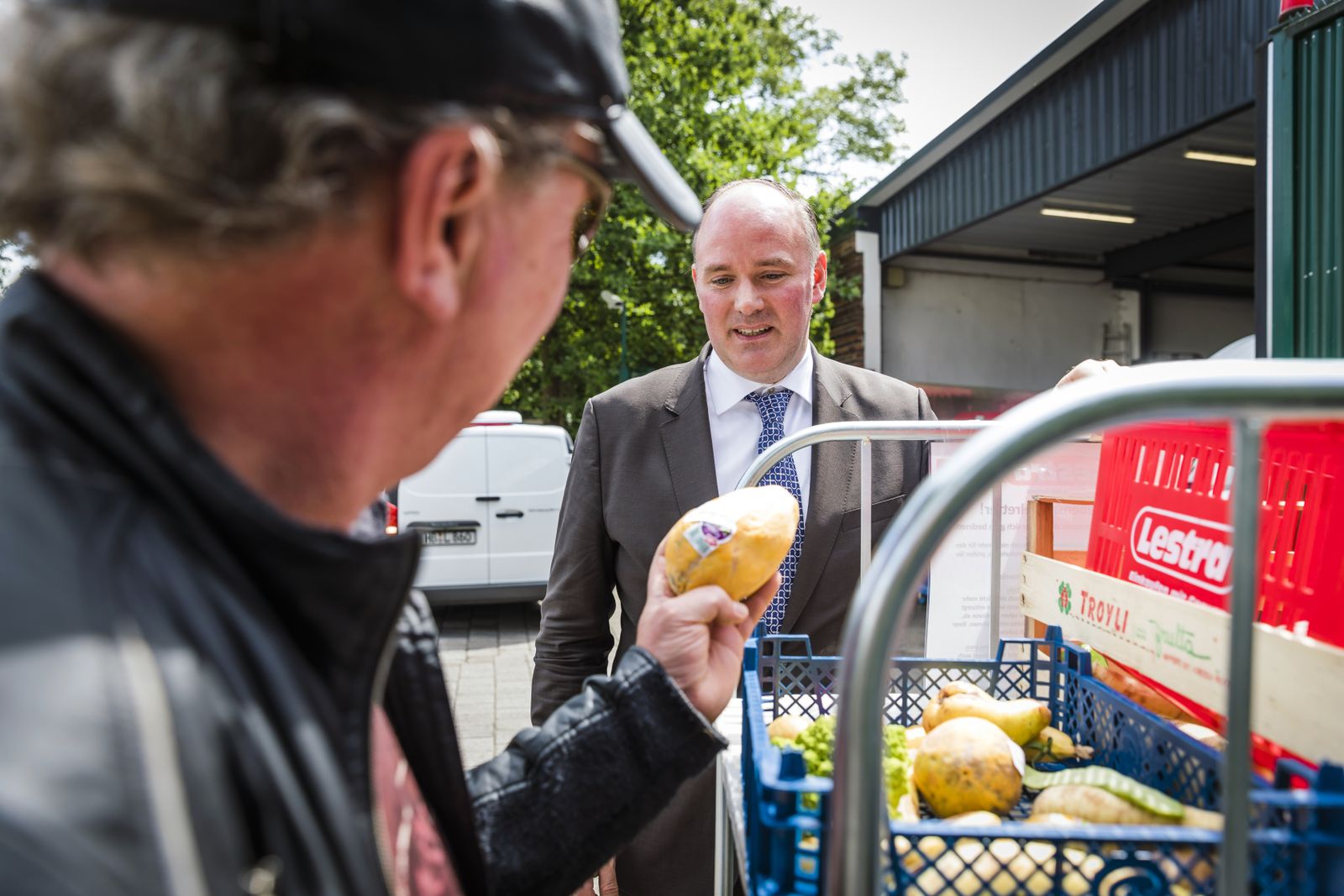 Strangemann says he has even climbed into a dumpster himself -- in his suit.