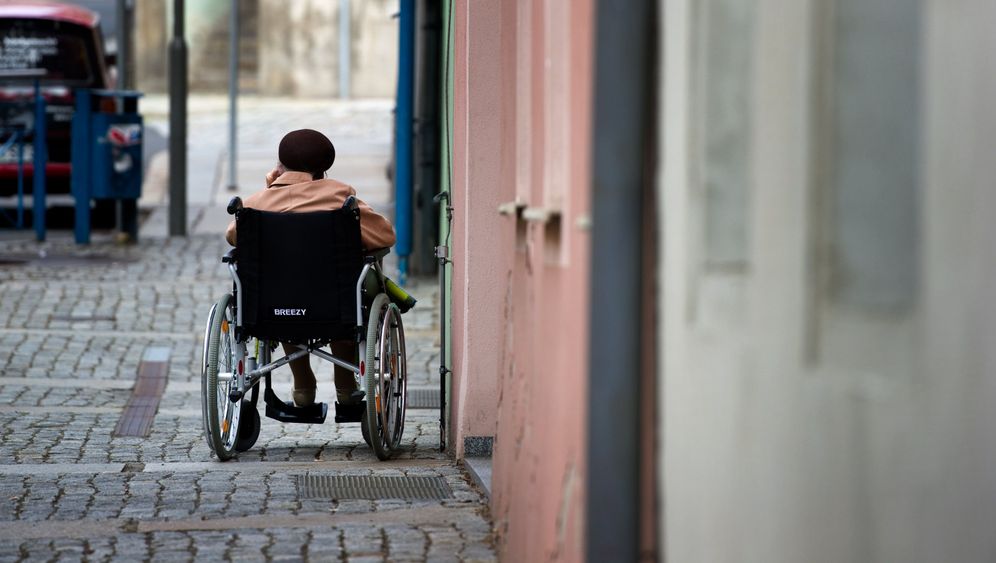 Even during these cold winter months, Erna J. regularly opens the balcony door of her small, two-room apartment in the Berlin district of Neukölln. The 93-year-old places a bowl of peanuts on her flowery carpet and watches the blue tits flutter into her living room and steal nuts. "The little birds are my subtenants," she says.

Aside from the birds, hardly anyone visits the elderly woman anymore. Erna J. has white hair and black leg braces and, like many people her age, is suffering from extreme loneliness. She was born shortly after World War I and moved into this apartment 50 years ago. Ten years later, her husband died. She has outlived all of her siblings and girlfriends. Her husband didn't want any children. "I should have insisted on it," says the former cook, "and then I perhaps wouldn't be so lonely today." Her phone almost never rings -- and when it does, there is usually someone from the health insurance company on the other end.

One day, she collapsed on the bathroom floor. With her last ounce of strength, she managed to crawl into the bedroom and dial the emergency number. Then firefighters broke open her door and helped her to her feet. Now she's feeling better, but she's still afraid that something like this could happen again -- and she could find herself helplessly sprawled on the floor. "To keep myself from stumbling, I've removed all the runner rugs and bathroom mats," she says.

At the same time, she's not ready to move into a nursing home yet. Her apartment gives her independence, she still enjoys cooking and she can still wash herself without any help. And, at home, she can decide when she gets up and when she goes to bed.

More than 2 million men and women in Germany over the age of 80 live alone, and most of them ended up isolated when their spouses died. Experts anticipate that their numbers will grow considerably thanks to today's increasing life expectancy. A study by Germany's Allensbach Institute finds that senior citizens in Germany are healthier and fitter than at any other time in history. Nevertheless, it's also true that people over the age of 70 spend an average of 17 hours a day alone -- longer than any other demographic group.

According to the German Center of Gerontology (DZA), over 20 percent of Germans over the age of 70 are in regular contact with only one person -- or nobody. One in four receives a visit less than once a month from friends and acquaintances, and nearly one in 10 is not visited by anyone anymore. Many old people have no one who still addresses them by their first name or asks them how they are doing. For many of them, soap opera actors have become a kind of substitute family.

What's more, the fact that more and more people are opting not to have children threatens to worsen the isolation experienced by older people. Indeed, childlessness significantly increases the risk of loneliness. Likewise, since people are becoming more mobile and live less frequently near their aging parents, the older generation can no longer depend on their children to remain an integral part of their lives and look after them someday. Consequently, the risk of loneliness among older people could possibly rise in the future, says DZA director Clemens Tesch-Römer.

The Berlin chapter of Friends of the Elderly (FAM), the German branch of the International Federation of the Little Brothers of the Poor, is working to alleviate this problem. FAM Berlin Director Klaus Pawletko and his colleagues organize activities such as zoo visits, boat trips on Berlin's waterways and discussion groups -- and they match volunteers with senior citizens for one-to-one visits. They also offer a service that they call "visiting on the phone," which gives elderly individuals a chance to at least chat with someone once a week.

Pawletko has seen a lot of poverty during his career, and he thinks it's a good thing that people in Germany are talking about inadequate old-age pensions. However, the social worker says that "old people actually find being alone much worse than their financial difficulties." Still, he adds, hardly anyone in Germany talks about that, and it's generally brushed aside as just a matter of perception.

Nevertheless, it has been proven that, in addition to making people sad, loneliness also makes them sick. Indeed, experts like Pawletko are not at all surprised that there is no age group with a higher suicide rate than the over-80-year-olds. "Many see death as a release," he says. To make matters worse, illness intensifies one's sense of loneliness. Anyone who is weak and has lost his or her mobility often suffers from isolation, says Tesch-Römer.

Irmgard Bielke, 78, knows how hard it is for an elderly individual to overcome loneliness. She lost her husband, Herbert, in 1994 -- and then her daughter, Gabi, a few years ago. Both died of lung cancer. Bielke had stopped nurturing outside friendships because she was perfectly happy with a life that revolved around her little family. "Now I'm paying a heavy price," she says with regret.

Bielke sleeps on her side of the double bed, leaving her husband's old side untouched. On the bedspread lies a cuddly elephant that has been rolled flat from years of snuggling. The stuffed animal belonged to Gabi when she was still a child. Bielke says she often feels completely depressed on Christmas and rainy days. When she can't stand being cooped up in her apartment anymore, she goes to cafés or takes short trips. But she never meets anyone. "It's hard to connect with people when you're old," she says.

Reaching Out to the Elderly

Bielke is more outgoing than most people her age. Many elderly feel overwhelmed just gathering information on the visiting and shopping services offered in their local communities. A number of municipalities and housing associations have realized that they have to reach out to and address the needs of senior citizens. In the northern cities-states of Bremen and Hamburg, for instance, agency workers knock on the doors of senior citizens who live alone and ask a simple question: Can we do anything for you?

In Hamburg, social workers came across an old woman who hadn't spoken with anyone for two years other than the supermarket checkout woman. An elderly man had been living for months in the dark because he had neglected letters reminding him to pay his electricity bills -- and didn't know whom to turn to.

Gabriele Broszonn, 45, is familiar with such cases. She works in Munich for the city-run housing association GEWOFAG, which is taking part in a project called "Preventative Home Visits." In the district of Ramersdorf alone, there are over 800 GEWOFAG tenants over the age of 75. There are even 12 people living by themselves who are over the age of 100.

Broszonn and her colleagues organize assistance for household chores and grocery shopping, get the word out about events for senior citizens and check to make sure that residential units have been altered to better meet the needs of the elderly. Broszonn has sat in the living rooms of more than 200 senior tenants.

Her first visit of the day is at 9 a.m., when she calls on Rosa Doll. It takes a while for the 92-year-old woman, who walks with a stoop, to reach the intercom buzzer. Doll has been living here alone for 20 years -- and she is standing at the entrance to the apartment with a smile on her face. She then shuffles into the living room in her checkered slippers. There, dolls are lounging on a corduroy sofa while zither music plays on the radio. Doll has put chocolate cookies on the table, and she is pouring coffee into cups with floral patterns.

Doll spends her time recording folk music from Bavaria's public radio broadcaster. She has recorded and catalogued nearly 2,000 audio cassettes. "My little tapes," she calls them.

During their conversation, Broszonn asks Doll how well she is managing with the apartment. "My back does ache a bit," Doll replies, adding that it makes it hard for here to get into the bathtub and then get back into an upright position. A support rail on the wall could help her, Broszonn says. "But is that still worthwhile for me? Will that pay off?" Doll asks. Upon leaving, the social worker gives Doll a hug and promises to send someone to install the support rail as soon as possible.

After the visit, Broszonn says that Doll made "a very good impression" on her. She notes that she often sees old people who would be much better off in a nursing home, but many of them are very reluctant to move. "Their apartments are all they have left," says Broszonn. Despite all the isolation and loneliness, she argues, having their own apartment is an important part of the independence that older individuals attempt to maintain, if at all possible.

Fortunately, technology can at least take away senior citizens' fear of accidents. Irmgard Bielke, the 78-year-old whose husband died of lung cancer, wears an emergency button on her wrist. When she presses it, the Johanniter aid organization receives an alarm signal. Erna J., the 93-year-old woman who likes to feed peanuts to birds, wears a button like this on a band around her neck.

Each day, the aid organization receives nearly 3,000 emergency calls from their 110,000 customers. However, with more than half of the calls, no one has fallen down or become ill. Instead, people press the button just to have someone to talk to.

The FAM association has now arranged for Erna J. to be picked up once a month to go play bingo. "It's a real highlight for me," she says.

Earlier, during a hospital stay, she had confided to a nurse just how isolated she felt. The nurse gave her the numbers of employment offices that can arrange for unemployed individuals to be hired to help older residents. "I really had to get my courage up before I called them," she admits.

Now, her shopping is done by one man on Tuesdays and another man on Thursdays. Erna J. has dubbed the two helpers her "Tuesday friend" and her "Thursday friend."