Has Germany imposed a total curfew?

No. But more than two people can't be outside together unless they're part of the same household. Going for a walk with a friend is fine, even if you don't live with them, but groups of three or more are forbidden unless you're family or roommates. A minimum distance of "at least 1.5 meters (5 feet), or better yet 2 meters" should be maintained whenever possible, Chancellor Angela Merkel said as she announced the new measures on Sunday.

What are the new rules for being at home?

In general, contact with people outside one's own household should be reduced to an absolute minimum. However, no mention was made of a ban on more than two people meeting indoors. Parties, however, are still not permitted -- not even inside one's own four walls.

How steep are the fines?

Violations of the new restrictions will be monitored by local regulatory officials and the police. There are no sweeping, Germany-wide guidelines on fines, leaving it up to the individual states to decide for themselves. The western German states of North Rhine-Westphalia and Rhineland-Palatinate, for their part, could impose penalties of up to 25,000 euros ($26,700). That said, Merkel made clear that the new restrictions were not to be understood as recommendations, but rules that will carry real consequences if they are disobeyed.

What else is allowed outdoors?

Going for a run, a walk, riding a bike, playing with your kids or taking your dog out are all fine. So is stationary exercise, like calisthenics, as long as you're not doing it in a group. Going to work is allowed, so is emergency care for children. Grocery shopping, doctor's visits, necessary appointments, helping others in need (e.g. running errands for an elderly person) -- all fine.

All restaurants, cafes and pubs must close. However: You can still have food delivered or go pick it up if take-away is offered and bring it back home. Hairdressers, beauty salons, massage parlors and tattoo studios must also stay closed. Initially, hairdressers had been allowed to stay open, prompting some confusion as to why a profession that involves so much direct contact was still permitted.

Can Germany's state and local governments go above and beyond the new rules?

Yes. Many places already have even stricter rules in place. In Bavaria, for instance, residents are only allowed to be outside with people they already live with.

In other states, people can still meet up with a friend and get some exercise, even if they don't live with that person. This is not possible in Bavaria.

Had people been observing the existing restrictions?

For the most part, people across Germany appeared to be acting responsibly, the authorities reported. Whether in Frankfurt, Essen, Hamburg or along the Spree River in Berlin's government district: Most people were out by themselves, with a partner or with their families.

There were, however, occasional violations. In the town of Neuruppin, near Berlin, for instance, the police broke up six larger parties with teenagers and young adults over the weekend. In Bavaria, meanwhile, the police had conducted some 25,000 checks by Sunday afternoon -- and had to alert 500 people to change their behavior. 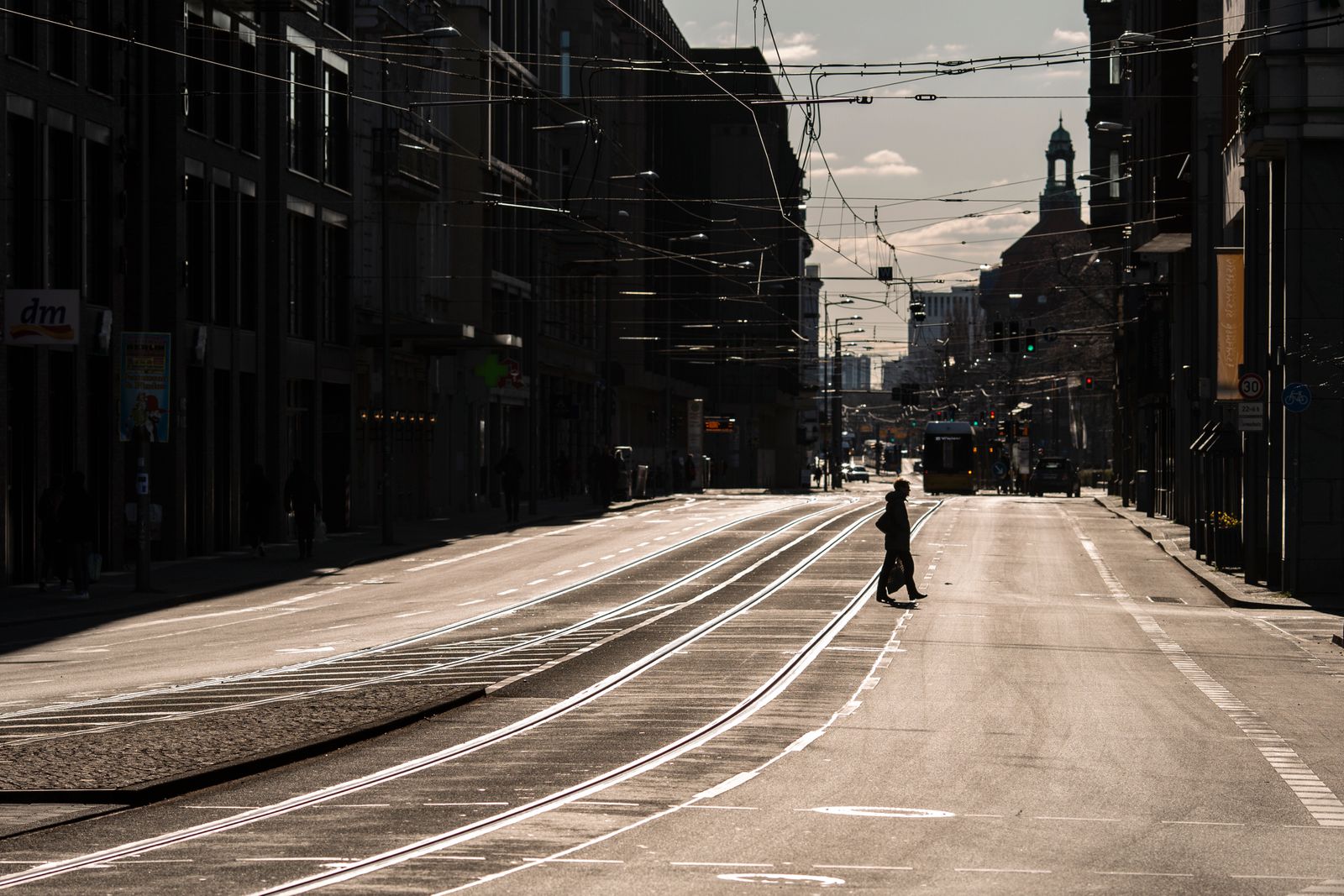 A pedestrian crosses an empty street in Berlin.