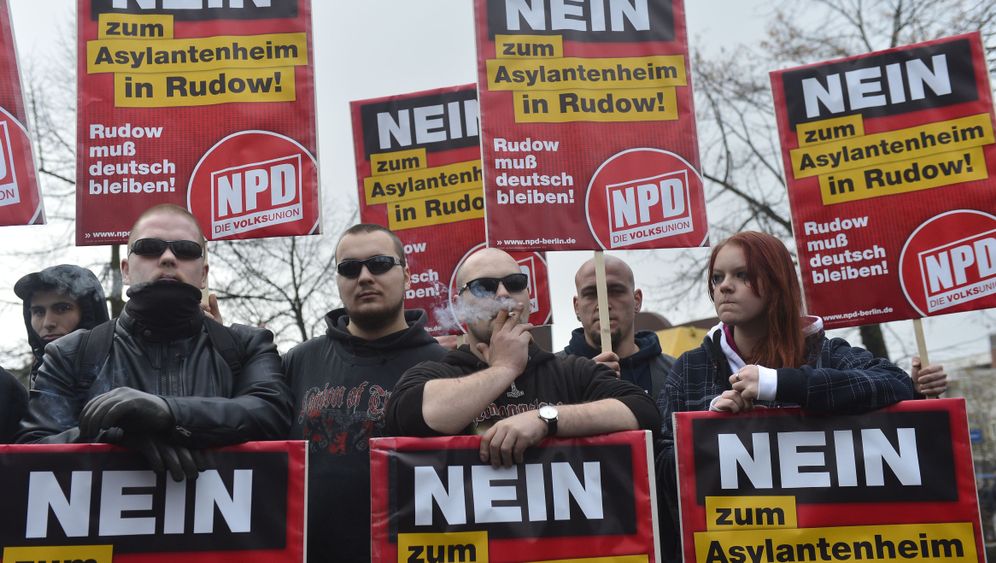 Germany on Tuesday made a fresh attempt to outlaw the far-right National Democratic Party of Germany as the country's 16 regional governments filed a motion with the Federal Constitutional Court. But doubts persist whether the court will rule in their favor, and whether a ban would significantly curb right-wing extremism in Germany.

The states argue that the NPD espouses a racist, violent ideology similar to that of Hitler's Nazi party and that it wants to overthrow the democratic order through militant action. A previous legal bid to ban the NPD failed in 2003 due to mistakes made in preparing the case. Officials say the new motion is more watertight.

"The ideology and the whole NPD party is xenophobic, inhuman, anti-Semitic and anti-democratic," said the interior minister of the state of Rhineland-Palatinate, Roger Lewentz of the center-left Social Democrats.

The motion cites an NPD brochure for party officials which states: "An African, Asian or Oriental can never be a German, because handing out printed documents (…) doesn't change their biological heritage. Members of other races will therefore (…) always remain foreign bodies regardless of how long they live in Germany."

The party also indirectly glorifies Nazi leaders including Adolf Hitler and Rudolf Hess, and trivializes Nazi crimes, say the backers of the motion.

The NPD refers to Allied bombing raids on Nazi Germany as the "Bomben-Holocaust." Its leader, Holger Apfel, is on record saying the Holocaust memorial in Berlin should be razed to the ground.

Mecklenburg's NPD leader Udo Pastörs was convicted of incitement to racial hatred and received a 10-month suspended sentence in 2010 for a speech in which he described Germany as a "Jew Republic," labelled Turkish immigrant men as "sperm cannons" and called US economist Alan Greenspan, the former head of the US Federal Reserve, who is Jewish, a "crooked nose."

Its members include people who belong to militant Kameradschaften, neo-Nazi groups bent on creating "nationally liberated zones" free of foreigners through attacks on immigrants and political opponents.

But Germany, mindful of abuses during the Nazi period, has high legal hurdles for outlawing political parties. The last party to be banned was the West German KPD communist party -- in 1956.

Many politicians remain skeptical that the court will rule against the NPD and are concerned that if it doesn't, the party would enjoy a repeat of the boost it got in 2003 when the last attempt to shut it down failed.

At the time, the Constitutional Court threw out the motion because some of the testimony was from government informants who held high positions in the party. That prejudiced the case, the court argued. The new motion doesn't rely on informant testimony and has a better chance.

But in a sign of how big the doubts are, Chancellor Angela Merkel's government and the Bundestag lower house of parliament declined to sign up to the motion.

The Constitutional Court has already made clear that mere similarity to the Nazi party won't suffice for a ban of the NPD. The key is to prove the NPD is working to destroy democracy through violence. But it may be difficult to prove that it constitutes a real threat, given its small size with just 5,400 members, and its weak national support of just 1.3 percent of the vote in September's general election.

Hajo Funke, a leading analyst of the far-right scene, said the NPD is even more radical than the fledgling Nazi party when it comes to repatriating immigrants.

"It is a neo-Nazi party, it's racist, it's oriented towards violence, it needs civil war to get to the Fourth Reich," Funke told SPIEGEL ONLINE. "The repatriation program it pledged during the election campaign, to send back 10 million foreigners to their supposed home countries, that's more radical than the Nazi Party was in its founding manifesto in 1920 with regard to Jews. Today's it's against immigrants and of course against Jews as well."

"It's crystal clear that it's opposed to our fundamental order in an aggressive, miliant way. There are right-wing terrorists inside and outside the party. The party remains the center of gravity for violent right-wing extremism. But the court may rule that it doesn't pose a direct threat with electoral support of just 1 to 2 percent."

Bernd Wagner, the head of EXIT, a group that helps neo-Nazis who want to quit, agrees that the party has violent members. "Parts of the NPD are actively militant. If you look at rural areas and various organizational structures within the NPD, there are people who are highly militant to the point of extreme violence."

The court is expected to take one to two years to reach a decision. Anti-racism campaigners said the legal bid will help to keep debate about Germany's far-right alive now that public outrage over the NSU terrorist killings has subsided.

The murders of 10 people, mostly Turkish immigrants, between 2000 and 2007 by a group calling itself the National Socialist Underground came to light in 2011 and triggered enquiries into the failure of authorities to combat right-wing extremism, which has claimed almost 200 lives since 1990, according to some estimates.

A ban would end the public funding the NPD is entitled to as a legitimate party. Its income is boosted by its representation in two eastern state parliaments -- in Saxony and in Mecklenburg-Western Pomerania -- and NPD members also have seats on town councils across Germany.

The NPD has been receiving some €300,000 in state funds per quarter but payments stopped following a Constitutional Court ruling last month because the NPD has yet to pay a €1.27 million fine imposed for irregularities in its account statement for 2007.

According to the online service of German public broadcasting's nightly TV news show Tagesschau, the party has received more than €20 million in state financing since 2003, when the last attempt to shut it down failed.

Wagner of EXIT, whose group has helped 514 people to stop being neo-Nazis since 2000, said that banning the NPD would be a blow to the far-right by depriving it of cash, legitimacy and a parliamentary platform.

"But I would warn against hoping that it would significantly push back the far right's scope to spread its message. It has found new ways to reach people with the Internet." Social networks have enabled groups to organize flashmobs and share far-right music, seen by authorities as a "gateway drug" for young people into neo-Nazism.

However, with the NPD gone, it would become harder for the far right to reach and mobilize ordinary people, as was seen this year with the NPD's heavy involvement in public protests against asylum seeker hostels in Berlin and Schneeberg, a town in the eastern German state of Saxony.

"It will always be possible to mobilize die-hard racists but there are also a lot of people who have been attracted by the NPD's claim to represent the interests of the little man, and its pledges to cut red tape, boost their living standards and tackle crime committed by foreigners," said Wagner. People like that will be harder to mobilize without the NPD's veneer of political respectability, said Wagner.

Anetta Kahane, head of the Amadeu Antonio Foundation, a group that combats right-wing extremism, said she was opposed to a ban because it would lead to complacency.

"We've got enough bans, such as the ban on displaying Nazi symbols which I agree with, but outlawing the NPD will spare German society having to confront right-wing extremism," she said. "It won't solve a single problem. In fact it would be a sign of weakness. You wont get racism out of people's heads by banning the NPD. You've got to confront their attitudes."

Kahane said initiatives by politicians and anti-racism groups in the northeast of Mecklenburg-Western Pomerania, where the NPD is very strong, were starting to bear fruit.

She said that more educated people there "are less indifferent than they used to be, they're more active in confronting the far right. There's a great sense among people that they've got to become involved to stop Nazis becoming parent's representatives on school boards, for example."

The NPD has vowed to take the case to the European Court of Human Rights if the Constitutional Court closes it down. The court ruled in 2003 that a party must pose an "immediate threat" to democracy to warrant banning.

The NPD said on Monday: "The motion is an open assault on the right to form a free opposition and freedom of opinion, and therefore on two essential elements of democracy."