On Nov. 9, 1938 -- 75 years ago this weekend -- one of the most notorious events in the history of the Third Reich began across Germany and Austria. Using the assassination of the German diplomat Ernst von Rath in Paris as an excuse, hundreds of Nazis destroyed Jewish-owned businesses, burned down synagogues and savagely attacked Jews and other minorities. The so-called "Kristallnacht" pogrom -- more commonly referred to in Germany as the "November pogroms" -- took place in towns and cities as far apart as Munich, Berlin and Vienna, and resulted in the detention and abuse of thousands in concentration camps. Today the death toll of the pogrom, which lasted several days, is presumed to have been as high as 1,500.

Every year, the solemn event is commemorated in various forms across the country, often with speeches by politicians and historians, and special exhibitions. In the run-up to the anniversary, Chancellor Angela Merkel described it in her weekly podcast as "one of the darkest moments in German history." There was a brief online uproar earlier this week, when a spa in the eastern German state of Thuringia advertised an offer for customers to spend a "long romantic Kristallnacht" at the spa on Nov. 9 (the spa has since said it was a mistake and apologized).

Given the conspicuousness of the anniversary, groups this year are planning some more ambitious and unconventional initiatives in an effort to reach out to young people or others who aren't as aware of this grim moment in German history as they perhaps should be.

The November pogrom is especially significant because "it was the turning point when local persecution became systematic persecution" under Hitler, explains Christoph Kreutzmüller, the author of a German-language book, "Ausverkauf," about Jewish businesses between 1930 and 1945. The violence directed at Jewish businesses and people, as well as at synagogues, in 1938 wasn't only meant to harm the Jewish community, but to impress to an audience of bystanders that things had changed in Germany, that people were now divided between Jews and non-Jews. The anniversary of the pogrom "is a chance to think about categories like perpetrator, bystander and victim -- and to think about the public aspect of this event," says Kreutzmüller, a historian who works at the House of the Wannsee Conference in Berlin.

One of the most conspicuous projects tied to the anniversary is taking place in Berlin. In a joint effort by the Berlin Business Association and the partly government-funded Kultur Projekte Berlin, approximately 100 stores across the Berlin-Brandenburg area will be posting decals on their windows to make it look like they have been broken. "Shop owners of today are remembering the shop owners of that time," says Nils Busch-Petersen from the Berlin-Brandenberg Trade Association. Although less than 1 percent of the German population was Jewish in 1938, he explains, more than 25 percent of all shop owners were.

He had come up with the idea of commemorating the event with simulated broken shop windows several years ago, but it wasn't until the Kultur Projekte signed on that he had the resources to make it happen. The two groups reached out to businesses around Berlin: Some of the participants include KaDeWe, Germany's most famous department store, which was largely Jewish-owned before the war, as well as Galeria Kaufhof, a prominent Berlin department store. Busch-Peterson also points to smaller establishments, like a group of stores on one street in Weissensee, an area in eastern Berlin, he says, that are located next to a shop that sells neo-Nazi apparel. "By putting this in their windows, they want to show that they do not support the Nazis."

But conflating modern-day, non-Jewish-owned businesses with those that were destroyed in the pogrom could also come across as problematic to observers. "The stores aren't saying 'we are victims,'" explains Busch-Peterson. "The German retail industry was deeply influenced by Jewish people, and so we have many reasons to remind people of their role."

Meanwhile, another Berlin government-led initiative is encouraging people to spend Nov. 9 polishing the Stolpersteine, or stumbling blocks, that mark the sidewalks outside the homes of people murdered during the Nazi period. Specially made "stumbling block polishing rags" were inserted into Berlin magazines by Destroyed Diversity, an initiative of the Kultur Projekte marking the 80th anniversary of Hitler's rise to power, with instructions to wet them with water to clean off grime and, if desired, lay a white rose next to the stones as part of a "call to city-wide action."

Each of the stumbling blocks, which are part of a project that began in Cologne in 1995, bears the name of a victim of the Nazi regime, along with the location and date of their death. "It is an entry point into history for young people," says Sören Schneider, from the Stolpersteine Coordination Center in Berlin, "because it locates events in a social environment." On Nov. 9, guides will also give tours of neighborhoods in which stumbling blocks are located and describe local conditions during the Third Reich.

For Kreutzmüller, however, the Destroyed Diversity's polishing initiative is well-intentioned, but flawed. For one, the cloths sent out by the project, which are printed with the words "Berlin cleans stumbling blocks" are too flimsy to do much polishing. "In my experience, you need a special cleaner for the stones," he says. "It's also a pity, because it's commercializing memorial culture." Usually local community members would get together and polish the stones themselves, he says, and "I think that grassroots aspect is important for all memorial culture."

Meanwhile, in the online sphere, a group of German history students and recent graduates have begun dramatizing the pogrom using Twitter. They are live-tweeting the events of the pogroms as if it were 1938, using the handle @9Nov38.

Since Oct. 28, the group, led by recent university graduate Moritz Hoffmann, has been posting dispatches like, "2,000 Polish Jews in Frankfurt are called in for 'passport'-control and locked into a truck" (Oct. 29) and "The Jewish-owned Gelsenkirchen textile business Rode&Co is put 'into Aryan hands'" (Nov. 5). The project, Hoffmann says, was inspired by a similar Twitter experiment carried out last year by the Mitteldeutscher Rundfunk, a German broadcaster that live-tweeted the events preceding and following the fall of the Berlin Wall (which coincidentally also happened on Nov. 9).

"The advantage of Twitter is that we can reach more people," says Hoffmann, who lives in Heidelberg, in the southwestern state of Baden-Württemberg, "and that we can briefly inject these facts into people's everyday lives." The difficulty, he says, is fitting the information into short bursts of texts. In the week since the project began, they have already amassed over 1,400 followers. "You often hear that people don't want to learn about history, but I think this is a nice confirmation that people are still interested."

For Kreutzmüller, these kinds of initiatives, despite their drawbacks, are important because they allow people to think concretely about history. As the witnesses to the 1938 pogrom continue to pass away, the event threatens to disappear into what Kreutzmüller calls "normal history." "Yet, we need to translate history all the time and ask new questions," he says. "It's important it's happening," he added, "but sometimes it's a little awkward." 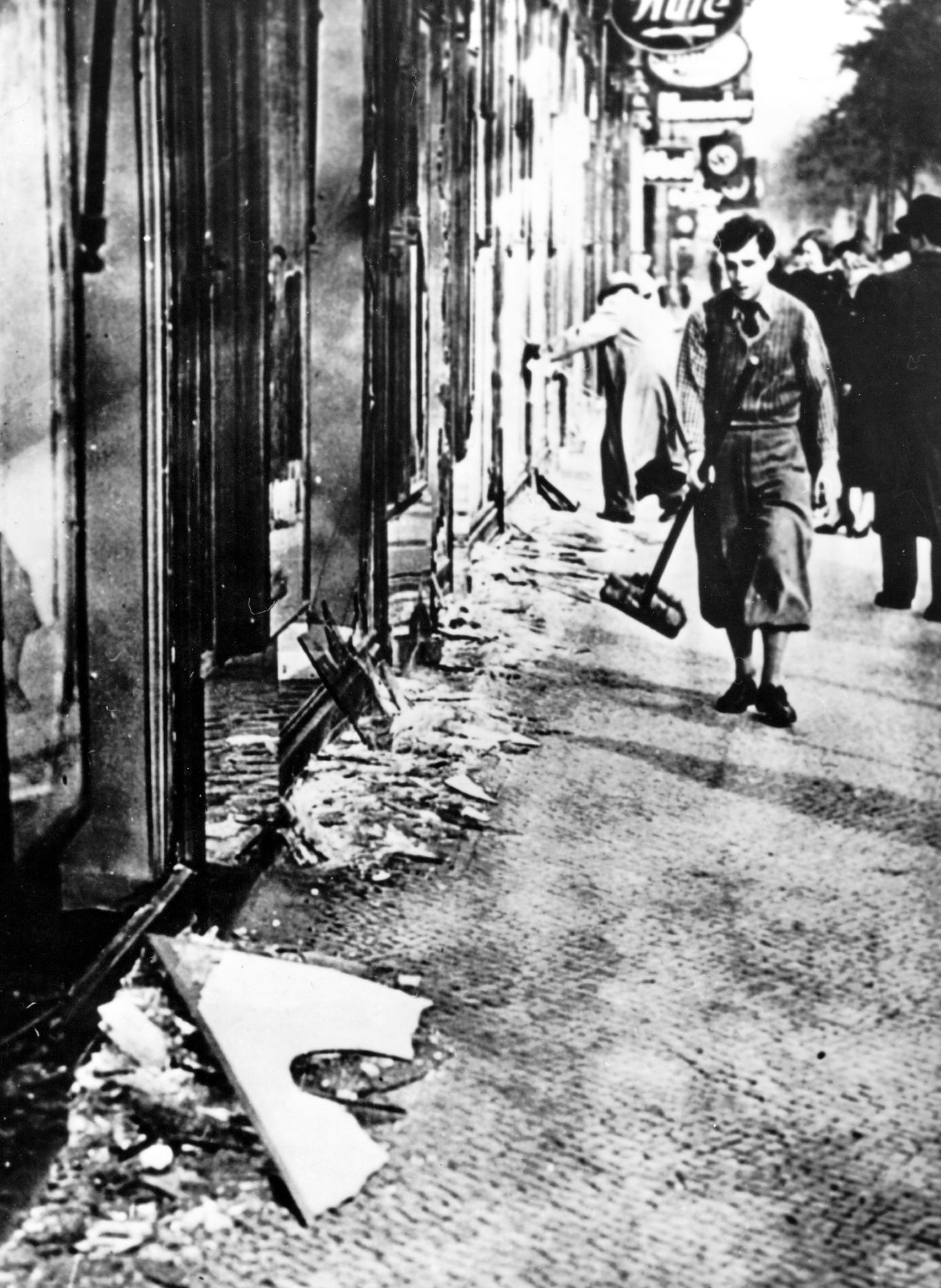 75 years ago, the "Kristallnacht" pogrom marked a turning point in the Nazi regime's treatment of Jews.