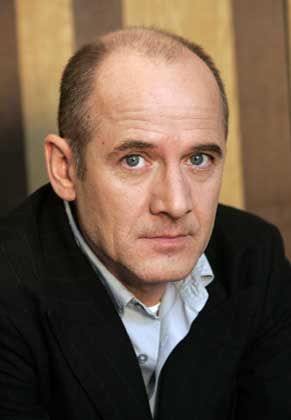 His role as a Stasi officer spying on a playwright was informed by a life in East German theater.

The German actor Ulrich Mühe, who played a conflicted Stasi officer in the Oscar-winning German film "The Lives of Others," has died of stomach cancer at the age of 54.

"Germany mourns an outstanding artist and a great personality," German Chancellor Angela Merkel wrote in a condolence letter to his widow on Wednesday afternoon.

Word of his death only emerged on Wednesday, although Mühe died at his home on Sunday -- when an interview appeared in the newspaper Welt am Sonntag, announcing for the first time that he suffered from cancer.

"Yes, I have cancer," he told the paper. "I'm going through the necessary treatments and I hope to get better soon."

He learned about his condition last year, just as the hype over "The Lives of Others" reached critical mass. The 2006 film was a Cold War drama dealing with a Stasi officer in East Berlin assigned to eavesdrop on a playwright and his actress wife.

Rejected by the Berlin Film Festival, the movie went on to win a Best Foreign Film Oscar for 2006, and in spite of his illness Mühe flew to Hollywood with director Florian Henckel von Donnersmarck last February to pick up the award.

"He didn't want to miss that, even though he was already in pain," said his agent, Ute Zahn. "The Oscars, to an actor, are like outer space to an astronaut."

"The Lives of Others" was the high point of a long and important career in Berlin theater as well as German film and TV. The East German-born Mühe studied theater in Leipzig before director Heiner Müller brought him to East Berlin for a production of "Macbeth" in the early 1980s.

Mühe joined the Deutsches Theater's ensemble group in 1983, and played in a long string of movies and TV shows, including, most recently, a crime series called "The Last Witness" and a satirical film called "My Führer: The Truly Truest Truth about Adolf Hitler."

Shortly after his trip to Hollywood, Mühe underwent major stomach surgery. It wasn't his first big operation: During his military service in the East German army in the 1970s -- when he served as a guard along the Berlin Wall -- Mühe had two-thirds of his stomach removed in a procedure now understood to lead to cancer.

Rumors of his condition had mounted since April, and Mühe made last weekend's announcement to Welt am Sonntag to stop a groundswell of interest by reporters and paparazzi. In the meantime, scripts were piling up on his agent's desk.

Mühe died at his home in Walbeck, in the state of Saxony-Anhalt, where he lived with his second wife, the actress Susanne Lothar, and their two children. "The death of your husband opens a painful wound," Chancellor Merkel wrote in her condolence letter to Lothar.

Mühe also leaves behind a child with his first wife, actress Jenny Gröllmann, who died in 2006 -- also of cancer. Mühe had accused Gröllmann of spying on him under the East German regime, a charge she vehemently denied.