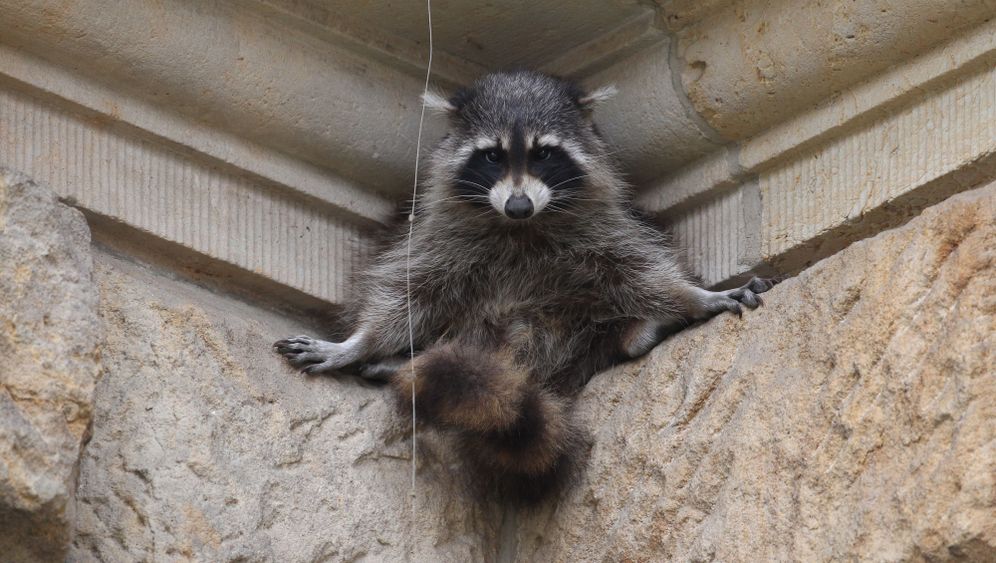 A retired man in Harleshausen, a suburb of the central German city of Kassel, had nothing more in mind than removing the tarp covering his lawn furniture. But then a hissing animal with markings like a safecracker's mask shot toward him and sank its teeth into his left hand. It was a female raccoon intent on protecting her young, and she next attacked the man's foot. The struggle lasted a minute or so before the man staggered into his house bleeding.

That altercation is symptomatic of a nuisance that's spreading through the country. Procyon lotor, the common raccoon, is not native to Germany, but its range is increasing. The population will soon number over a million, according to forest biologist Ulf Hohmann.

These predatory mammals originally from North America can weigh over 10 kilograms (22 pounds). They're known for their intelligence, and many Native American legends assign raccoons the trickster role that Germans associate with Reynard the Fox in European fables. Both the real-life trapper Daniel Boone and the fictional hero of the "Leatherstocking Tales" novels wore fur caps made from raccoon pelts, easily identifiable by their bushy black and white tails.

The first raccoons were brought to Germany in around 1920 to be bred in captivity for their pelts. Their controlled introduction into the wild occurred on April 12, 1934, when Prussian hunting and game authorities released two pairs of raccoons near the Edersee, a reservoir near Kassel. Their stated purpose was to "enrich the fauna" of the area.

A persistent rumor has it that Hermann Göring, one of the Nazi party's most powerful figures, personally ordered that raccoons be released into the wild. The fact that this isn't historically accurate didn't stop British tabloid newspaper The Sun from running an article in 2007 entitled "Nazi raccoons on warpath." The article warned that they "are just across the Channel from Britain after marching through France, Belgium, Holland and Denmark in a furry blitzkrieg" and that they "are invading new territory -- just like the Nazis did."

Competition for habitat space is so high in the raccoons' main population centers -- in the German states of Hesse, Brandenburg and Saxony-Anhalt -- that young male raccoons have started migrating to other parts of the country. The record-holder is one male, radio-tagged by biologists, who made it all the way to Bremen, over 200 kilometers (125 miles) north of Kassel.

One raccoon sauntered into a police station in the eastern German city of Dresden. Another found the front of the Federal Administrative Court building in Leipzig to be a comfortable place to sleep. "A few individuals have even made it over the Alps," Hohmann reports.

Statistics kept by the German Hunting Association (DJV) offer proof of a downright invasion. It calculates that 67,700 raccoons were killed in Germany last season, a new record. Many of them were caught using chocolate placed in cage traps as bait.

There's no law against trapping raccoons -- in fact, quite the opposite is true. The EU recommends exterminating this invasive species on the grounds that it could pose a threat to biodiversity. Hunters complain that raccoons kill partridges and pheasants, devour bats and steal eggs from wild ducks' nests. Raccoons also seem to have developed a taste for the endangered European pond turtle. Still, DJV officials are calling for calm, saying the environmental damage has only been minor so far. At most, they say, there is the potential danger to humans from rabies spread by raccoons.

Tussles with raccoons are more likely to occur on the outskirts of cities, where the animals rifle through garbage cans or raid backyard grills. There are now so many raccoons in the outlying districts of Kassel that residents have taken to weighing down their garbage cans with rocks or tying them shut with bungee cords.

Kassel isn't the only city with a raccoon problem. In cities such as Dresden and Bielefeld, the animals have started banding together to harvest entire cherry or plum trees. Another problematic occurrence is when these marauding gangs make their homes in building attics, where they tear the insulation to bits and leave their droppings everywhere.

Some residents fight back with steel traps or poisonous gas. Some even eat the comical pests, which are said to taste best marinated with celeriac and onions.

Softhearted animal lovers and activists feel the raccoon deserves protection despite its non-native status, and they are appalled by such crude responses. Ignoring all advice, they intentionally attract the animals to give them milk and advocate anything but shooting them. Wildlife biologist Frank-Uwe Michler recommends tearing down old sheds and abandoned buildings to prevent unnecessary damage to building roofs.

Meanwhile, forest wardens in the Habichtswald, a nature reserve that borders on Kassel's city limits, are determined to fight the animals' encroachment in a more direct way: with bullets. They're planning a hunt for October in which raccoons are the sole quarry. The wardens will take up position in their hunting blinds at night since these nocturnal animals are often out until dawn in the fall months, searching the forest floor for acorns.

Still, hunting alone won't take care of Germany's raccoon problem. Over the past 70 years, they have proved themselves experts at surviving in a foreign environment and have gradually conquered new territory. "The species is firmly established here," says Hohmann.