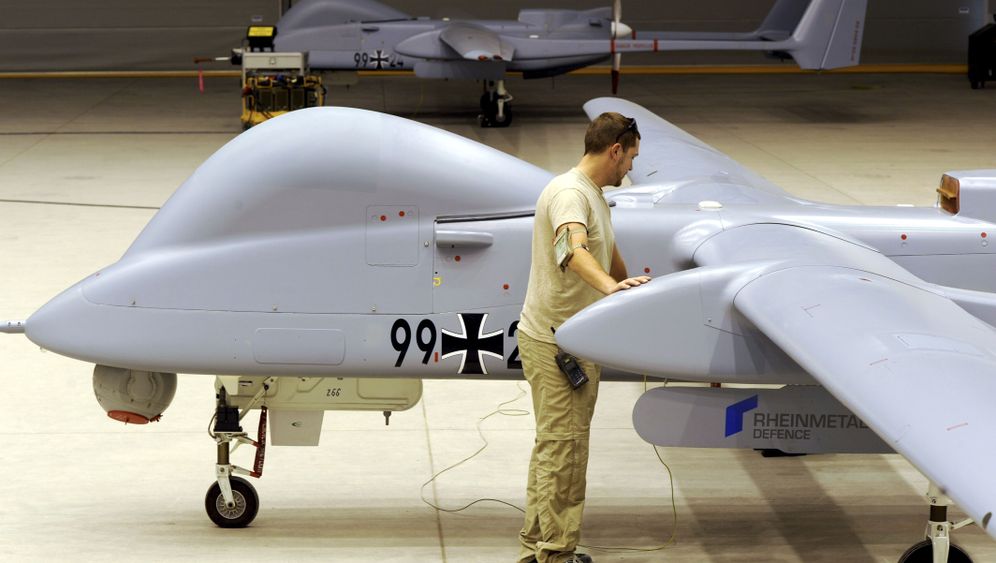 Bowing to pressure from the German armed forces, the Bundeswehr, the federal government in Berlin is preparing to deploy armed, unmanned drones in foreign conflicts. In an answer to an official query made by the far-left Left Party, which has been obtained by SPIEGEL ONLINE, the German government wrote that its experience in foreign combat operations has made it clear that reconnaissance vehicles must be armed "in order to provide protection against sudden and serious changes in the situation."

As opposed to unarmed surveillance drones, these aircraft could attack known targets in a "quick, precise and scalable" way, the document stated. "In addition, the new features would confront opposing forces with a permanent and unpredictable threat that would limit their ability to act." It went on to say that the weapons boost safety and security through "credible deterrence," pointing to the "Predator" drones used by the United States as a possible model.

The government decision on armed drones brings the German air force one step closer to implementing a long-standing plan to dramatically alter the country's drone fleets. Unlike the United States, Germany has only been using unarmed drones in combat. For aerial reconnaissance in Afghanistan, the Defense Ministry leases the drone model "Heron 1" from an Israeli consortium and also relies on drones built by the German company Rheinmetall. But the government's contract with the Israeli group runs out at the end of 2014, and the military has been searching for a replacement for some time now.

The move is likely to rekindle the debate within the government over fighter drones. Last year, the head of the German air force, Karl Müllner, landed in hot water shortly after assuming office for vehemently supporting the purchase of armed drone systems. At the time, the government remained cautious and called for a "broad discussion" in parliament before making any decision.

Nevertheless, Defense Minister Thomas de Maizière has always been open to having armed drones. "Aircraft are allowed to carry weapons, so why shouldn't an unmanned aircraft also be able to do so?" de Maizière, a member of Chancellor Angela Merkel's conservative Christian Democratic Union (CDU), said in an interview with the German daily Die Welt. "The new weapons have a huge advantage: They are more targeted. And the better one can target, the less damage there will be," he said.

With its move, the German government is entering a political minefield. Even the use of unarmed drones is a issue of heated debate in Berlin. Drone opponents exist the world over, but many in Germany are concerned that drones will be misused to spy on people within the country. Criticism against armed drones is even sharper. Many security experts in the political arena point to the US's intensive reliance on drone warfare as a chilling example of the use of armed, unmanned machines -- the legality of which is questionable under international law.

Within Germany, politicians have been divided on the issue. Those within the CDU and the center-left Social Democratic Party (SPD) view drones as a necessary evil of security policy. Meanwhile, the Left Party, the Green Party and even many within the CDU's governing coalition partner, the pro-business Free Democratic Party (FDP), are opposed to the plans.

"I'm vehemently opposed to the Bundeswehr's drone strategy," said Andrej Hunko, a parliamentarian with the Left Party. "I'm also critical of expanding the use of reconnaissance drones." Hunko said that he fears that such aircraft won't just be used abroad, but that they could be used domestically as well.

Green Party officials have also expressed their opposition to the move. "The government's plans to order armed drones are evidence of a blind and irresponsible handling of progress in terms of military technology," parliamentary group leader and chancellor candidate Jürgen Trittin told SPIEGEL ONLINE. "We oppose the government's plans. By lowering the bar for the use of military means, the deployment leads to a further blurring of the limits of military force. Procuring armed drones, if at all, can only proceed after the ethical issues and questions of international law have been successfully clarified."

Such sentiments are also being echoed by members of the opposition SPD, including senior parliamentarian Thomas Opperman, who told SPIEGEL ONLINE: "I'm opposed to a hasty decision because this brings a new quality to warfare. We need a broad societal and parliamentary debate about the ethical and legal boundries of the deployment of combat drones and not some backroom decision. It is entirely inappropriate that the public and parliament have learned of these plans more or less by accident."

The government, for its part, has refuted that suggestion. Unmanned flying aircraft of all kinds were "not intended to have the effect of escalating" conflict, it said in response to the Left Party's inquiry. In the future, they will be used "exclusively within the framework of their constitutional and mandated assignment."