Rudi Richardson knew something about what it meant to be a black man in the United States. But after being deported to Germany, the country where he was born, shortly before his 47th birthday, he had to start figuring out what it meant to be black and German -- in a land he barely remembered and whose language he didn't speak.

He started life as Udo Ackermann, born in a Bavarian women's prison in 1955. His mother, a Jewish woman named Liesolette, was serving a prison term for prostitution. His father, whom he never met, was an African-American serviceman named George. Rudi was given up for adoption. 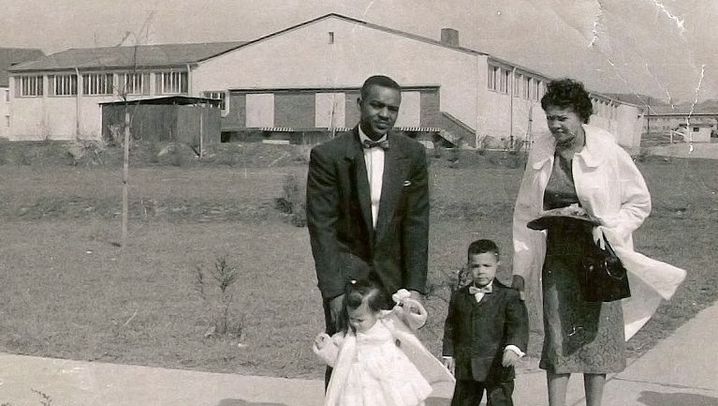 Like thousands of other postwar children with black GI fathers and white German mothers, Richardson was raised by an African-American military family in the US. He has spent his life trying to find where he fits in.

Born in an era when Germany was still grappling with its responsibility for the Holocaust and when the US Army had a policy of not acknowledging paternity claims brought against its soldiers stationed abroad, some of these children were put up for adoption in the United States. At the time, Germany judged itself incapable of absorbing these "brown babies" -- as they have come to call themselves. In the late 1940s and 1950s, efforts were made to match them with African-American military families, many of whom were stationed around Germany at the time.

The adoptees grew up in the United States, many with no idea they were adopted or that they were half-German (for information on the difficulties encountered by black GIs wanting to stay with their German girlfriends, read the sidebar on the left). Scattered across the country, many of the children were forbidden to speak German in their new homes. At the time, it was believed that continuing to speak German would damage their ability to learn fluent English.

After a stay in a German children's home where he says he suffered sexual and physical abuse, Richardson was adopted by a military couple as a toddler. After a few years living on base in Germany, the family returned to the US. It was about that time, Richardson recalls, that his adoptive mother began a downward spiral of alcohol addiction and mental illness.

Richardson was 17 when his parents finally told him he was adopted. He was sitting across from a probation officer following an arrest for joyriding -- and he was given a choice: face the charges in court, or join the Army. Eager to be away from an increasingly unhappy home, Richardson chose the latter.

That's when he discovered his adoptive parents had never had him naturalized as a US citizen. He says he was told he'd get citizenship automatically after being honorably discharged from the Army, but it never happened. This caused problems for him three decades later, when he was deported to Germany in 2003 after spending time in prison for drug possession and petty theft.

His arrival in Germany was a "horrible experience," Richardson said. "There were three policemen waiting for me, and they escorted me out of the plane to the police station in Frankfurt. They interrogated me for two hours.... The police said that I had to tell them every crime I had committed in the United States. They told me they could convict me under German law.... I was spooked, so I told them everything."

He counts the next 18 months in his "native land" as among the worst in his life. He was often homeless, suicidal and had resumed abusing drugs, including cocaine. One of the few positive experiences he remembers was meeting other black Germans through the Initiative Schwarze Menschen Deutschland (Initiative for Black People in Germany, in German only). The group was founded in the mid-1980s as a forum for people of African descent in Germany and a way to fight racism.

Not all of the children fathered by black GIs were adopted by American families. Although a 1968 study estimated that up to 7,000 black German children were adopted by Americans, many others remained in Germany with biological relatives or as wards of the state. Some of them, like writer Helga Emde and artist Ika Hugel-Marshall, went on to found the Afro-Deutsch movement in the 1980s, raising their voices in literature and the media after years of being statistically invisible and yet uncomfortably conspicious.

But for many black Germans raised in the US, it was the rise of the Internet that sparked their awakening. It connected them to information about their parents and helped them find a common identity. Web sites became a supranational meeting point, a place where black Germans could meet others who share similar experiences.

Not the Only One

"Many of us never knew we were adopted, and many of us thought we were the only one," said Rosemarie Pena, who was adopted as a two-year-old in 1958. She recalled feeling that she was "different" as a child in a way she couldn't quite pin down. Pena was 38 when she found out that she had been born in Germany. She said her subsequent search for biological family, and for others like her, is about knowing her own story and being able to share it with her descendants.

"I can leave them [her children and grandchildren] a legacy and a history that I didn't have. They need to see me as a victor, and not a victim," Pena said.

Pena's Web queries led her to an Internet group of German adoptees of all races called Geborene Deutsche, and then to a e-mail list called "Black Germans." When its administrator stepped down, Pena volunteered to run it, and she now serves as president of the newly incorporated Black German Cultural Society.

Pena used her skills as a Web designer to expand the Black German Cultural Society from an e-mail list to a full-fledged Web site and social network at BlackGermans.us. The community has nearly 200 members on both sides of the Atlantic, adoptees and non-adoptees. A spinoff site, Black Germans in Education, launched in April.

What it Means to Be Black and German

"It's important for me to find a way to engage both sides -- the Germans who remained in Germany and those who went to the States," Pena said.

The community offers a place to parse what is often a difficult history -- of unknown parentage, half-remembered faces and questions about being black, or German, and what it means to be both.

Members of the Black German Cultural Society can post old photos in the hope that others can identify the subjects and help locate a long-lost mother, father, or sibling. There are subgroups according to interest and background: Black German Cooks; Black, German and Jewish. There's a group for bloggers and another for people trying to learn (or relearn) German.

The organization also engages a search consultant, Henriette Cain, to help people looking for their birth families. It's a process Cain is familiar with, having undertaken it herself. She counts herself as extremely fortunate: Not only did she locate her birth father and mother, but she has reunited with her biological sister, who was adopted into a German family, and three half-brothers born after her biological mother married and moved to the States.

So far Cain has helped more than a dozen adoptees find birth family members with help from several Internet databases and online genealogy resources. When she hits a wall -- or just wants feedback on some ideas, she can log on to BlackGermans.us and post a message in the forums.

A Yearning for Answers

"We're scattered all over everywhere. It's almost impossible to come together in one place, in a brick-and-mortar place. And we're so busy, with the modern world, and we just don't have the time," Cain said. But with online forums, "At 2 a.m. you can go and write someone and have an answer by 6 a.m."

A similar yearning for answers and companionship led Daniel Cardwell to launch his Web site, GrammerChildren.com, in 2007. It aims to tell the story of a subset of adoptees, who were brought to the United States by an African-American journalist and socialite named Mabel Grammer. Grammer had moved to Germany with her soldier husband, and began volunteering at local orphanages where she discovered dozens of "brown babies." Grammer began matching some of the children with African-American adoptive families.

But Cardwell, who is writing a book about his experiences, has learned that his own story is not that simple. Brought to the United States as a four-year-old and adopted by an African-American couple in Washington D.C., he was raised believing that he was a very light-skinned black man. It was not until he began trying to find his biological parents as an adult that he discovered his mother was a half-German refugee from Poland, and his father was native Hawaiian who was classified as "colored" by the military because of his skin color.

"I've been run out of white people's houses: 'Who's this black person you're bringing in here?' I've been run out of black people's houses: 'Who's this white person you're bringing in here?'" Cardwell said of his adolescence and early adulthood. "There is no belonging, which is what brown babies sought most."

'A Sense of Identity'

For Rudi Richardson, online communities have given him a outlet for his autobiographical poetry, which deals with themes of loss, alienation, healing and hope. The Internet also led him to Heide Fehrenbach, a historian who has studied black Germans and how race is viewed in Germany. She put him in touch with the Black German Cultural Society, which Richardson said is an important reminder that there's a place where he belongs, regardless of what country he's in.

"It gives me a sense of identity," Richardson said. "It brings me to my roots. I could just feel it in my soul, that I'm not alone. That these guys have similar experiences, and they're beautiful people. And we are a part of history."

Once Richardson had finally secured his German citizenship papers, he left almost immediately for London, using his new status as a European Union citizen to secure residency there in 2005. He had decided that his prospects in Germany were dim. Despite his efforts, he couldn't master German well enough to get a job, and he said that white Germans he encountered couldn't look past his brown skin to give him a chance.

He has been clean for three and a half years. In 2007, he founded a nonprofit called Streetlytes, which provides assistance to homeless people in London.

"I'm helping the marginalized," Richardson said. "I'm helping the people who have issues with being rejected by family, being abused. That is where the healing is, for me and for them. And that is what I will continue to do for the rest of my life."