It was an unlikely place for a media frenzy: inside the non-descript conference rooms of a building in central Berlin. But this weekend, members of the local and international press corps jostled and elbowed to get closer to the star of this particular show. Film crews fought for the best vantage point, photographers held their cameras aloft to get the best shots and reporters scribbled furiously in their notebooks. 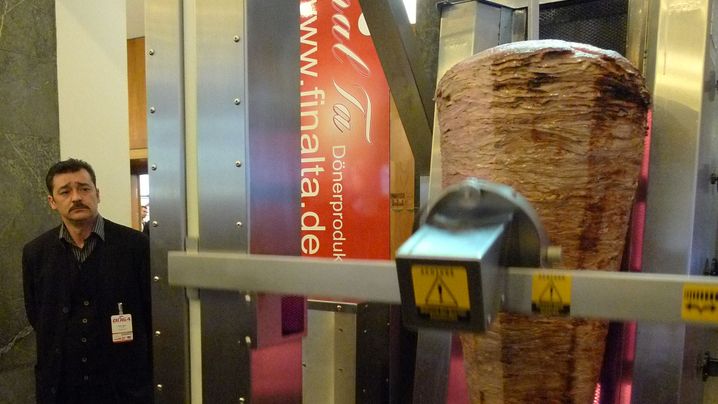 The mechanical attraction is the brainchild of Cypriot businessman, Ahmet Kalyoncu, who lives in Vienna but who hopes to sell his Döner Robotu machines to some of the estimated 15,500 kebab businesses all over Germany. A digital camera on the top of a stainless steel cage guides the blade down the spit of döner meat within, and the whole thing can be operated by remote control.

And where better to introduce the first döner robot than at the first ever döner kebab trade fair in Berlin? Since Turkish immigrants first started selling döner kebabs in Berlin in the early 1970s, complete with sauce and salad (a far cry from how they did it back home, a simple meat-filled pita), the fast food has grown to become one of the city's, and one of Germany's, favorites. It is now estimated that there are over one thousand more döner stands in Berlin than there are in Istanbul -- and despite the low price tag of between €2.50 and €4 per sandwich, the business is worth an estimated €2.5 billion annually.

Last Saturday, the 40-year-old German döner industry finally got its own trade fair. Asked why there hasn't been an event like this before, Tarkan Tasyumruk, the boyish-looking chairman of the Association of Turkish Döner Manufacturers in Europe (ATDID) told SPIEGEL ONLINE: "The producers are almost all family businesses. They're almost entirely focused on production, sales and just working -- day after day. They are so busy doing this that not much thought has gone into looking at the big picture. Until now."

The event, which took place in two large rooms decorated with flags and flowers, attracted the suit-wearing elite of Berlin's döner business. Exhibitors ranged from purveyors of kebab technology and kitchen uniforms to kebab spice merchants. Automakers Renault and Mercedes were also there, peddling cold storage vehicles. Some stands offered enticements: One had ball point pens, another a half-emptied box of sugar-dusted Turkish Delight.

Visitors included Remzi Kaplan, the stout millionaire head of Kap-Lan Döner Production, the largest döner maker in the European Union. The entrepreneur, who employs around 150 and who is also known as the city's "Kebab King," held court in one corner, shaking hands and kissing colleagues' cheeks.

"The market is under pressure," he told SPIEGEL ONLINE. "We must become more professional. And this (the trade fair) is a good beginning. By the third time, or the 10th time, we will be holding this in the Deutschland Hall," Kaplan boasted, referring to a local arena with a capacity of 9,000. "After all this is the capital of the döner."

The dönor kebab professionals -- ATDID has over 50 members -- had plenty of thorny kebab-related issues to discuss. One topic was the ever-changing cost of a döner kebab and whether lower prices could sustain a small business. The idea of vocational courses for döner kebab workers was also mooted, given that it is hard for those not of Turkish extraction to get into the trade, let alone learn it.

In light of recent scandals about the freshness of the meat being used in the rotating roasts there was discussion about hygiene standards and quality control. "What is urgently required is the establishment of a standards system for quality control," said Tasyumruk. "The ATDID see this as our duty. This year we will be dispensing a 'seal of approval,' that will involve regular examinations (of premises) and quality controls."

One thing convention-goers were not doing on Saturday was eating döner kebabs. The cafeteria offered up a decidedly German menu of meat patties, boiled vegetables and cheesecake.

Still, the crowd could grab samples from a small plate of meat shavings freshly harvested by the Döner Robotu. Among them was Huseyin Muslin, who used to be in the trade too. In fact, his stand, which opened in 1972, was one of the first in Berlin. But he isn't as enamored of the machine as some. "It's just something for customers to see," he says dismissively. "You can actually cut the meat better by hand. This way, the meat loses all the juice."

Most of the old hands actually agreed that a master döner-meat cutter would outperform the robot in terms of quality. But, as Kalyoncu protested, master-meat cutters were not easy to find, particularly in Germany. "In Berlin it's not so bad," Kalyoncu said. "But in the rest of Germany, it is more difficult to find someone who can cut properly. People think anyone can do it but it's not true."

The organizers say that around 412 people were at the opening festivities but it seemed likely that several hundred more had wandered through later in the day. In mid-afternoon, for example, three middle-aged Germans arrived -- and they seemed caught between bemusement and confusion. "We are visiting friends in Berlin. We just had breakfast around the corner," explained the tourists from just outside of Hannover. "And we decided it would be interesting to come and take a look."

The ATDID plans to hold the trade fair again next year in the hopes of attracting more interest from the fast food industry, even from outside of Germany. They'd also like to see Berlin's mayor Klaus Wowereit come by next time, or maybe Angela Merkel, both of whom were invited to this year's inaugural event.

"I think they should come," Tasyumruk says. "Döner kebabs are big business and we are a part of German culture. The döner kebab as we know it today was invented in Berlin and it has strong roots here. It is a real Turkish-German product."