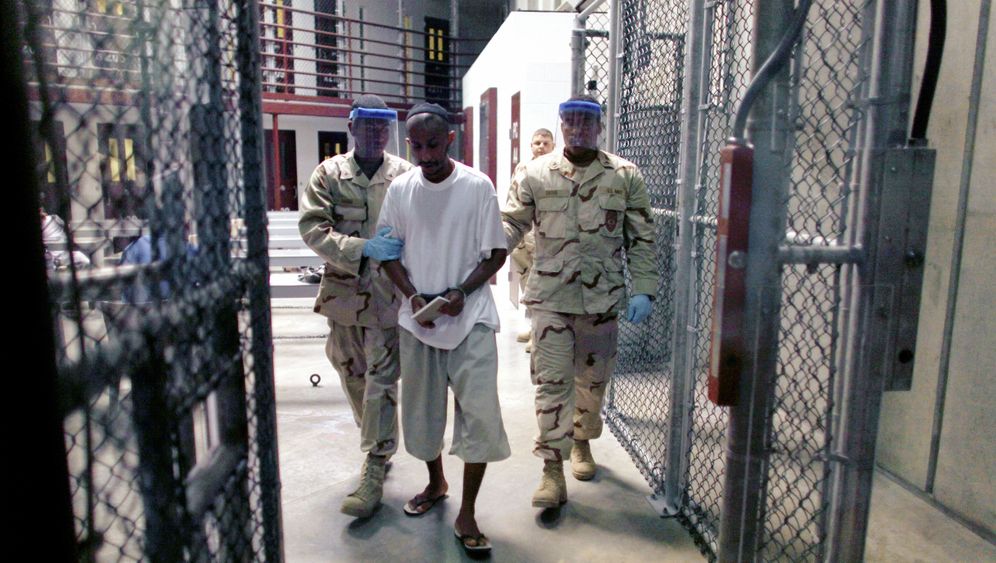 Working in a fruit and vegetable market in Kuwait was Mahmoud Salim al-Ali's last regular job. He also has experience working in the service sector and in industry, as a salesperson in the Sultan Shopping Center and with the Al-Fahad Aluminum & Glass Works.

That was his old life, before he went to Afghanistan in October 2001 to join the Taliban, was captured and later taken to the US detention camp in Guantanamo Bay, Cuba.

Al-Ali, also known as prisoner number 537, will soon travel to Germany, where some are wondering what kind of a new life he faces. Will he be able to work in a vegetable market again? Or is the former inmate Germany has agreed to accept a traumatized prisoner of war urgently in need of care and therapy?

Representatives of the German and American governments spent months in negotiations over Berlin's acceptance of Guantanamo inmates. Last Wednesday, German Interior Minister Thomas de Maizière, a member of the conservative Christian Democrats (CDU), announced that Berlin has now agreed to take two inmates: al-Ali, a 36-year-old Syrian and Ahmed Mohammed al-Shurfa, a 34-year-old Palestinian who grew up in Saudi Arabia. A third candidate was rejected. Two German states, Hamburg and Rhineland-Palatinate, will serve as hosts.

No Convincing Approach to Guantanamo

The interior minister's decision, though it marks the end of an undignified tug-of-war and sends a humanitarian signal, leaves much to be desired. For some it is not enough, while for others it is too much. The only people for whom the decision is likely to be truly satisfactory are the two inmates.

For his fellow party members, even this small gesture on the part of de Maizière goes too far. Key conservative state interior ministers, for example, were against the idea. And it hardly helps the United States in its plan to close Guantanamo, because al-Ali and al-Shurfa are only two of the roughly 180 inmates still being held at the camp.

Are the two men a security risk or are they desperately in need of assistance? Will they be welfare cases or seek vengeance? Almost nine years since the attacks of Sept. 11, 2001 and eight years since the first inmates arrived in Guantanamo, German and American politicians alike have not developed a convincing approach to addressing the problem of the Guantanamo inmates. The US military, for its part, has already had to admit that its accusations against many of the detainees were based on nothing but hearsay.

The State Department has diplomatically praised Berlin's decision as a "strong signal of Germany's commitment." But the truth is that it is still a burden for the Americans to search for new homes for their prisoners in other countries. The untiring efforts of Daniel Fried, the globetrotting US special envoy to Guantanamo, often fall on deaf ears. He has only managed to find homes for 33 inmates to date, in countries that include France, Spain, the Maldives, and now Germany.

"It is fair to say, as just an objective statement, that the US could resettle more detainees, had we been willing to take in some", Fried told the BBC. But an overwhelming majority in the US Senate was opposed to the idea.

Unnerved, the administration of President Barack Obama finally agreed to provide written guarantees, which Berlin had demanded in lengthy negotiations (and it is probably the only ally to have done so). "The United States will not release any inmates if this could jeopardize the security of the United States or our friends and allies," a joint declaration reads.

Now the Germans also have it in writing that the US government would not permit any individuals deemed a threat to the national security of the United States to "enter the country." What this means is that the inmates being released and sent to Germany are not dangerous and could even enter the United States as tourists.

This represents a delayed victory for Wolfgang Schäuble who, as interior minister in Berlin's former grand coalition government, refused to accept Guantanamo inmates because, as he noted, they would not even be given a tourist visa for the United States.

Berlin did not give the go-ahead for the acceptance of inmates until the two countries had agreed on the wording of the German-American declaration.

Everything went very quickly after that. Last Tuesday, Hamburg Mayor Ole von Beust (CDU) received a call from de Maizière. Some time ago, Beust had indicated that the city-state was in principle willing to help out with Guantanamo inmates. Now the interior minister wanted to know whether Beust was still prepared to abide by his promise. Beust said he was.

At 7:30 a.m. the next morning, a Wednesday, de Maizière called Karl Peter Bruch, the interior minister of the state of Rhineland-Palatinate and a member of the center-left Social Democratic Party (SPD). Bruch was still at home eating breakfast when his counterpart in Berlin asked him to accept an inmate. De Maizière said that it was an urgent matter, because he planned to seek cabinet approval and issue a press release that same day. It was just before the summer recess, and the interior minister was determined to avoid a renewed public debate on the issue, which could last weeks.

The state's governor gave the go-head two hours later, and on the same day de Maizière gave a press conference in which he announced the imminent arrival of two men from Guantanamo.

But why only two? There had been talk of three candidates for months. In March, a German delegation had traveled to the US detention camp in Guantanamo to interview the men. In addition to al-Ali and al-Shurfa, Mohammed Tahamuttan, 30, had also made a good impression on the Germans. The eastern German state of Brandenburg had also agreed to accept an inmate. "We were up to the task," says Rainer Speer (SPD), the state's interior minister.

In addition, the Interior Ministry task force charged with the issue had apparently concluded that accepting all three candidates was fundamentally justifiable. The fact that Tahamuttan, a stateless Palestinian, has now been rejected is probably intended primarily to send a political message at home in Germany, where de Maizière felt that he had to show the many members of his party who had opposed reaching an agreement with the United States on Guantanamo that he was not blindly obeying the Americans.

The state governments in Hamburg and Rhineland-Palatinate only received details on the former inmates they were to receive on Friday. Before then, it had not been decided which of the inmates would go to which state.

Motivated by a Fatwa

At least state officials now have a clearer picture of their future residents, who could be arriving by as early as August.

First, there is al-Ali, the former vegetable vendor. He has a wife and a 10-year-old daughter living in Syria who apparently want to come to Germany to live with him, to which the state politicians dealing with the case have no objections.

Only a few weeks after Sept. 11, 2001, al-Ali traveled from Kuwait to Afghanistan, via Syria and Iran, motivated by a fatwa, or religious edict, in which Muslims were called upon to support the Taliban.

But he never received any military training or saw any combat. After a few days in Kabul, al-Ali contracted a serious case of diarrhea, for which he was treated in a hospital. He then spent the night in the house of a doctor. By the next day, as he was fleeing from the Northern Alliance, which was fighting the Taliban, his big adventure was over. Al-Ali and his companions were captured by an Afghan warlord and robbed. The bandits took his money, his wedding ring and his watch, and he was later turned over to the Americans. However, as with almost all of the inmates in the American prison camp, there is no way to determine whether the details of his story are true.

Al-Ali has been imprisoned for the last nine years, first in Kabul and then in Guantanamo. For years, the Americans classified him as an enemy combatant, and as a threat to America and its allies. In early interrogations, he allegedly reiterated his wish to fight infidels.

Perhaps he was exaggerating or perhaps he became demoralized after years in Guantanamo. In the meantime, he apparently managed to convincingly show that he no longer wanted to have anything to do with terrorism, at least according to the assessment of German and US security officials.

"The detainee stated that prison life has changed him," a US military evaluation concludes. "He is a new person and is satisfied to live a simple, secluded life. He places his fate in Allah's hands." Besides, the report continues, the detainee had spoken "positively about modernization and the influence of the West in the Middle East. He says that this is a good thing and that it is making life easier for everyone."

The second inmate who was chosen to go to Germany reportedly made similar statements. Ahmed Mohammed al-Shurfa attended a Saudi trade school and then a university in the Gaza Strip before his brief Afghanistan adventure.

The human rights organization "Reprieve," whose attorneys represent more than 30 inmates at the US camp, even characterizes him as "one of Guantanamo's unluckiest prisoners." He was already cleared for release in 2007, but he was kept in Guantanamo because, as a stateless person, he had no country to which he could return.

Like al-Ali, al-Shurfa was responding to a fatwa against the infidels when he went to Afghanistan in the summer of 2001. US authorities were convinced that he would have been willing to carry out a suicide attack. But he too never saw armed combat, and in December 2001 he was arrested and imprisoned while trying to flee across the Pakistani border.

Al-Shurfa later told the Reprieve attorneys that he hadn't had the slightest idea what acting on the fatwa meant. He claimed that he had never even heard of al-Qaida until then.

Al-Shurfa reportedly shows clear signs of depression. He says that he wants to attend a university in Germany and start a family. He apparently has ties to the country already, after two of his cousins attended universities there.

The assistance for the two men will apparently consist primarily of psychological counseling, language courses and intensive integration assistance. The goal is to enable the former inmates to live undisturbed in Germany.

The two states plan to set up a task force at the beginning of this week to discuss where the men will live, what kind of assistance they will receive (from organizations like Caritas and the Workers' Welfare Association), and what their residency status will be. Initially, they will not be permitted to leave the region where they are housed. After an integration period, they are expected to receive an EU-wide residence permit.

The attentive Germans have even given some thought to the travel arrangements for their future charges. They will probably be flown to the Ramstein Air Base on a US military plane.

German authorities are determined to prevent the two men from receiving the same treatment as Murat Kurnaz, a Turkish-born resident of the northern city of Bremen. After his release in 2006, he arrived in Germany in chains. 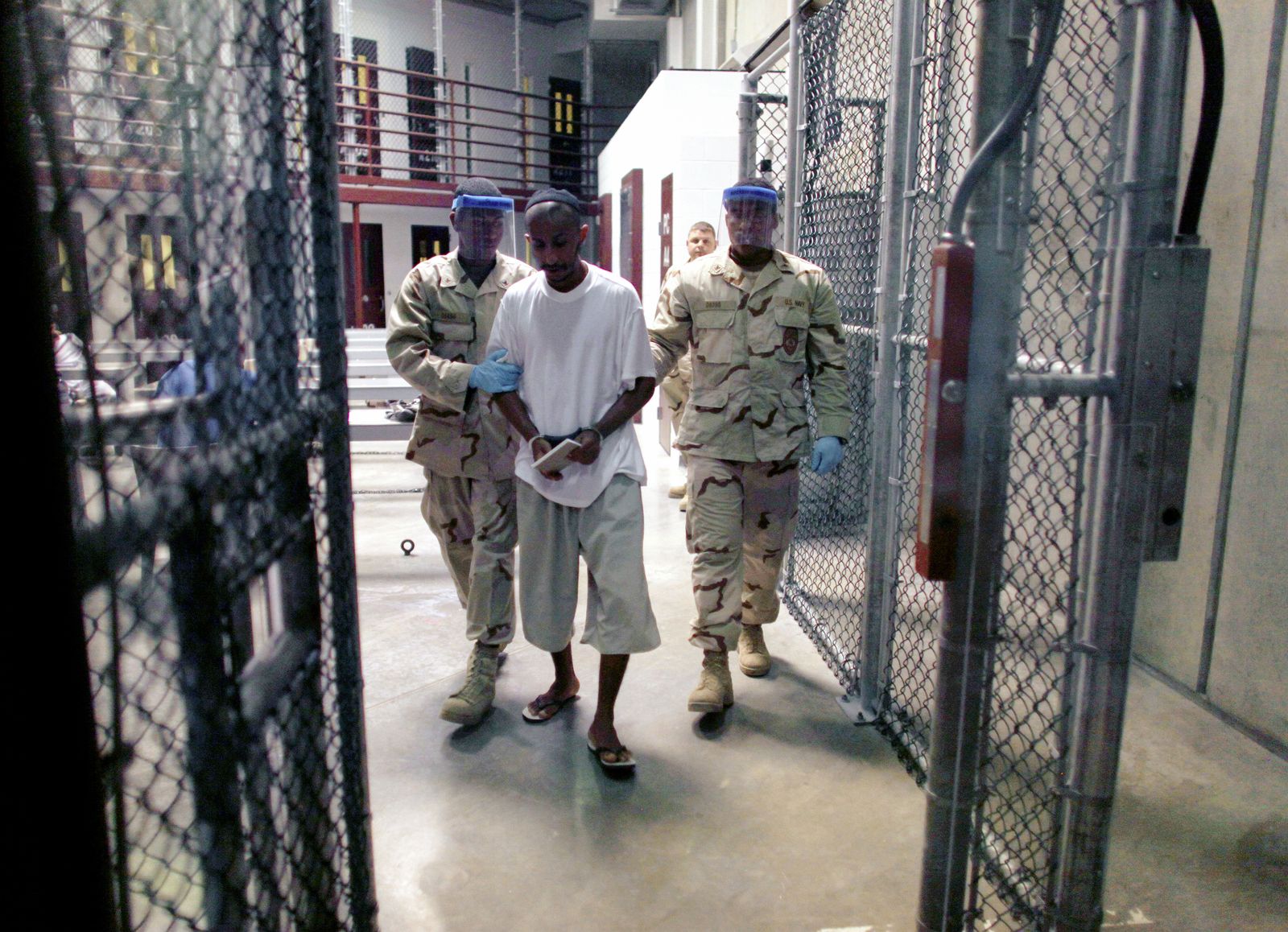 A detainee in the US detention facility at Guantanamo Bay, Cuba. President Barack Obama has vowed to close the prison but there are still 180 prisoners being held there.