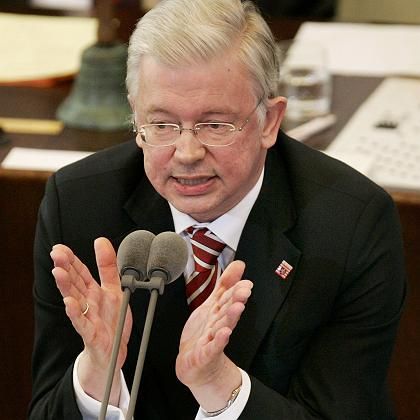 A top member of Chancellor Angela Merkel's conservatives has said Germany has too many criminal young foreigners and that immigrants must stick to the rules of Germany's "Christian-Occidental" culture, in remarks that echo the rhetoric of Germany's far right. The Social Democrats and Green Party have accused him of cheap campaign rhetoric.

Roland Koch, facing a tough re-election battle as governor of the western state of Hesse in January, told mass circulation newspaper Bild Zeitung: "How much are we prepared to take from a small proportion of violent youths, who frequently have a foreign background?"

Koch was responding to the brutal assault on a 76-year-old German man by two young men, one Greek and one Turkish, in Munich on December 20. The pensioner had asked them to stop smoking on a subway train, where smoking is prohibited.

They called him a "Shit German" and spat at him, then followed him out onto the platform and beat him up, kicking him in the head. He was taken to hospital with a fractured skull and internal bleeding in his brain but is now recovering. A number of people witnessed the attack but did not intervene.

The incident was filmed on security cameras and led to a nationwide outcry during Christmas, with calls for tougher sentencing for young offenders and the expulsion of foreign criminals. The 17-year-old Greek man and the 20-year-old Turk, who both live in Munich, have since been arrested and both have a long list of prior offences. The 20-year-old man is a Turkish citizen who was born in Munich while the Greek man immigrated to Germany six years ago.

The case has re-opened a decades-old debate about immigration in Germany, which has some 15 million people with an immigrant background, around 18 percent of the population.

The outspoken Koch has tapped into public sentiment on immigration before, winning a 1999 state election after he launched a petition against government plans to introduce dual citizenship for foreigners living in Germany.

His latest quote: "We have too many criminal young foreigners" made a banner front-page headline in the top-selling Bild on Friday. "We have spent too long showing a strange sociological understanding for groups that consciously commit violence as ethnic minorities. People who live in Germany must behave properly and refrain from using their fists. That's how one behaves in a civilized country," Koch told Bild.

He said Germany wasn't a classic country of immigration such as Canada or Australia. "In our country we don't get many cultures meeting to form a new one. Germany has had a Christian-Occidental culture for centuries. Foreigners who don't stick to our rules don't belong here."

The opposition in Hesse was quick to attack Koch's comments. The general secretary of the Social Democrats in the state, Norbert Schmitt, said Koch was engaging in campaign rhetoric. "He wants to detract from weaknesses in his own state by making big statements," Schmitt told FOCUS Online, adding that Koch's government had cut police funding.

Tarek Al-Wazir, head of the opposition Green Party in the Hesse state assembly, said Koch was "exploiting a despicable crime for cheap campaigning."

Germany's Justice Ministry rejected calls for tougher sentencing of young criminals and said the existing laws were strict enough. Critics have also pointed out that many so-called "foreign" criminals are in fact born and bred in Germany to immigrant families and therefore cannot simply be expelled.

Koch's comments echo the rhetoric of the far-right, anti-immigrant National Democratic Party which regularly rails against criminal foreigners. He made no mention in the Bild interview of the spate of assaults on immigrants and people from ethnic minorities by German neo-Nazis, especially in eastern Germany since unification in 1990.