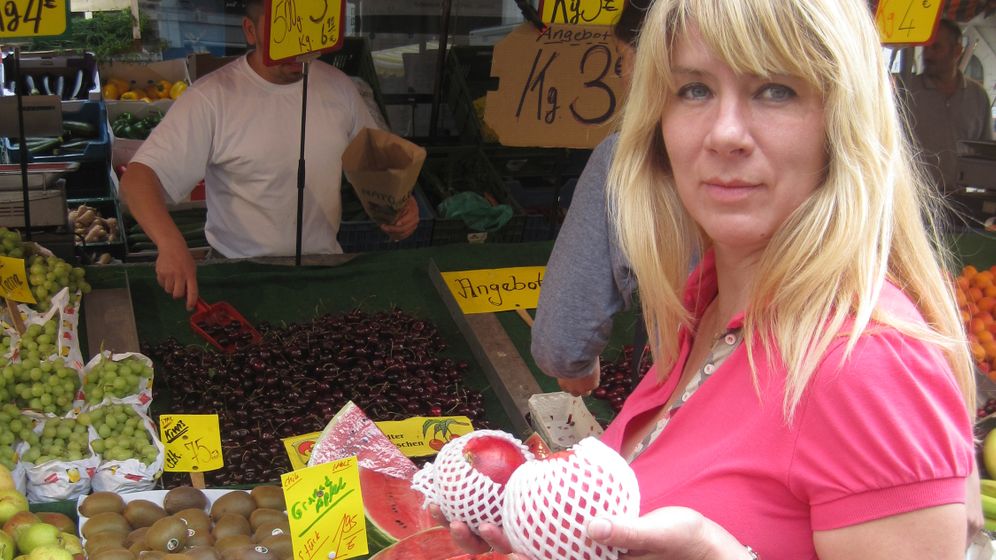 Photo Gallery: A Plea for Parallels

When Mr. Hu and his wife arrived in Germany 30 years ago, they were both in their early 20s, had no money to speak of and spoke not a word of German. All of their belongings could fit into two bags. To get started, they brought along a notebook with a few recipes and a scrap of paper with the addresses of some Chinese people who had been living in Germany for a while. Immediately after their arrival, they moved into a small attic apartment and began working -- as kitchen help in a Chinese restaurant.

Since then, not much has changed -- aside from the fact that the Hus now have their own restaurant, known for its authentic dishes, and that they now live in a roomy apartment which they own. Mr. Hu works in the kitchen, directing the labors of five cooks, while Mrs. Hu takes orders from the restaurant's guests.

The Hus have a daughter and a son, both of whom study chemistry. "We thought long and hard about which university we should send them to," says Mrs. Hu. "In the end, we decided on Aachen. There isn't a better place for chemistry." At home, the family speaks Chinese, many of their regular customers are Chinese as are most of their friends.

The Hus, in short, live in what could be described as a parallel society -- the kind of immigrant lives that many in Germany, particularly within Chancellor Angela Merkel's conservatives, would prefer didn't exist. Indeed, only recently Merkel said that multiculturalism " has failed and failed utterly."

'We Are Comfortable Here'

Such debates are uninteresting to the Hus. They have never, in fact, even been asked if they feel as though they are integrated into German society. "We are doing well," says Mrs. Hu. "We are comfortable here."

Svetlana Gerner, born in the Ukrainian capital, Kiev in 1964, came to Germany in 1992 with her three-year-old daughter Marina. Her parents -- both non-observing Jews -- followed two years later. Both Russian and Yiddish were spoken in the home. Gerner learned German "from the very first day," she says, and visited a trade school where she studied design. She graduated with high marks and soon found a job in corporate design for a large agency. Her daughter, now 21, studies at the London School of Economics while her parents, both now 71, "work day and night and only spend time with each other." Her father got an engineering degree in the Soviet Union and her mother studied economics.

Gerner, too, lives partially in a parallel society -- she is surrounded by the Russian language, eats primarily Russian food and celebrates Russian holidays. But she has no interest in going back to Kiev, nor does she try to avoid contact with Germans. On the contrary, on the recent celebration of German reunification, she worked on a Frankfurt project marking the 20th anniversary.

The Hus and Gerner have never met each other -- indeed, they don't even know about one another. Essentially, they live in parallel worlds. Still, they have something in common: the public, and the public debate, is not interested in them in the slightest. There is no "Chinese Conference" led by the German interior minister as there is for Islam and there is no special integration program for Jews from the former Soviet Union as exist for Turkish immigrants. Nobody is interested what religion the Hus practice and in what language Gerner prays, if indeed she does. It is enough that the Hus and Gerner obey the law, don't cross the street against the red light and make their contribution to Germany's gross domestic product. Everything else is a private matter and concerns nobody.

Why, then, does the term "parallel society" have such a negative connotation in Germany? Why has multiculturalism "utterly failed?" Why should people "with immigration backgrounds," as Germans so carefully say, be forced to merge into the society of the majority if they would rather remain among themselves?

Only primitive societies that allow no differences of any kind, and dictatorships, which control all aspects of life, are free of parallel societies. Both the Third Reich and communist East Germany, for example, had no such thing. In flexible, changing populations, parallel societies are almost inevitable.

And they aren't difficult to find. China Town and Little Italy in New York are just the best known examples. Not that long ago, Yorkville occupied Manhattan's East Side around 86th Street, which was called "German Broadway" at the time. Around 1900, Washington Heights at the northern tip of Manhattan was populated primarily by Irish immigrants. In the 1930s and 40s, Jews took their place before giving way to Greeks in the 60s and 70s. Now, Washington Heights is dominated by immigrants from the Caribbean -- one parallel society has followed the next. "Little Odessa" near Coney Island is exclusively Russian while in Greenpoint, one doesn't get far without knowing a bit of Polish. A subway ride through New York is a trip from one parallel society to the next.

In Israel, where the vast majority of residents have "immigration backgrounds," there used to be at least a dozen different German groups who stayed true to their culture from back home. Jews from the Rhineland celebrated Carnival, those from Bavaria had Oktoberfest and the ones from Königsberg commemorated the birthday of Immanuel Kant. Jews from Austria, Hungary and Bukovina all stayed true to their own cultures as well, as did the Poles, the Romanians and the Lithuanians.

Today, Russian Jews represent the largest parallel society in Israel, and have their own newspapers, radio stations and clubs. Indeed, there are four parallel societies in the Jerusalem Old City alone: Greek Orthodox, Muslim, Jewish and Armenian. Then there are the Samaritans in Nablus, the "Black Hebrews" in Dimona, the Bahai in Haifa, the "Jews for Jesus," and finally the leftists, who meet every Friday afternoon in Café Tamar in Tel Aviv's Sheinkin Street. Nothing but parallel societies -- and they have very little contact with one another.

Indeed, it would seem that only Germans have difficulties realizing that parallel societies are unavoidable and perhaps even desirable and useful. They give people the feeling of belonging to something that they can grasp -- provide the kind of security that society at large cannot. And they reflect society's diversity, an asset that even Germany cannot live without.