It was probably one of the most expensive beach trips in the history of the German island of Sylt: In the summer of 2006, Berthold Beitz, chairman of a the Krupp Stiftung charitable foundation went for a stroll on the North Sea island. Looking up at the cloud formations, he was reminded of pictures by Emil Nolde. Then he recalled how badly renovations were needed at the Folkwang Museum in Essen, which is home to a number of Nolde's works. Not long after that, the sky had earthly consequences: Beitz announced that the Krupp Foundation would pay for a €55 million ($76.5 million) revamp of the museum.

The plan dreamt up on that warm summer day has become reality in the bitter cold of January 2010. During its opening week, the bulk of the new building was covered in a thick layer of snow, making it look like a massive snowflake had landed. 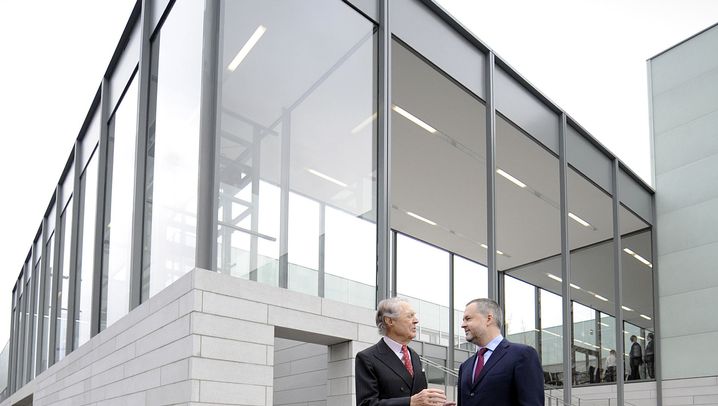 With its bright courtyards and its facade, a fusion of glass, mint green ceramic and a minimum of concrete, the construction seems weightless. In a rather unusual development

In what is a somewhat unusual development these days for a project tied to a star architect, the construction process went smoothly and swiftly. The decision to adopt the a design by architect David Chipperfield, famed for his recent renovation of the Berlin's Neues Museum, was followed by a construction period of just 23 months. Then the project was finished on time -- and remained within budget.

The traffic roars down the four-lane Bismarckstrasse near the new building's entrance. In contrast, a staircase runs alongside a courtyard with its two Gingko trees, bringing visitors to the Folkwang Museum, a space of clarity and tranquility. Chipperfield has created a structure where people can concentrate on art.

The ticket counter, with its walnut veneer, sits like a raft anchored in the middle of a huge foyer. The building opens up around it. On one side is the entrance to the 1,400 square meter exhibition hall where the inauguration was held on Thursday. Beneath its high ceilings stand installations by Simon Starling or Lothar Baumgarten and images by postwar artists Barnett Newman, Mark Rothko and Lucio Fontana.

Directly opposite are rooms belonging to the German Poster Museum, which has some 350,000 works in its graphics library and an extensive photography collection. It is opening with a series of conceptual portraits. Attention will focus on the gallery in July when the show "A Star is Born" is due to start. The exhibition shows how photographers like Ron Galella and Anton Corbijn have depicted music legends like Elvis, Jimi Hendrix and David Bowie.

Standing back at the counter in the foyer, where the photograph "Prada II" by Andreas Gursky hangs behind you, you get a glimpse of the secondary attractions of the musuem. On one side, there is Essen's first extensive art bookstore and a restaurant, adorned with a trendy mural, which is set to turn into a gourmet venue every evening.

To the south of the foyer stands the old Folkwang building, which dates from the 1960s. When work here is finished in a couple of weeks it will house the leading lights of the Folkwang collection, including Monet, Cézanne and Gauguin. Two sky-light lined tunnels connect the old building to the new.