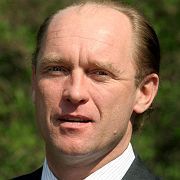 Booing and laughter broke out at a regional party meeting roll call on Sunday in Mölln, Germany, when the great-great grandson of Germany's legendary "Iron Chancellor" came up absent -- again.

Klaus Schlie, chairman and undersecretary of Germany's conservative Christian Democrats (CDU), told the Lübecker Nachrichten, a regional paper, that Bismarck hasn't taken part in regional party work for a year and a half. "Because of this," he said, "there is considerable resentment in the party over his presence in this electoral district."

In Berlin, according to Germany's mass-circulation Bild Zeitung, the aristocrat has attended fewer than half of this year's parliamentary sessions. The paper asks whether Bismarck, who was elected to the Bundestag or national parliament from the state of Schleswig-Holstein in 2005, is "Germany's Laziest Politician."

The count manages his family's estate outside Hamburg and has recently married his third wife, an American with whom he has a one-year-old son. He's rumored to have been in New York celebrating his son's birthday instead of attending Sunday's CDU meeting.

Bismarck said he was out on sick leave, after a back injury from a car accident. "Despite my back pain, for which I am undergoing intensive physical therapy," he told Bild, "I was happy to celebrate the first birthday of my son with my wife and friends. As a 46-year-old family man, my health and my son's upbringing mean a lot to me."

Even though the aristocrat hasn't been present at important votes regarding issues like a new retirement-age law and whether German Tornado jets should go to Afghanistan, according to Bild, he still receives a monthly stipend of €10,000 ($13,000) -- though he's docked a maximum of €100 for each parliamentary session missed.

His famous ancestor, Otto von Bismarck, became the first chancellor of a united Germany in 1871.