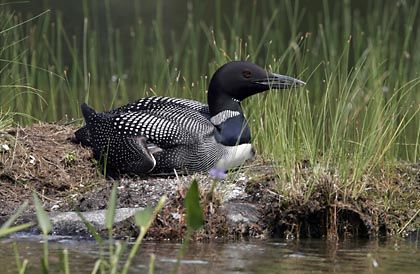 Loons like this one aren't big fans of wind turbines.

The plan is an ambitious one. By 2020, the German government would like to see 10,000 megawatts of electricity produced by offshore wind parks in the North Sea and the Baltic Sea. Indeed, construction on the first project, known as Alpha Ventus, is set to start any day now -- as soon as weather conditions allow.

But now, it looks as though the climate-friendly scheme might be in trouble. Even as wind-power can make a major contribution to limiting Germany's CO2 emissions, wind turbines in the water aren't so good for some of the local wildlife. An internal report circulating within the Federal Office of Maritime Navigation and Hydrography (BSH) comes to the conclusion that North Sea loons could be in danger.

"According to current information regarding this bird, we have a problem regarding the approval of more wind parks," Christian Dahlke, spokesman for BSH, told SPIEGEL ONLINE.

The problem is that loons are very shy and tend to give wide berth to any human activity. The 18 offshore wind farms that have already been approved are likely to permanently drive off around a thousand of the birds, according to the report. That number corresponds to 1 percent of the loon population in the North Sea, the maximum allowed according to the Ramsar Convention -- also known as the Convention on Wetlands of International Importance. The convention, which went into force in 1975, is designed to stem encroachment on valuable wetlands and governs a number of areas along the German coast, including the area were many of the offshore wind parks are to be built.

According to Dahlke, over 900 wind turbines have already been given the green light. But reaching the government target would require between 2,000 and 3,000 of the facilities, meaning that the small diving birds could stand in the way of Germany reaching its ambitious emissions reduction targets. The country hopes to cut greenhouse-gas emissions by 40 percent relative to 1990 levels by 2020. Alternative energies such as wind power are an important part of the government's strategy to reach that goal.

Still, the German government hopes that a solution can be found to the loon problem. Michael Müller, a deputy minister in Germany's Environment Ministry, said he hopes for a "pragmatic solution." Dahlke too says he thinks it is still possible to achieve Berlin's wind power targets.