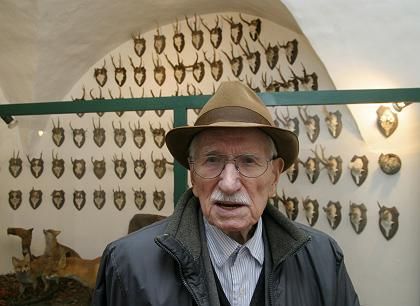 Franz Künstler, pictured here in September 2007, worked as a museum guide until his death.

One of the last veterans of World War I has died in Germany aged 107. Romanian-born Franz Künstler, who served in the Austro-Hungarian army and fought on Germany's side, died after an operation on his intestine in the southern German town of Niederstetten.

The mayor's office confirmed a report in Bunte magazine that he had died. Künstler, who was the oldest man living in Germany, was born on July 24, 1900 in Soost in what is now Romania and was drafted into the 1st Artillery Regiment of Austro-Hungarian army in February 1918, nine months before the end of the war. He fought on the Italian front.

His passing follows the death in January of Erich Kästner, believed to have been the last German World War I veteran to have fought for the German Imperial army. It is impossible to be sure because Germany keeps no official records on its veterans of World War I or World War II.

Künstler had lived in Niederstetten since 1946 and worked as a guide in the hunting museum of Schloss Haltenbergstetten castle. He is believed to have been the last World War I veteran living in Germany.

The veterans of World War I, all well over 100 years old, are dying fast, with less than 15 survivors left in the world today. Their death marks a historical milestone as the conflict that shaped the 20th century recedes out of living human memory.

There are an estimated three World War I veterans left in the United States, one in Canada, three in Britain, three in Australian, one in Turkey and two in Italy.

The last two French veterans died this year. The last one, Lazare Ponticelli, was given a state funeral in France in March.

By contrast, the death of the Kästner, the last known survivor of the German Imperial army, in a retirement home in Cologne on January 1, went largely unnoticed and elicited no response from the German government.

The Defense Ministry in Berlin, the armys Military Research Institute and the Federation of German Soldiers' Associations all said they had no information on Kästner because Germany doesnt keep archives on surviving war veterans.

Commentators abroad said the lack of any public recognition for Kästner showed Germany had not yet come to terms with its past. One British newspaper called on Chancellor Angela Merkel to issue a statement honoring him.

Künstler's death on Tuesday was more widely reported in German media than Kästner's.

But the stigma of defeat and the conflicts historical link with World War II and the Holocaust has made it impossible for Germany to officially mark the death of its last veterans, even the very last one.

Künstler still had plans for the future in March, when he told Cicero magazine: When I'm 110 the devil can come and get me."