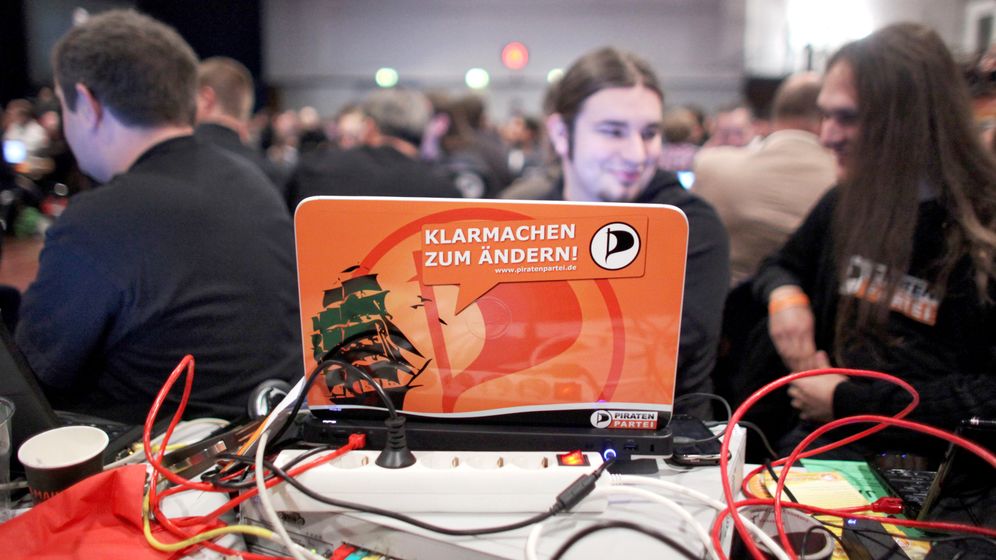 Dennis is 21 and has a chubby, boyish face. According to the information he provided on "Pirate Wiki," the "information and coordination platform" of the Pirate Party, he is 35 percent "cosmopolitan," 72 percent "secular" and 57 percent "visionary." He claims to have had his "first pirate thought" on the day he was born.

Dennis, a web designer, is sitting with other Pirates at the Hemingway Restaurant in Norderstedt on the outskirts of Hamburg, where they hold regular informal gatherings. He and his fellow party members and guests will discuss how the Pirates in the northern German state of Schleswig-Holstein intend to replace the "backroom politics" of the established parties with transparency and civic participation. When a journalist asks him what sort of pirate thoughts he had shortly after birth, he smiles and says: "That was just lighthearted nonsense, I should really change that sometime. The way it looks now, things are gradually getting serious."

Pollsters predict that the Pirate Party will capture between 5 and 7 percent of the vote in Schleswig-Holstein's state parliamentary election on May 6 (see graphic). In the western state of Saarland, the Pirates, who describe themselves as the "party of the information society," was taken by surprise by the recent collapse of the coalition of the conservative Christian Democratic Union (CDU), the business-friendly Free Democratic Party (FDP) and the Greens. With new elections set for March 25, its entry into the state parliament is seen as likely. The party is polling at around 5 percent, which is impressive for a party that didn't even have a state-level platform in early March.

What Attracts the Voters?

What attracts voters to a party that has no real organization in some places? What do they find so fascinating about political neophytes who, in the wake of their surprise success in September's parliamentary elections in the city-state of Berlin, have attracted more attention for their internal quarrels than for their actual work in parliament? Who are the voters who attach their hopes to a party, which, at its national convention, voted with a two-thirds majority in favor of legalizing all drugs and providing an unconditional basic income guarantee, in which every citizen would regularly receive money to support themselves?

These issues are unimportant to most of the 10 members, supporters and others who met at the restaurant in Norderstedt in late February. They include businesspeople, small-business owners and a social worker with her teenage son. Dennis and his fellow party member Benjamin Freiling, number 24 on the state list of candidates, are the only ones who conform to the clichéd perception of Pirate Party members as young, male and nerdy.

The rest of the participants are in the over-35 age group. Thorsten Lang, a 46-year-old businessman, has been coming to the meetings for the past three months. "A long time ago," he says, he felt "politically represented by an FDP with a social-liberal orientation." But he no longer feels any affinity for today's FDP, which has suffered a major loss of support since the 2009 national elections. He calls them "a splinter party that won't be around much longer." What attracts him to the restaurant meetings is the hope that the Pirates truly advocate civic participation. "The conditions are certainly there," he says.

Take, for example, "LiquidFeedback," the Pirate Party's Internet voting software, which can give a greater voice to the individual than other parties have done until now. Or "Mumble," a voice conference program that allows Pirates to participate in discussions with just about anyone from the comfort of their own homes -- as long as they have a computer, an Internet connection, a microphone and loudspeakers.

Claudia Beyer, who is in her late 40s, tried "Mumble" out a few days ago. She was interested in hearing what people had to say about her "pet issue," an unconditional basic income. She didn't want to say anything at first during the conference, "but then someone addressed me, and I was so taken aback that I quickly logged off. But before I could do that, I heard him calling after me and saying: Don't run away."

Beyer, with her curly hair and thinly plucked eyebrows, is no computer nerd. She learned how to use the tools that she needs to participate in Pirate discussions at one of the loosely organized training sessions the party offers in connection with its regular meetings in pubs and restaurants.

"You can ask anything, and no one gives you a funny look if you don't get it right away," says Beyer. This feeling of "being taken seriously and appreciated," Beyer raves, is also evident in the political debates. "You get the feeling that they really want you to participate, no matter how much you do or don't know about a subject," she says.

This, according to Beyer, is also the reason why the Pirates are the only party that has managed to get young people interested in politics. "We are, after all, the party of participation," says Dennis. Beyer and the other guests in the restaurant nod in agreement. It is primarily this feeling, that civic participation and grassroots democracy are more than just window dressing for the Pirate Party, which unites the people attending the Norderstedt gathering, despite any differences they may have on other issues.

The informal pub meetings are an important element in Pirate Party election campaigns. The relaxed get-togethers are a way of allowing potential supporters to get a first-hand look at the party without having to make a commitment. For the party, they're an opportunity to expand a base that is still narrow.

This is why criticism, such as that from Ralf Stegner, the leader of the center-left Social Democrats (SPD) in Schleswig-Holstein, often misses the point. Stegner had accused the Pirates of lacking a platform and having nothing to say about state political issues.

But those who vote for the Pirates are primarily voting for a different way of conducting politics. Questions about actual policies can be addressed later. Besides, the Pirates do have something to show for themselves when it comes to concrete issues, says Frank Sobolewski, a self-employed electrical contractor from Norderstedt. "The SPD people of Stegner's generation protested dozens of times against nuclear warheads, but they ended up being stationed here all the same," he says. By contrast, he says, the Pirates managed to swiftly "put the brakes" on the controversial ACTA anti-piracy law in Germany with their demonstrations.

This is precisely why the party's scramble to get up to speed in Saarland could end up being successful. "Of course we would have preferred to have had more time to prepare," says Jasmin Maurer, 22, an IT systems purchasing trainee, who is also the state chairwoman and top candidate of the Saarland Pirate Party. "But we have strong networks, and I have no doubt that we will enter the state parliament."

Maurer believes that winning "6 to 8 percent" of the vote is a possibility, and she promises a "policy of putting our cards on the table." She wants to "get people enthusiastic about democracy once again." Maurer and her overwhelmingly male colleagues in Saarland are hitting a nerve with sentiments like this. Citizens in Germany's smallest state have thoroughly lost interest in the conventional form of democracy.

In January, the state's governor Annegret Kramp-Karrenbauer, a member of Merkel's Christian Democrats, suddenly dissolved her coalition government with the Greens and the FDP. She now wants to form a so-called grand coalition with the Social Democrats, led in the state by Heiko Maas. Effectively, the only choice voters have in the upcoming election is which of the two major parties will appoint the next governor.

In Saarland, the Greens are hovering at around 4 percent and the FDP at 2 percent -- both under the 5 percent threshold needed to enter parliament. Maas has categorically ruled out an alliance with the Left Party, making a grand coalition the only real possibility. As a result, many see the election on March 25 as a farce.

Under these circumstances, it's no surprise that the Pirate Party, which only has 347 members in the state, took just three days to collect the 900 signatures it needed to enter the race. Ironically, Saarland is everything but ideal Pirate territory. The small state has an aging population and is largely rural. Urban Internet nerds are a rare species in Saarland.

But there is one issue that gives the Pirates a boost: the perception of ubiquitous corruption. That affects the image of both major parties, the SPD and CDU. Kramp-Karrenbauer's coalition government was burdened with a taint of sleaze right from the start, thanks to a generous campaign contribution from a Saarland hotelier and FDP politician to the Greens.

"Transparency is an issue for everyone in Saarland," says Michael Hilberer, a Pirate candidate for the state parliament. "The first thing I'll buy when I become a member of the state parliament is a document scanner." Hilberer promises to make both public-sector contracts and the minutes of committee meetings accessible to everyone on the Internet. The goal, he says, is not to be a protest party but to enable the base to obtain more influence.

Big Names on the Ballot

If they enter the state parliament in Kiel, the Pirates in Schleswig-Holstein also have no intention of wasting time or waging symbolic campaigns. With candidates like Patrick Breyer and the former senior Green Party politician Angelika Beer at the top of their candidate's list, the Schleswig-Holstein Pirates are in a much better position than their counterparts in the Saarland capital Saarbrücken, or even in Berlin.

Breyer is a lawyer who wrote his doctoral dissertation about the systematic recording of telecommunications data by the state, a controversial issue in Germany. In late February, the German Constitutional Court partially upheld his constitutional complaint against a law that allows the authorities to obtain customer data from telephone companies. Before that, he had successfully taken a complaint against Germany's data retention law, which allows telecommunications data to be stored and used for law-enforcement purposes, to the Constitutional Court.

"Patrick Breyer has everything it takes to be an interior minister," says Torge Schmidt, a top candidate for the Pirates in Schleswig-Holstein. When asked whether this means that his party is available to be part of a coalition government in the state, he laughs. "Yes, provided that the coalition negotiations are transmitted live on the Internet," he says. "But I can't imagine that the other parties would ever go along with that."