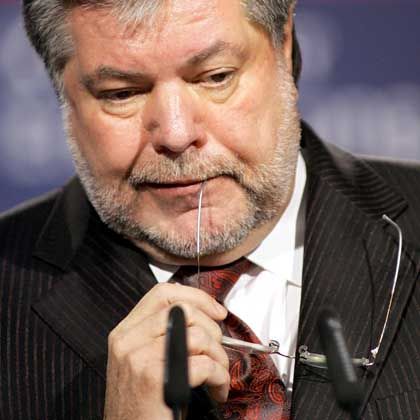 These are dark days for Germany's Social Democratic Party (SPD). The center-left party, a junior partner in Germany's grand coalition government, is struggling to define what it stands for. It is saddled with an unpopular leader and is losing voters to the newly founded Left Party. Now the SPD has failed to get its proposal for a minimum wage accepted in marathon talks with its coalition partner, German Chancellor Angela Merkel's Christian Democratic Union (CDU). No wonder its ratings are going through the floor.

According to a new poll published Wednesday, the SPD now has approval ratings of only 25 percent -- its lowest value since the general elections in September 2005. The party has lost two percentage points just since last week.

The poll, conducted by the company Forsa, also shows that the CDU has gained one percentage point and is now at 37 percent -- far ahead of its beleaguered coalition partner. This is a big change of fortunes for the SPD, which was practically neck and neck with the Christian Democrats back in 2005, winning 34.2 percent of the vote at the parliamentary elections, just one percentage point behind the combined vote for the CDU and its Bavarian sister party the CSU.

The other winner in the new poll is the Left Party, which has ratings of 12 percent, putting it ahead of both of Germany's traditional contenders for the position of third party, the liberal Free Democratic Party and the Greens, who each have 10 points. The Left Party is attracting voters from the left wing of the SPD, who are dissatisfied with the party's move to the center in recent years.

The disappointing poll results reflect increasing dissatisfaction with the SPD, who are currently at odds with the CDU over several key policy issues.

The SPD failed to get their proposal for an across-the-board hourly minimum wage of €7.50 accepted at a coalition "summit" held Monday and Tuesday. Instead, the coalition partners agreed to introduce a minimum wage for more industry sectors. Currently only the construction industry and cleaning workers enjoy a minimum wage. The actual sectors which will be affected will be decided later in talks with management and employees.

The CDU argue that a minimum wage would lead to job losses. The SPD were hoping that the proposal might help revive their flagging fortunes -- recent polls suggest that as many as 70 percent of Germans support the introduction of a minimum wage. The compromise is seen by many as a victory for the CDU.

The marathon negotiations also resulted in an agreement on raising mandatory contributions to statutory nursing care -- another controversial issue which has caused tension within the coalition. From July 2008, contributions, which are split between workers and employers, will be raised by 0.25 percent of gross wages. Unemployment insurance contributions in turn will be lowered by 0.3 percent from the beginning of 2008.

"Admittedly we did not reach our goal, but we reached a new stage," commented SPD leader Kurt Beck Tuesday after the talks. Beck, who is a potential candidate for chancellor, is very much out of favor at the moment. The new Forsa poll shows that only 16 percent of Germans would vote for him as chancellor, whereas 54 percent would choose Merkel. Even among SPD voters he is unpopular -- 40 percent of SPD voters would prefer Merkel, compared to a mere 29 percent who would opt for Beck. Beck recently shot himself in the foot with a much-criticized essay in which he attacked his coalition partner, calling them "neo-liberal."

CDU politicians expressed their satisfaction with the results of the negotiations. Merkel described the minimum wage compromise as "a very important step." The negotiations will be a boost for Merkel, who has been seen as lacking a firm hand when it comes to domestic policies, in contrast to her high-profile successes on the international stage.