After observing an extreme rise in the number of asylum seekers from Serbia and Macedonia in recent weeks, Germany's interior minister is calling for tighter rules for processing the applications.

"Those who originate from safe countries, should be provided with reduced cash benefits in the future," Interior Minister Hans-Peter Friedrich, a conservative with Bavaria's Christian Social Union party, told the daily Die Welt.

Two weeks ago, Friedrich advised Germany's federal states that they could better defend themselves against the flood of applicants by providing vouchers for food and services rather than cash benefits to the asylum seekers, many of whom are of the Roma minority.

In December 2009, members of the border-free Schengen zone, which includes most European Union member states, lifted visa requirements on a number of Balkans nations, leading to a surge in the number of people entering into the EU from countries like Serbia and Macedonia.

Friedrich is demanding expedited procedures for approving or rejecting asylum applications. He said the right of appeal in Germany's legal system would make a fast-track, 48-hour process like Switzerland's impossible, but he would still like to see decisions on asylum made in the fastest possible way. Currently in Germany, the asylum process can take months to complete, and during that time food, accommodation and financial support are given to applicants.

"The huge inflow of Serbian and Macedonian citizens must be stopped immediately," Friedrich said earlier this month. "The quicker this happens, the less right they will have to state funds. Visa-free travel must not lead to abuse of the asylum rules. This will strain the readiness of Germans to help the truly needy and persecuted."

In order to deal with the flood of new asylum applications, Friedrich has ordered 60 new workers to be assigned to processing the cases at the Federal Office for Migration and Refugees in Nuremberg. "We need to ensure that the cases are processed swiftly," the interior minister said.

Friedrich has also ordered a review into whether a visa requirement should be imposed on both countries again. "We have to review the visa waiver program for Serbia and Macedonia," he said.

In September, the number of people from the two countries applying for asylum in Germany grew dramatically, with 1,395 coming from Serbia compared to 496 the previous month and 1,040 Macedonians compared to 620 in August. Earlier this month, Germany's mass-circulation Bild reported that from Oct. 1 to Oct. 10 alone, 1,841 Serbians and 591 Macedonians applied for asylum. It is believed that most of the applicants are seeking residence in Germany for economic reasons. In recent years, the paper reported, Germany has rejected 90 percent of asylum applications from these countries.

Criticism of the influx hasn't been the exclusive realm of conservatives, either. In a recent interview with public radio station SWR, Michael Hartmann, the center-left Social Democratic Party's expert on domestic policy issues said the government must take tougher action to fight against economically motivated migration.

It's not a new problem for Germany either. A spokesperson for the agency said that spikes in asylum seekers from Serbia and Macedonia had also occurred during the past two years, but never with the numbers being seen now. Overall, Germany saw a surge in asylum applications in September of 27.7 percent relative to August, for a total of 6,691 applications.

The problem is not exclusive to Germany. A similar phenomenon is also being witnessed in Belgium, Sweden and France. At Thursday's EU meeting, the European Commission is expected to report on the effect the visa waiver program has had on the influx of people from Balkan states. The debate over whether the visa waiver should temporarily be lifted is also expected to be on the agenda.

In the run-up to the meeting, the interior ministers of German, France, Belgium, Luxembourg, Austria and the Netherlands have requested a suspension clause that would enable visa requirements to be reimposed. The proposal could be approved at Thursday's meeting.

For many of the Roma coming to Germany this autumn, the flight may have as much to do with the cold as it does economics. "Their aim is to survive the winter and come back in time for the spring," Zoran Sajikovic, a Roma member of the local council in the Serbian town of Leskovac told news agency Reuters. Leskovac noted that the €350 a Roma could get in support during the asylum process in Germany is greater than the €160 a month he earns as a school teacher.

But Roma rights groups complain that criticism of the surge in migration in Germany is driven by prejudice. "They have a right to an examination of their application, in which the racist discrimination in their home countries is fully considered," a joint statement by the German refugee rights group Pro Asyl and German Roma groups read, according to Reuters. 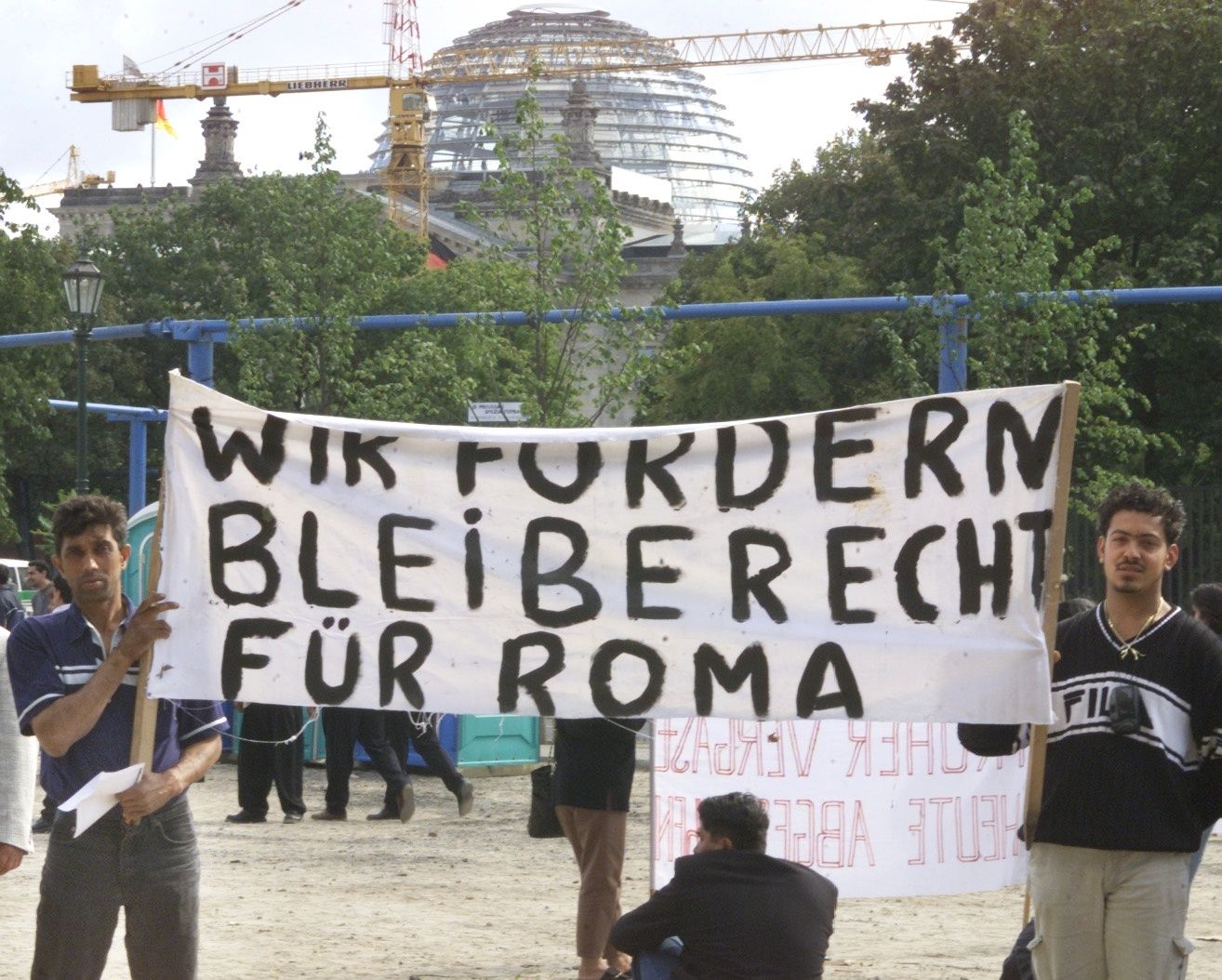 "We demand rights of residence for Roma" reads this banner held by two Roma in front of Berlin's Reichstag parliament building.