Germany's future cabinet could become the venue of a rather odd competition: Who can show the least amount of emotion, the chancellor or her deputy? Angela Merkel was born in Hamburg, a city known for its excruciating reticence. And her vice chancellor-designate, Olaf Scholz, has been the Social Democratic (SPD) mayor of Hamburg for years and has lived almost his entire life in the port city.

So far, Scholz would seem to have upper hand in ennui. On Sunday, after months of uncertainty surrounding Germany's next government, the SPD finally announced the results of its party-member vote as to whether to join yet another governing coalition with Merkel. The result was 66 percent in favor versus 34 percent opposed. But instead of relief, instead of joy, instead of enthusiasm, Scholz merely remarked: "We now have clarity." His face looked as though his hometown football team had just been relegated to the second division. "The SPD will join the next government."

To be sure, Scholz's Sunday morning disquisition was likely intentionally impassive. His party has endured extended turmoil in the wake of the September 24 election. Immediately after the first results came in last fall, then-SPD leader Martin Schulz promised not to join a coalition with Angela Merkel, a promise he was ultimately forced to jettison. As such, the party is deeply divided and party leaders at SPD headquarters on Sunday morning were at pains to avoid appearing triumphant.

Still, the subdued mood seemed strange given that the final real hurdle on the way to a governing coalition with the conservatives had been cleared. It seems fair to assume that Scholz and the rest of the SPD leadership felt extremely relieved that the party grassroots had granted their acquiescence - as did, no doubt, conservative leaders as well.

Indeed, Christian Democratic Union (CDU) party head Merkel was almost euphoric by her standards. "I am looking forward to our continuing cooperation for the good of our country," she said. Horst Seehofer, the leader of the Christian Social Union (CSU), the Bavarian sister party to Merkel's CDU, said the SPD vote presents "an excellent opportunity for the continued renewal of Germany and a new societal cohesion in our country."

Finally, more than five months after the general election last September, Germany will soon have a new government. The chancellor is set to be formally elected by German parliament on March 14, and her cabinet ministers will be sworn in that same day. Never in the country's postwar history has it been so difficult to assemble a governing coalition. Never was the helplessness of the established political parties so exposed for all to see.

The business-friendly Free Democrats (FDP), of course, took the lead in this extended dance of dithering last November, when the party abruptly pulled out of coalition talks that would have paired Merkel with the Greens and FDP. The SPD had already been settling into its role in the opposition when those talks collapsed, and the rather ruinous about-face that ensued both cost Martin Schulz his job as head of the party and blocked his path to a cabinet position. That turmoil is another reason why Scholz, future party leader Andrea Nahles, and the rest of the SPD leadership were unable to muster much enthusiasm for joining Merkel in another grand coalition.

On the other hand, though, the party faces a decision. Those in government should strive to lead with a degree of enthusiasm. The SPD had initially hoped to rejuvenate itself in the opposition, but now that it is part of Merkel's governing coalition after all, it can't have it both ways. It must now play the role of a governing party, no matter how difficult that makes it for the party to renew itself.

In the middle of this week, top representatives from the CDU, CSU and SPD are scheduled to meet to clear up the last details of their coalition agreement, a deal that is to be signed next Monday or Tuesday ahead of the parliamentary election of the chancellor. The contract is 177 pages long and represents a stable blueprint that could ultimately be quite good for Germany, Europe and the world.

But there are other details to iron out as well. In recent days, Merkel has made public her appointments to the cabinet ministries that her party will be filling. On Monday, the Munich-based daily Süddeutsche Zeitung is reporting that the CSU has now done the same, with party head Seehofer set to take over the Interior Ministry. According to the paper, CSU general secretary Andreas Scheuer will be taking the helm in the Transportation Ministry while Gerd Müller will retain his post as development minister.

The SPD, however, has thus far kept its cards close to its chest regarding the ministerial appointments it plans to make. The only sure thing is that Olaf Scholz will take over the Finance Ministry. But the party hasn't yet finalized the rest of its cabinet appointments, particularly the prestigious post of foreign minister, which incumbent Sigmar Gabriel is likely going to have to vacate. The question as to whether anyone from eastern Germany will end up with a cabinet seat has also been a topic of debate behind the scenes. More than anything, however, the SPD is likely trying to avoid the impression that its list of ministerial appointments was already finalized prior to the results of the membership vote on Sunday.

The main question, though, seems to be as to whether Merkel and Scholz will get along as well as Merkel and Gabriel did in the last government. Given their temperaments, it seems unlikely that there will be much in the way of fireworks.

But who knows? During the coalition negotiations, the two reportedly engaged in some intense squabbling. Which raises the possibility: Perhaps this allegedly boring grand coalition will hold a few surprises after all. 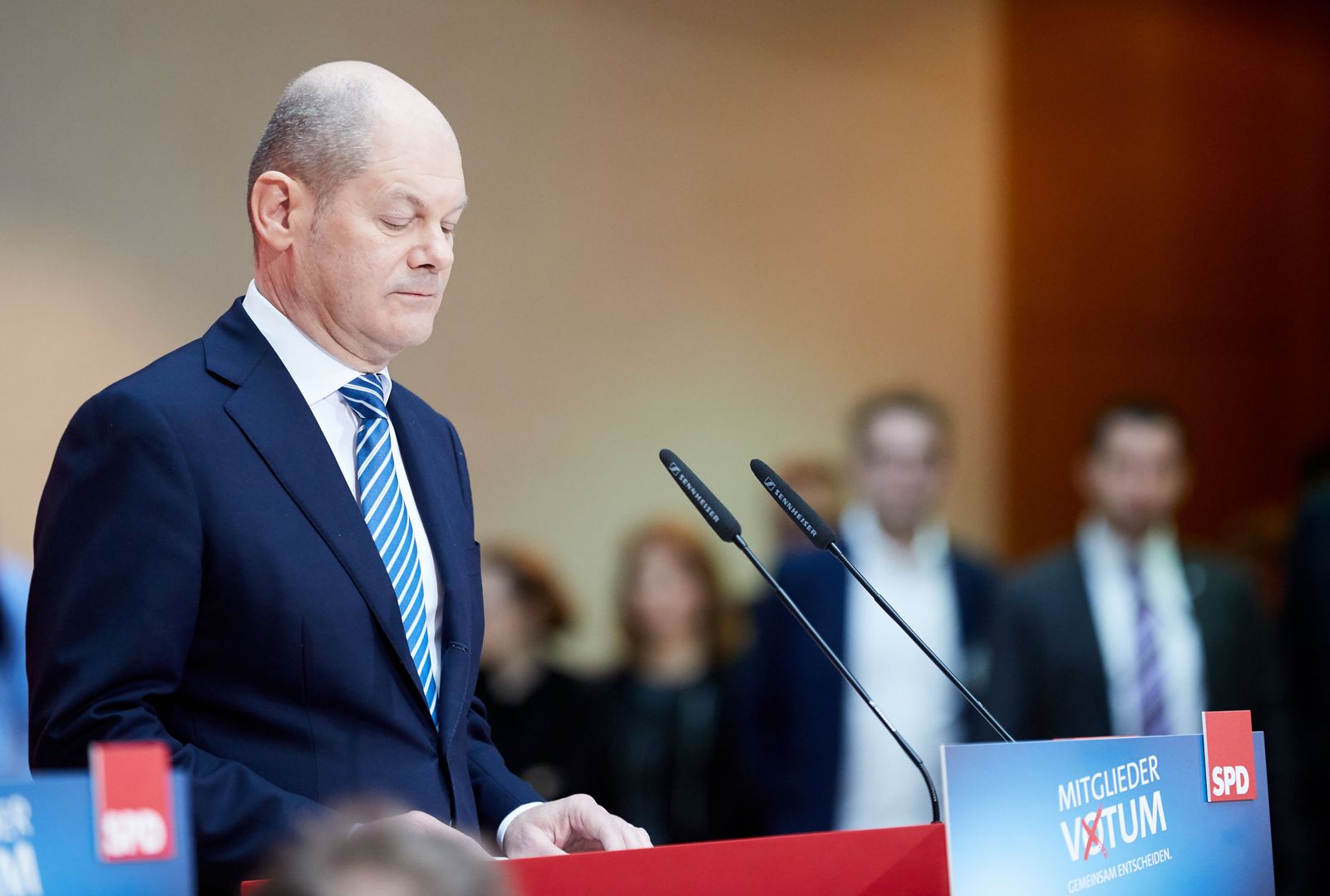 Vice Chancellor-designate Olaf Scholz announcing the results of the SPD membership vote on the new coalition with Chancellor Angela Merkel on Sunday.