Recently, German Interior Minister Thomas de Mazière spent the better part of an hour patiently answering questions from high school and college students. Most of them were about development and asylum policy, with the students voicing extreme criticism of the policy whereby economic refugees are treated differently from those trying to escape political persecution.

Finally, de Mazière had had enough. "Now I want to say something," he said, leaning forward in his leather chair and staring directly at one of the students. "We're sitting high and dry here, but try going to an area like Rosenheim (near Munich), where ... a gymnasium has to be requisitioned (as temporary housing). Try talking about refugee policies with the parents of school children there." The specter is one that has faced many German communities in recent months as the country has dealt with a fast-soaring influx of refugees.

For a moment the room fell silent. That same day, news had broken that around 500 refugees had perished in a single accident as they attempted to cross the Mediterranean. And all Germany's interior minister wanted to talk about were the gymnasiums that had been requisitioned for temporary accommodations? For some students, it was too much.

No matter how the problem is approached, though, it is clear is that the global refugee drama has arrived in Germany. In 2013, 130,000 people applied for asylum in Germany, close to one-third of all asylum applications in the European Union. This year, the number is expected to surpass the 200,000 mark, a surge reminiscent of a major wave of refugees that hit Europe in the early 1990s. Some cities don't know how to handle the influx, providing an opportunity for right-wing populists and their xenophobic sentiment.

This could have been a moment for the interior minister to shine. A veteran politician, de Maizière has a reputation for being a problem-solver, one who is efficient and doesn't get too worked up. After the party's election victory in September, de Maizière was also supposed to represent the conservative wing of Chancellor Angela Merkel's Christian Democratic Union party. After all, as interior minister "law and order" are part of his job description.

So far, de Maizière has failed to deliver. The refugee drama represents an intractable problem that he won't be able to solve, even via a policy change he is now attempting to foist onto Europe. The core of the problem, after all, is Germany's venerable asylum law, one of which the country can be proud. Nevertheless, it simply isn't compatible with the rising number of refugees.

People are fleeing their home countries for a number of different reasons these days. It might be the civil war in Syria or the Islamic State terror in Iraq. They could also be fleeing the dictatorship in Eritrea or the threats and chaos in a failed state like Somalia. They flee poverty and discrimination in Serbia despite the fact that the country is already negotiating to become an EU member state. Thousands of people who would have a credible chance of being given the right to stay in Germany are being compelled to enter the country illegally. They entrust criminal smugglers, dare to make the perilous journey across the Mediterranean or they find other ways to penetrate Europe's highly fortified borders.

Once in Germany they are confronted with Article 16 A, which stipulates that people faced with political persecution at home be granted the right to asylum. It includes no provisions for other factors that might drive people to flee their homes: hunger, droughts, crime, poverty or the lack of any prospects in a broken country. But that doesn't stop the refugees from coming and now the interior minister is being forced to come up with answers.

De Maizière says he wants to reduce the number of refugees that Germany takes in, fearing that the public mood will turn if he fails. "The priority must be given to fundamentally improving the situation in the countries of origin in order to provide improved prospects for those affected in their home countries," he says.

There are warning signs that de Maizière might be right about his country's disposition when it comes to immigration. For one, the new party Alternative for Germany (AfD), which is against the euro but also critical of immigration, has been surprisingly successful in recent state elections. But there are also lessons to be learned from the 1990s.

Shortly after Germany's 1990 reunification, the number of asylum-seekers suddenly skyrocketed, largely the product of the wars in former Yugoslavia. In 1992, some 440,000 people applied for asylum in Germany, more than twice as many as have applied this year. The development contributed to an environment of fear that enabled the right-wing extremist Republican Party to gain seats in parliament in the state of Baden-Württemberg, with more than 10 percent of the votes and for the far-right German People's Union (DVU) party to win seats in Schleswig-Holstein. In Hoyerswerda and other towns in Germany, refugees were even attacked by rabid mobs, shocking the world and bringing shame on the entire country.

The federal government at the time responded by drastically curbing the right to asylum. Refugees who had arrived from a "safe third country" were stripped of the right to asylum in Germany. Given that every single country that shares a border with Germany is considered to have that status, it means that "the only way a refugee could still apply for asylum in Germany would be to land here by parachute," criticized the refugee advocacy organization Pro Asyl.

But it is no longer possible for Germany to seal itself off as it did then. Refugees are now illegally crossing the German border in busses or on trains. They are then picked up, sometimes hundreds at a time, and taken to first admission facilities where the asylum process begins. In 2013, 130,000 people submitted asylum applications in Germany. In Italy, which is regularly in the international headlines for refugee catastrophes near Lampedusa, only 30,000 people applied during the same period.

Very few of those who apply are ultimately granted the right to asylum in Germany. This year, it was a paltry 1.6 percent. A further 20 percent, such as those from Iraq, are recognized as refugees under the rules of the Geneva Convention. A further 7 percent are permitted to remain temporarily for other reasons. In total, only about one-quarter of all asylum-seekers are allowed to stay in the country. So far in 2014, that has meant that a total of around 22,000 of the 79,000 cases processed have been allowed to remain. The rest have had to leave.

But the status quo is unacceptable, and the interior minister knows it. In envisioning policy changes, though, de Maizière only seems sure about what he doesn't want. He wants to make no changes to the fundamental right to asylum, for example. He has also ruled out any attempt to expand the legal definition to allow for "poverty refugees." "We can't solve all the world's poverty problems in our country," he says.

Two courses of action remain, one of which was taken last Friday when Berlin declared Bosnia-Herzegovina, Macedonia and Serbia to be "safe countries," meaning it will be a lot easier to reject asylum-seekers from these regions back home. Some 17 percent of all asylum-seekers in Germany come from these three countries, but fewer than 1 percent are approved.

It might appear that the rule change will drastically ease decision making on cases from those countries. But officials at the Federal Office for Migration and Refugees, the government agency responsible for processing requests, estimate that the time savings will only be 10 minutes per application. Meanwhile, the Interior Ministry of the state of Schleswig-Holstein, an internal paper warned early on that the extent to which the new rules would "lead to a reduction in the number of asylum-seekers" remained unclear.

But de Maizière is also pushing for a redistribution of refugee burdens across Europe. In order to achieve that, he would even be prepared to abandon some of the main refugee policies currently in place. He's also correct in his assessment that a considerable share of asylum-seekers come to Germany because Italy hasn't been registering refugees crossing the Mediterranean as it agreed to do. Instead, it allows thousands to make their way north without reviewing their cases. Overwhelmed by the number of refugees, the government in Rome isn't adhering to the EU's Dublin Regulation, which stipulates that all asylum applications must be processed in the European country where the refugee first set foot. So far, no action has been taken against Italy for violating the rules.

At the beginning of October, de Maizière wants to propose the establishment of refugee quotas for each EU member state. "If everyone adheres to the rules, then other countries could voluntarily help reduce the burden for a limited amount of time on countries like Italy, where a disproportionate number of refugees arrive," he said. Put more simply, this means that Italy would have to take in more than the 30,000 people that it processed last year, but nowhere near the number of people who are actually landing on its shores. The other EU member states would step in to help. It would also mean that the number of people applying for asylum in Germany would go down.

The End of the Dublin Regulation?

The precondition, de Maizière wrote in a letter to EU Home Affairs Commissioner Cecilia Malmström at the beginning of September, would be for countries like Italy to "swiftly register the people who may have the right to international protection and those who would not be eligible and for them to be quickly sent back to their country of origin or the country from which that person first traveled to Europe." Joachim Hermann, the interior minister for the state of Bavaria, supports this view, noting, "We need to have a fairer sharing of burdens in Europe if individual countries are overstrained."

This would spell, at least temporarily, the end of the Dublin Regulation. But would it solve the problem?

If the quotas are to be taken seriously, the refugees would have to be distributed across Europe -- at times even against their will. And "deportation," a bad word in Europe, would quickly be at the tip of people's tongues. One of the main hitches, though, is that many EU countries would have to show a readiness to finally accept an appreciable number of refugees. That hasn't been the case so far with 10 of the 28 member states. "It's not right that four or five countries take in the largest number of refugees," de Maizière said. "That doesn't reflect the kind of Europe-wide solidarity that we so urgently need."

During his visit with students in Berlin, the interior minister also shared a short story from one of his colleagues in the state of Saarland. In a small village in the state, refugee children had visited the village school, but one of them was carrying scabies. Within 10 days, a number of children in the village had been infected. "And now," de Maizière told the students, "try going there to stage a protest against the AfD." 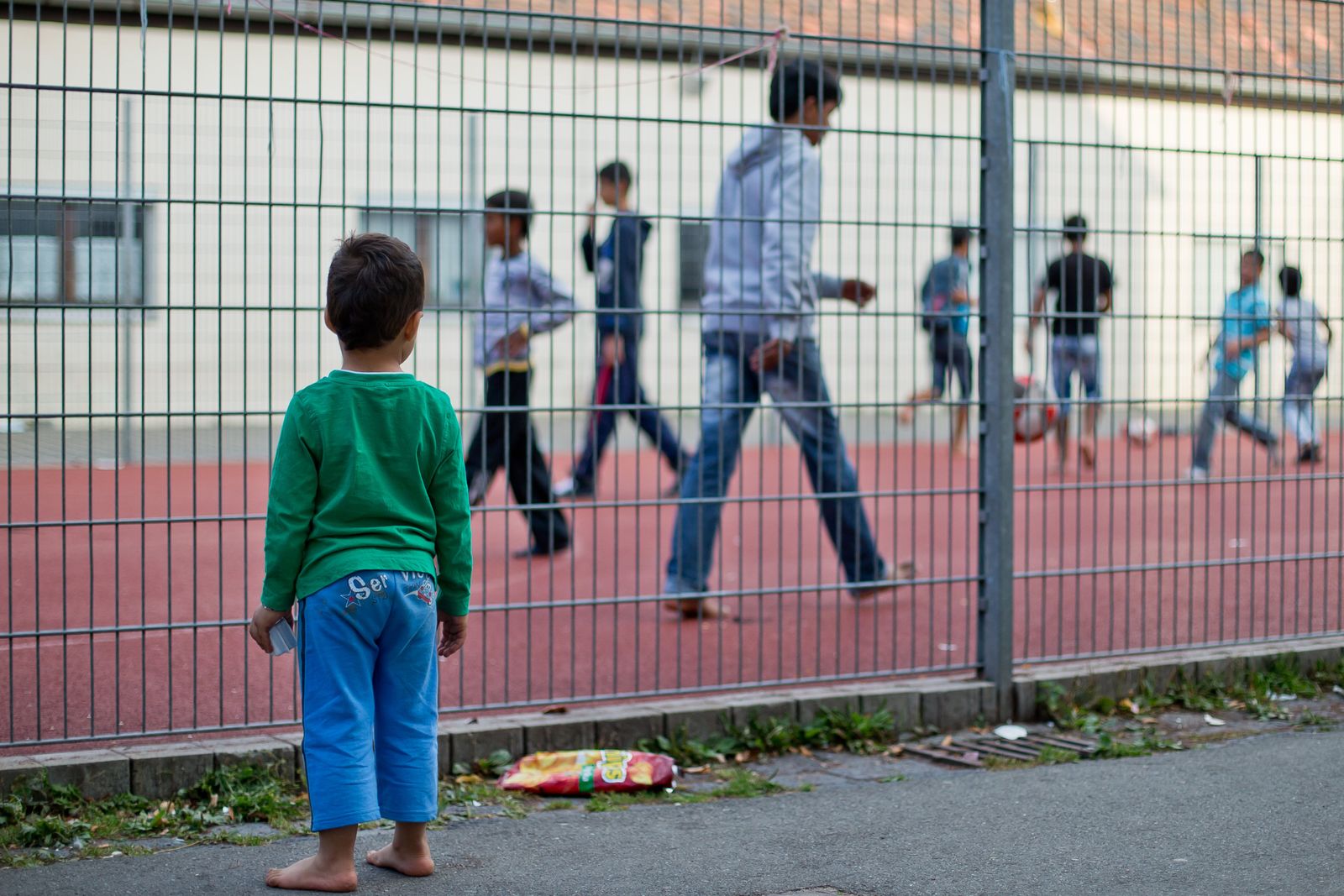 Children of asylum-seekers play football at a refugee reception center in Zirndorf, Bavaria, in this 2012 archive photo. 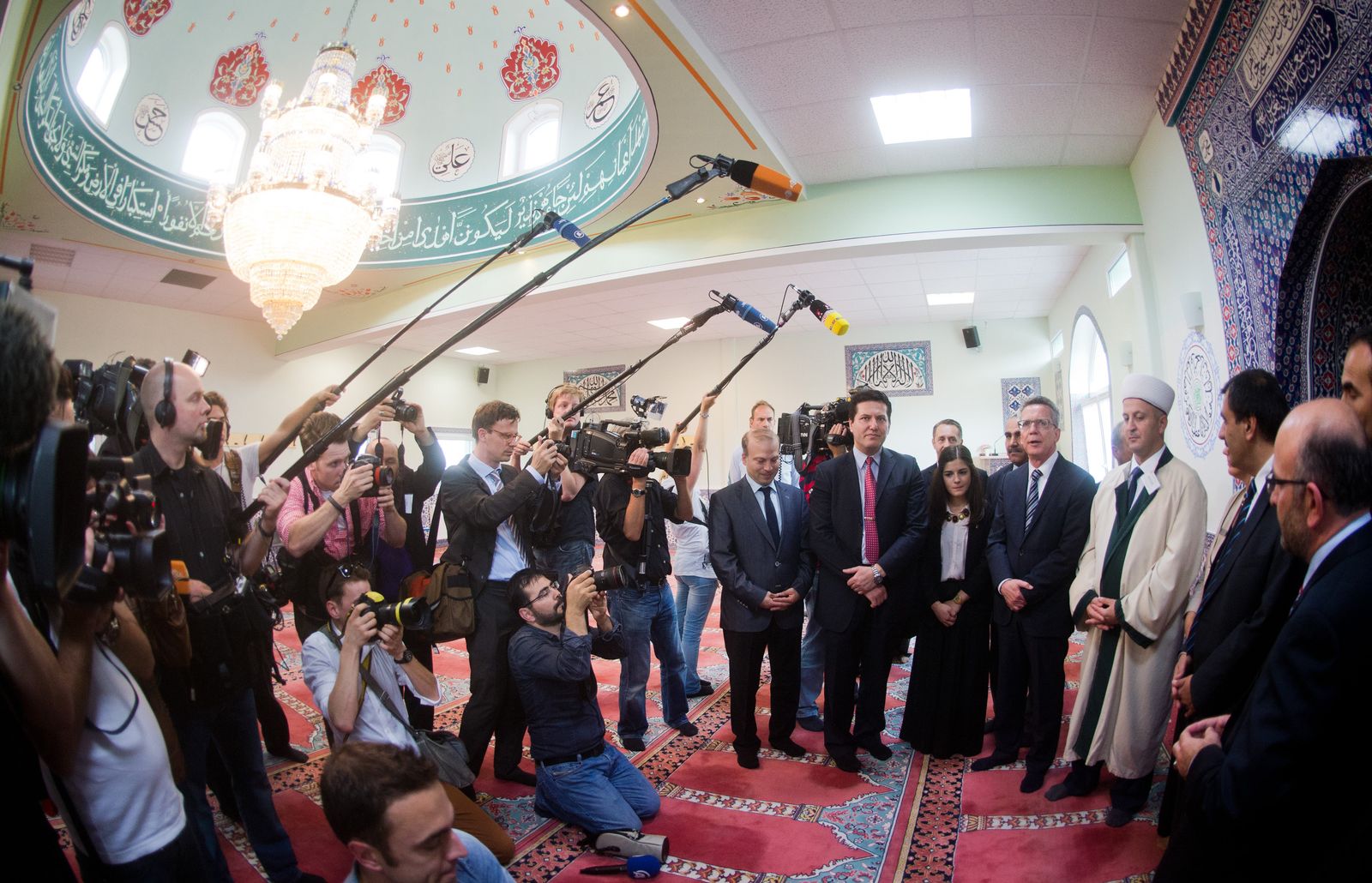 German Interior Minister Thomas de Maizière (fifth from the right) stands with religious leaders on Friday inside the Eyüp Sultan Camii Mosque in Ronnenberg near Hanover. "We can't solve all the world's poverty problems in our country," says de Maizière.