Some 3 million German soldiers died in the Soviet Union and Eastern Europe in World War II, and the fate of hundreds of thousands of them remains unknown to their relatives and descendants.

On Tuesday, May 8, the 67th anniversary of Nazi Germany's capitulation and the end of the war in Europe, the German War Graves Commission launched a campaign inviting people to consult its online database, which contains information on 4.6 million soldiers killed or missing in action.

"People are still looking for missing relatives today. But many have given up hope. Maybe they don't know that the commission can provide answers," Martin Dodenhoeft, head of communications at the organization, said in a statement. "That is why we have started a radio campaign to tell a broad audience about this possibility offered by the Internet."

The end of the Cold War over two decades ago enabled the organization to start locating grave sites, identifying bodies and re-interring them in new cemeteries across Russia and the Eastern European countries invaded by the German army.

Some 716,000 German war dead have been found and reburied since then, and that number increases by 40,000 each year, the commission said. The database processes some 20,000 searches per month.

"We're concentrating the graves. We can't preserve all of the hundred thousand sites where soldiers are buried, so we built new large ones or expanded existing ones, Fritz Kirchmeier, spokesman for the commission, told SPIEGEL ONLINE.

"We expect to scale down our activities in 2017 or 2018 because we are finding fewer bodies and it is becoming more costly to retrieve them. We're running out of money." The commission, which is largely funded by donations, hopes to find a further 250,000 bodies by then.

Soldiers were often buried hastily where they fell, or near field dressing stations and hospitals where they died of their wounds.

Most of the burial sites are unmarked, and some are mass graves, said Kirchmeier. "We have gathered a lot of records from the war and we use them to locate cemeteries. Then our staff travel there to try to pinpoint them.

"We rely on the help of local eyewitnesses, which is a further aspect putting us under time pressure because these people are of course very old and we won't be able to ask them in 10 years' time. We often come too late. Sites have often been plundered by people who searched the graves looking for items they can sell."

Sometimes, the commission's teams get a hostile reception.

"Some people are happy when the dead are taken away from their land but occasionally we still encounter massive resentment by local people," said Kirchmeier. "The memory of the occupation by the Germans and of the war crimes is still very alive."

The war claimed 20 million lives in the Soviet Union and 6 million in Poland alone. The forces of Nazi Germany laid waste to vast swaths of the land they conquered in a war of annihilation that targeted civilians from the start.

Often, the search teams can't reach the graves because roads or buildings have been constructed on top them.

Only Sites With At Least 50 Bodies Get Searched

"If the graves are on farmland, we have to deal with the owner and usually do the exhumation after the harvest," said Kirchmeier. "Then we restore everything to its original state, which makes the search even more expensive."

Since the early 1990s, the commission has restored or newly built more than 300 cemeteries from World War II and 190 from World War I in Central, Southeastern and Eastern Europe as well as Russia.

Individual graves, even sites containing dozens of soldiers, are deemed too insignificant to warrant an exhumation, said Kirchmeier.

"We only search for sites with just one or two bodies in exceptional cases when family members ask us to, but it's unproductive because the cost is very high. We usually don't try to trace any sites that contain fewer than 50 bodies -- at least not yet."

Soldiers are identified by their dogtags or with the help of original army records showing the layout of burial sites.

"If we can identify one soldier, it makes it possible to identify neighboring graves where the remains may not have dogtags -- if we have records of who was buried where," said Kirchmeier.

The commission runs a total of 824 war cemeteries in 45 countries, containing a total 2.4 million dead. It employs some 9,000 voluntary workers and has a paid staff of 582. 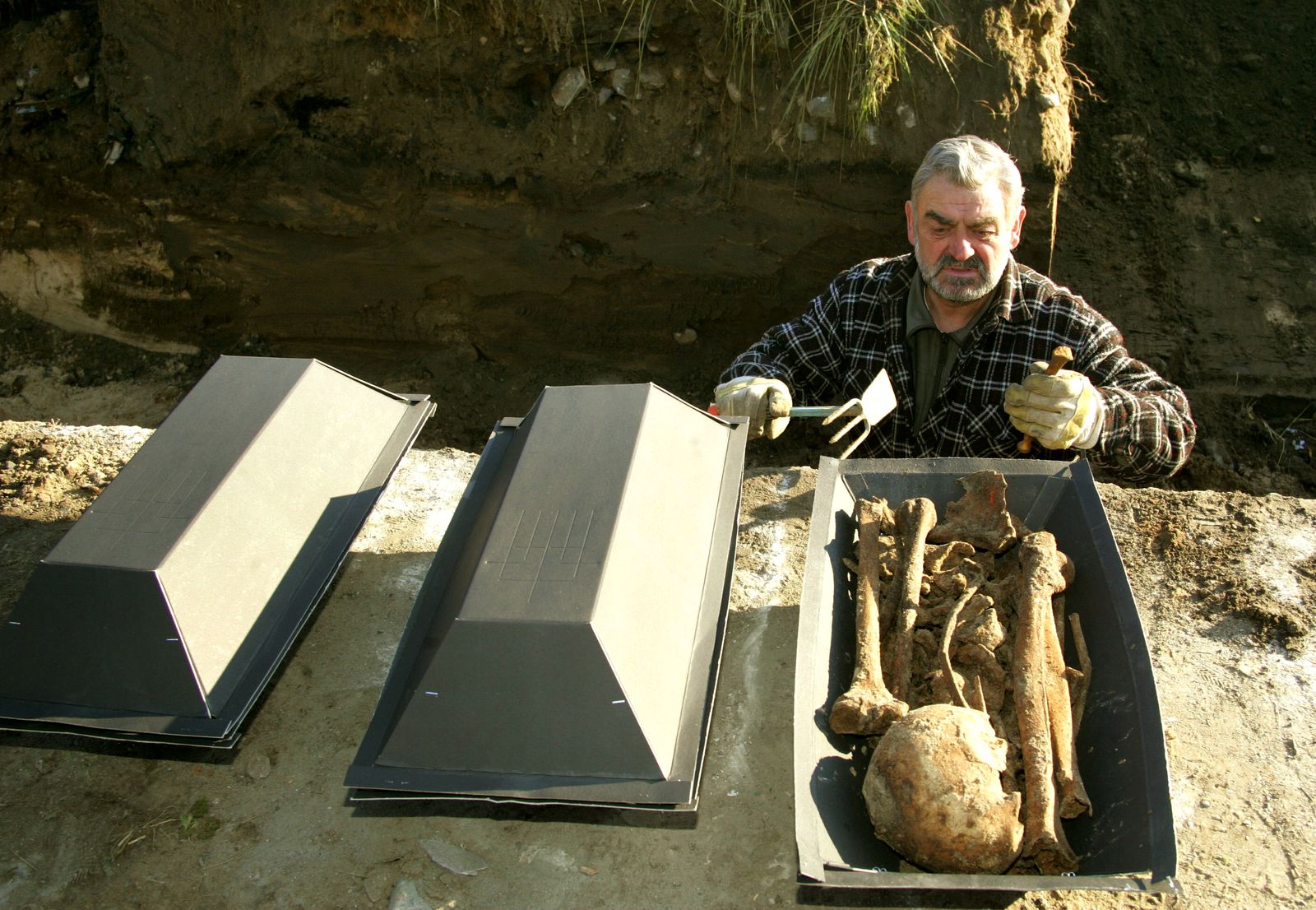 A grisly task: a specialist from the German War Graves Commission retrieving war dead from a site in eastern Germany.