The projected catastrophe would begin on the cold winter's day of Dec. 1, 2010. In the scenario envisioned by scientists, fuel elements begin melting at the Philippsburg 2 nuclear power plant in the southwestern German state of Baden-Württemberg. Engineers release pressure to prevent the plant from exploding, and for the next 25 days, radioactive clouds move north toward the Rhine Valley, over the cities of Speyer and Hockenheim, toward Mannheim and Heidelberg.

The scenario sounds like something out of best-selling German novel "Die Wolke" ("The Cloud"), but in fact it was created by specialists at the Federal Office for Radiation Protection (BfS). These specialists compiled 2010 weather data for both the Philippsburg 2 location, in southwestern Germany, and the northern Unterweser nuclear plant, which has since been decommissioned. They then combined this data with a course of events resembling the accident at Fukushima to calculate how a radioactive cloud would spread. The maps they created look like those from Japan a year ago, but the affected towns are named not Namie, Odaka or Tomioka, but Linkenheim-Hochstetten, Schwanewede and Bremerhaven.

The most worrying aspect of this study, made available to the Federal Environment Ministry last autumn, is that the country's authorities are hardly prepared for a catastrophe like that one that occurred at Fukushima. Radioactive material would contaminate far larger areas than previously assumed and entire cities would need to be evacuated -- but all of this is "not provided for in the emergency planning."

A year after the nuclear catastrophe in Japan, those in charge of managing disasters in Germany have yet to make significant changes at home. Germany's nuclear phase-out and shift in energy sources were indeed a political response to the disaster, a clearer reaction than in any other country. But specialists in the field say no one in the federal government is willing to take on the nine German reactors that will still be in operation for up to a decade, or of fuel elements that still pose a danger at the reactors that have already been shut down.

German nuclear plants, of course, are in no danger from tsunamis. But a thousand-year flood could knock out a reactor's cooling system -- a risk dismissed as just as unlikely in Germany as the danger of a massive tsunami was considered in Japan until last year.

Specialists from the Environment Ministry, the Interior Ministry, the state interior ministries and catastrophe response specialists have been meeting since autumn, but have only managed to dodge the issue. The BfS' results are available to working groups, project groups and specialists, but so far little has been achieved.

Critical voices say the Environment Ministry has kept its results secret. The ministry denies this, and counters that it has always worked in tandem with the BfS. The ministry says it now plans to reassess the "assumptions that inform the study" and will publish the study itself at a later date.

The political reaction to the problem so far has followed the view that it can't happen, so it won't. Preparations for such emergencies are only possible at enormous cost. "The events in Fukushima require that we ask ourselves seriously whether the existing allocation of responsibilities and resources in Germany is adequate for today's requirements," BfS President Wolfram König stated last year.

Every player in the matter wants to shift responsibility to someone else. The Federal Interior Ministry points to the individual states, which are technically responsible for emergency preparation. The Environment Ministry consults with the German Commission on Radiological Protection, the Society for Plant and Reactor Security (GRS) and with foreign authorities. "A conclusive evaluation as to whether emergency response planning needs to be altered cannot be undertaken until these reassessments and international consultations are concluded," the Environment Ministry wrote in a statement.

"The government's sluggishness is a scandal," says Sylvia Kotting-Uhl, the environmentalist Green Party's parliamentary spokesperson on nuclear policy issues. It's been clear for a while, she adds, that significant improvements and investments are needed in the country's worst-case scenario precautions. "The government is working at a snail's pace," she says.

The world watched in shock last March as authorities in the technologically advanced country of Japan reacted helplessly to the catastrophe. People all over the world shook their heads at the country's belief that such a serious nuclear disaster was unimaginable.

Yet an emergency preparedness brochure from the Philippsburg nuclear plant says that a serious accident is an event that "human judgment tells us cannot occur." The brochure continues to say that authorities have "prepared plans for an evacuation of the population up to a distance of between 8 and 10 kilometers (five to six miles) from the nuclear power plant's location." Those plans remain unchanged -- although it has since become clear that far larger areas would likely be affected by radiation.

Until the disaster in Japan, authorities always assumed the same accident scenario: extended lead time, then a reactor blowing radioactive material into the atmosphere for "several hours or days." In reality, the Fukushima Daiichi plant emitted radioactive material for weeks. "It's a completely new scenario," says Wolfgang Weiss, head of the United Nations Scientific Committee on the Effects of Atomic Radiation (UNSCEAR). "Much of what we thought no longer holds true."

The BfS specialists ran through emissions scenarios lasting 15, 25 and 30 days. Their simulations showed that wind direction changed often. Response plans until now envisioned evacuating only the worst affected areas around German nuclear plants. An area is divided into sectors, and if the cloud moves west, the sectors to the west are evacuated. But what happens when the wind changes?

Scientists know there is a danger that decontamination teams would have to work in the same places where the cloud moves, and conclude that emergency response measures could quickly reach their limits, since "often more than half of all sectors, and in some cases all sectors, are affected."

If an accident were to occur in Philippsburg, the cities of Karlsruhe, Heidelberg, Mannheim, Ludwigshafen and Darmstadt could all be affected by radiation. Iodine tablets would need to be distributed over a much wider area. The simulations show that people living up to 100 kilometers (60 miles) from the plant would need to stay inside their homes, but it remains unclear how long hundreds of thousands of people would be able to stay at home without provisions, and how they would later leave the area once it had been contaminated. In the worst scenario, say experts at the Interior Ministry, one million people might need to be evacuated -- and quickly.

In the area around the Philippsburg plant, buses would pick people up from designated collection points. But what would be done with the areas for which no plans exist? How would it be possible to evacuate so many hospitals and nursing homes? And where would those one million people stay? These questions remain unresolved, according to the Interior Ministry.

One very basic question hasn't been discussed at all. Germany's emergency response plans follow so-called intervention reference levels, and when these levels are exceeded, the government must take action. The International Commission on Radiological Protection (ICRP) recommends evacuation at levels between 20 and 100 millisievert per year. After the Fukushima disaster, Japan chose to apply the most cautious level, 20 millisievert, as the limit. This was criticized -- also in Germany -- as being far too high.

Critics may not have considered the fact that according to current regulations, Germans would not be evacuated until levels reached 100 millisievert per year. If Japan's more cautious criteria were applied in Germany, it would increase the number of people affected even more. 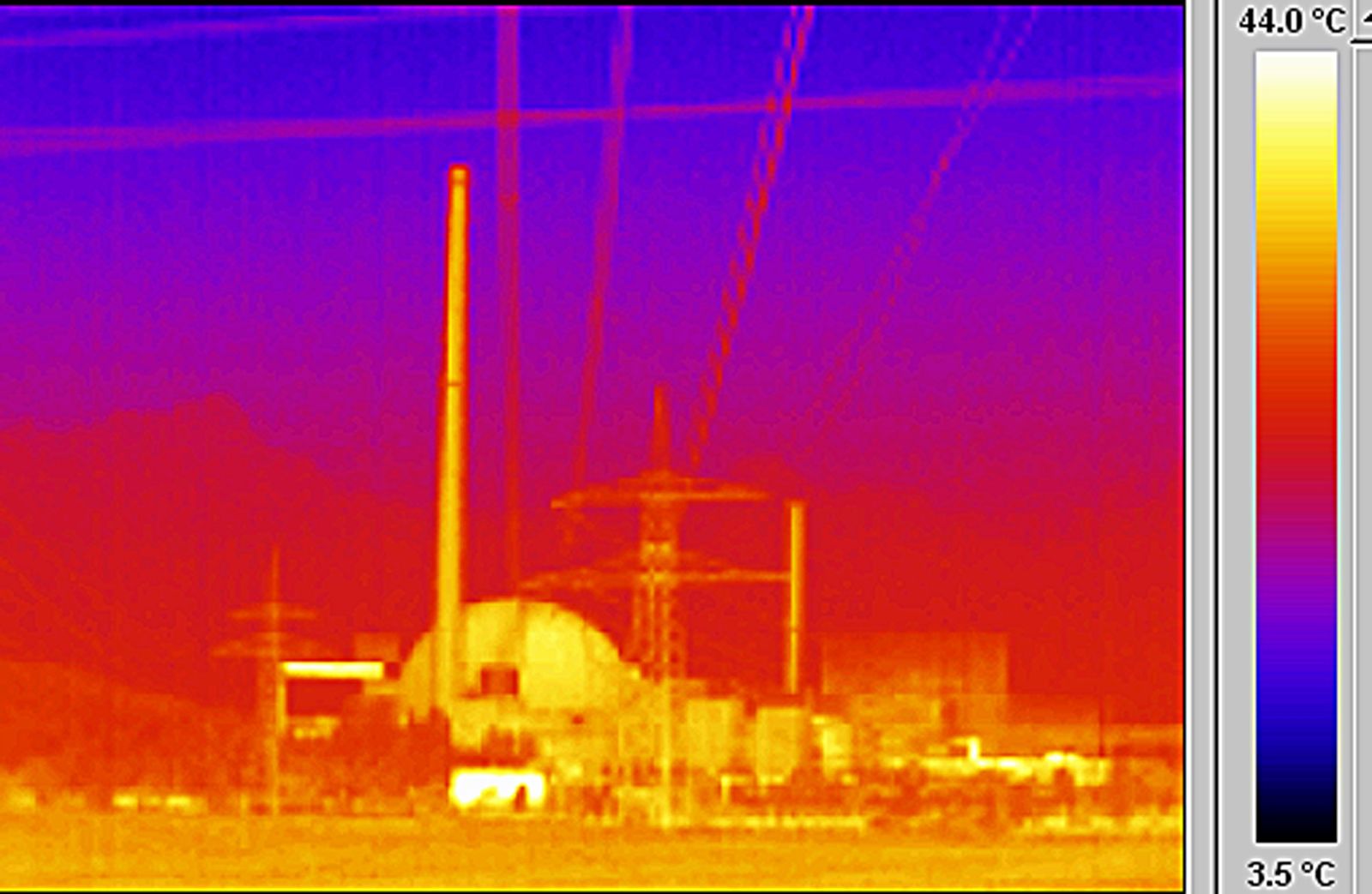 An infrared image of a reactor at Germany's Philippsburg nuclear plant.