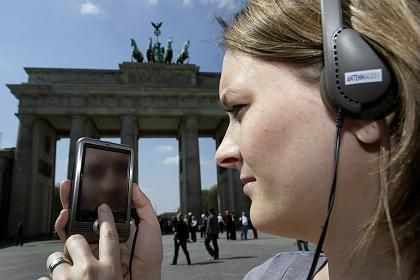 The new Mauerguide, a mini-computer equipped with GPS navigation, traces the path of the Berlin Wall and tells its history through audio and video footages that includes eyewitness testimony.

These days even Berlin taxi drivers find it hard to remember where the Wall stood. Tourists search in vain for the 103-mile Cold War barrier that symbolized repression, divided a nation and cost the lives of hundreds of people.

For visitors and for young Germans, the absence of the Berlin Wall from the rebuilt capital makes it hard to imagine what life was once like in Berlin. Watchtowers, arrests of political dissidents and shootings of people trying to flee to the West were a fact of life in the city for 28 years until the Wall's fall in 1989.

In the early 1990s, the Wall was hacked away by souvenir hunters and parts of it were sold or donated to raise money for charity. Most of it was ground down into 310,000 tons of gravel for building roads to reunite the eastern and western halves of the city. Millions of people have a piece -- real or fake -- of the Berlin Wall gathering dust in their homes. The United Nations, the CIA and the Vatican all own a piece of Wall.

The rush to tear down the hated landmark in the 1990s was understandable, but Berlin's government has realized that the city may have been overzealous in ridding itself of what remains its biggest tourist attraction. It has launched an information drive to help keep memories of the Wall alive among Germans and to raise awareness of Cold War division among younger generations who have only known a united Germany.

As part of that campaign, Berlin introduced an interactive multimedia guide on May 1 in the form of a hand-sized computer which traces the path of the Wall and provides GPS navigation to help pedestrians and cyclists find the few intact stretches of the Wall that remain.

The device, similar to those handed out in museums, uses audio and video footage to tell the story of the Wall from when it was hastily erected in August 1961 to stop an exodus of people from Soviet-held communist East Berlin. The Wall turned West Berlin, controlled by the United States, Britain and France, into an isolated enclave inside East Germany.

"Berlin realizes that it would have been better to leave more of the Wall intact in the center to help keep people aware of Germany's history, Julia von Gültlingen, whose company Antenna Audio developed the guide for the city, told SPIEGEL ONLINE.

"Many people who know this city really well, such as taxi drivers and couriers, no longer know exactly where it stood," Gültlingen said.

The so-called "Mauerguide" is available in German and English and can be hired from five points along the route of the Wall including the bustling area around the Brandenburg Gate, where the only trace of the Wall is a discreet line of cobblestones set into the ground to show where it once stood. The cost of hiring the guide ranges from €6 euros ($9) for four hours to €15 for 48 hours.

SPIEGEL ONLINE went on a tour with the guide and found it easy to use. It requires a lot of concentration, though, and visitors should dedicate at least a couple of hours to browse though the wealth of information it contains.

"We've had requests to reserve Mauerguides as far ahead as August," said Gültlingen, who reported strong demand for the device from tourists over the weekend. "So far our stock of 500 guides is enough but I think we'll need more if the weather remains good."

Users can tap the screen for information on famous escape attempts, tragic deaths and accounts from Berliners on both sides of the Wall about what everyday life was like in its shadow.

The Mauerguide tells the story of Peter Fechter, an 18-year-old bricklayer who was shot in the stomach and back by East German border guards as he climbed the Wall in August 1962. He fell back onto the eastern side and was left to bleed to death in no-mans land as he cried for help.

Fechter was one of an estimated 1,100 people killed trying to cross the Berlin Wall and the border between East and West Germany. Some 5,000 people managed to escape from East to West Germany. More than 75,000 people were imprisoned for trying to leave country without permission. The guide leads the visitor to the plaque marking the spot where Fechter died.

It also shows an interview with the late Conrad Schumann, the East German border guard who leaped to freedom over the barbed wire on August 15, 1961, two days after construction of the Wall began. The world-famous photo of his jump came to symbolize the Cold War.

"Before I jumped over the barbed wire -- it took me about half an hour to decide to go -- I went through an incredible internal struggle," Schumann is heard saying. "I smoked one cigarette after the other ... I wasnt worried about getting shot because they had orders not to shoot. Anyway they wouldnt have had the chance because it was just five meters to the barbed wire."

Berlins Mayor Klaus Wowereit said the Mauerguide was an important element of the citys campaign to heighten awareness of the Wall. We dont want to forget what happened, he said. Berlin recently marked out a bicycle tour path tracing the entire route of the Wall and has been erecting plaques and information tables at key sites.

It is also expanding a memorial site to the Wall in Bernauer Strasse, where one of the longest intact portions of the barrier is located.

Alexandra Hildebrandt, who runs a museum about the Wall at Checkpoint Charlie, told SPIEGEL ONLINE: Its incredibly important that we remember that time. We cant afford to forget the past, we have to learn from it.

From todays point of view its easy to say they shouldnt have got rid of so much of the Wall. But there was understandable euphoria when it finally came down. The horror was over. The joy was so great, it was incredible, people could be free, could go where they wanted. So of course people just wanted to get rid of everything that had obstructed that freedom.

"We're pleased that the Berlin government has started to do something -- thats progress at least."

Life in An Incarcerated City

The Mauerguide seeks to convey what everyday life was like for people in East Berlin and West Berlin in the shadow of the Wall.

One East Berlin woman recalls looking across the Wall at a viewing tower on the western side where tourists were staring at her. I couldnt understand why I couldnt be standing where they were, just a few meters away, where I could have got onto a train and gone to Paris. In that moment the whole thing seemed so absurd and unbelievable, I felt angry and powerless and two and a half years later I escaped.

Another easterner recalls: On the western side there was a viewing platform so close that you could hear the people talking. But if you stopped to listen to what they were saying a policeman would quickly appear and tell you to walk on.

One unnamed West Berliner recalls spending several summer evenings sitting on the bank of the Spree river, which formed the border between the two halves of the city in some areas. It was a strange feeling of being so near and yet so far. East Germany was just a few hundred meters away and it was still a different planet for us.

One East Berlin woman who was allocated a flat in a street divided by Wall recalls how her child would only build walls when it started to play with building blocks.

'It's a Shame There's So Little Left'

For tourists, the absence of the Wall is a disappointment.

Its a shame theres so little left but I can understand why they removed most of it. Its nothing to be proud of," Sjaak Roza, 53, a Dutch tourist, told SPIEGEL ONLINE. "You have to take trouble looking for the Wall but if you come prepared you can find it. I remember sitting watching television in 1989 when the Wall came down. Its something one will never forget."

Mira Kim, 24, a tourist from South Korea taking pictures of a lonely-looking 10-meter segment of the Wall placed amid the modern office towers in Potsdamer Platz square, said: My own country is divided so it means a lot to me to see the Berlin Wall. There should be more of it to remember.

The Mauerguide contains an interview with one East Berliner who says: "The Wall was something totally normal for me when I was a child and for a time I thought all countries were divided from each other that way to stop people just going to and fro as they pleased.

This hopeless sense that the Wall would never come down was common among millions of Germans on both sides of the border in the 1960s, 1970s and right into the late 1980s.

For younger generations, the despair must be difficult to imagine these days. And even many easterners old enough to have lived under the regime have adopted a rose-tinted view of the old communist days, even though the regime persecuted critics, spied on its citizens, encouraged them to snoop on each other and forbade them to visit the West.

This "Ostalgia" emerged partly as a result of the economic slump and job losses that hit the east after its unification with the richer west. The rapid collapse of the region's dilapidated industry left many easterners yearning for the job security and welfare benefits the communist system had provided.

Feature films such as the 2003 hit comedy drama "Goodbye Lenin" which looked back fondly at the communist era, have heightened East Germanys appeal among younger generations.

"I very much hope that the Mauerguide will help to reverse this trend," said Gültlingen. "People are all too keen to pick the raisins out of East Germanys history and the suffering of people during that time is being forgotten."

"In our guide we quote people who suffered from this regime, people who lost brothers and sons. We want to keep alive the memory of those who died trying to escape."