When Germany marked the 50th anniversary of the building of the Berlin Wall on Saturday, it was a somber occasion. Berlin held a three-minute silence at 12 noon, while German President Christian Wulff and Chancellor Angela Merkel paid tribute to the 136 people who are known to have died trying to cross the barrier. "We bow our heads in remembrance of all who died at the Wall and of the hundreds who died on the inner German border," Christian Wulff said at a ceremony held at the memorial site on Berlin's Bernauer Strasse.

But amid the somber mood, one newspaper struck a very different -- and controversial -- note. The front page of the Saturday edition of the far-left daily Junge Welt expressed the publication's thanks for the supposed achievements of communist East Germany. The newspaper, which likes to describe itself as Germany's smallest national daily, can be found in most newsstands. "We'd like to take this opportunity to say thank you," the headline reads, before listing 13 reasons why the Berlin Wall, which was built in 1961 and finally fell in 1989, was a good thing. They include "28 years of securing peace in Europe," "28 years without German soldiers taking part in wars" and "28 years of childcare provision through kindergartens." 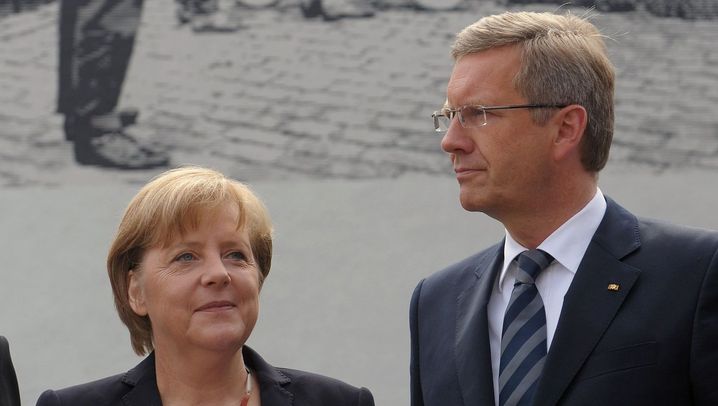 The desire to glorify the supposed good points of life under communism is perhaps unsurprising in a newspaper that has its roots in East Germany. Established in 1947 in East Berlin, Junge Welt was the official newspaper of the East German youth organization, Free German Youth, and had the biggest circulation of any East German daily newspaper. After the fall of the Berlin Wall, it was relaunched in 1994. Today, it describes itself as a Marxist publication. The Office for the Protection of the Constitution, Germany's domestic intelligence agency, which monitors political extremism, describes the newspaper as "the most important print medium in the left-wing extremist scene."

Other German newspapers were quick to express their outrage over the Junge Welt cover. "Newspaper Mocks Wall Victims," was the headline in the tabloid edition of the conservative daily Die Welt. "While Berlin was remembering the 136 people who died trying to cross the Wall, the radical left-wing newspaper Junge Welt mocked the victims," wrote the mass-circulation Bild on Monday. Both Bild and Die Welt belong to the Axel Springer media group, traditionally the bête noire of German left-wingers.

Historian Hubertus Knabe, head of a memorial to the victims of East Germany's notorious Stasi secret police located in a former Stasi prison in the Berlin district of Hohenschönhausen, called the Junge Welt front cover "really disgusting." In remarks to Bild, he called for stricter laws against playing down the crimes of the East German state. "While making the Hitler salute is a crime in Germany, there are no limits placed on glorifying East Germany," said Knabe, who is known for his outspoken criticism of attempts to sugarcoat the communist era. "Denying communist crimes is punishable by law in many countries," he added. "It should be a crime in Germany too."

Knabe's angry reaction to the Junge Welt stunt is understandable. Item 11 on the newspaper's list of things to thank communism for is the following: "28 years of Hohenschönhausen without Hubertus Knabe." 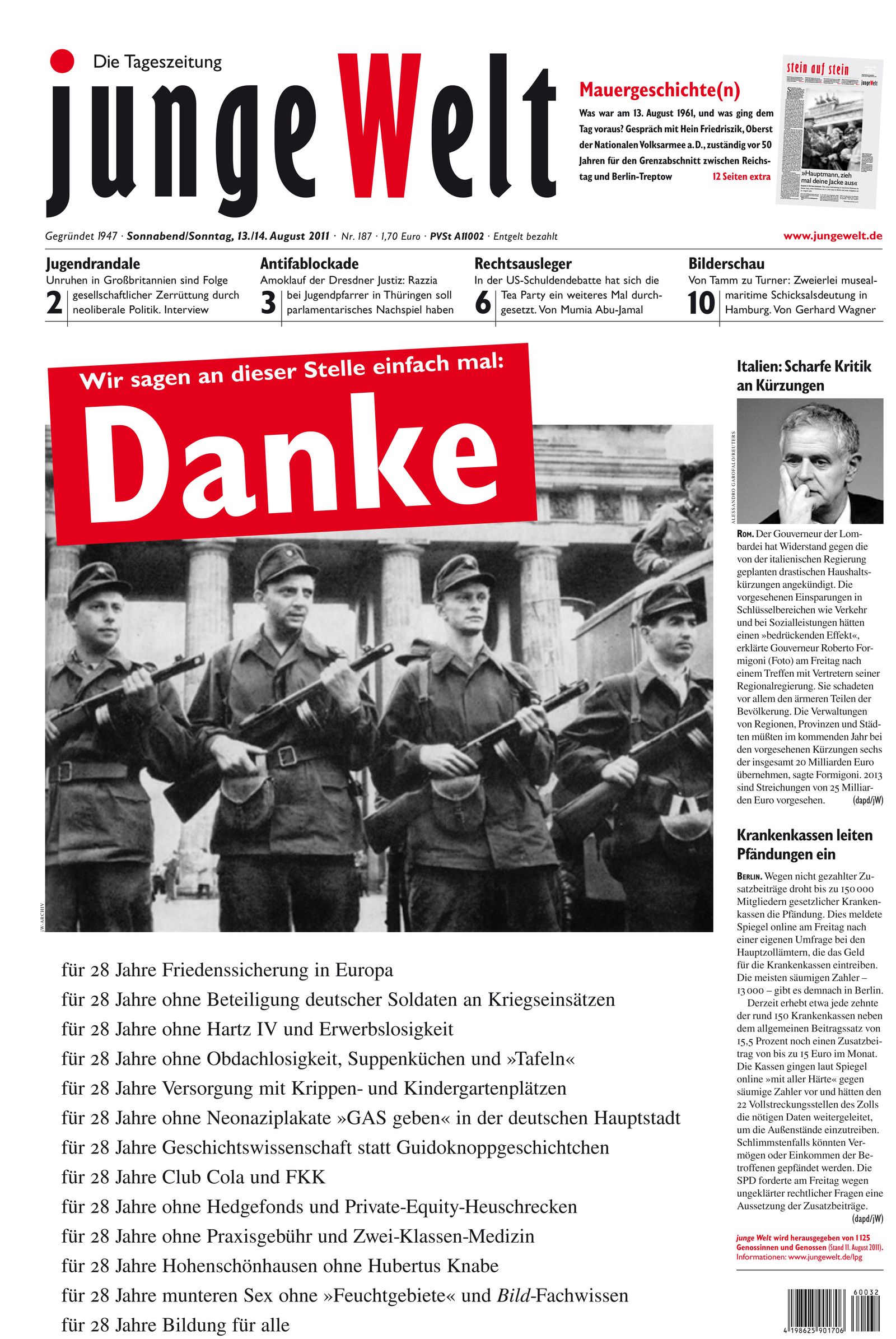 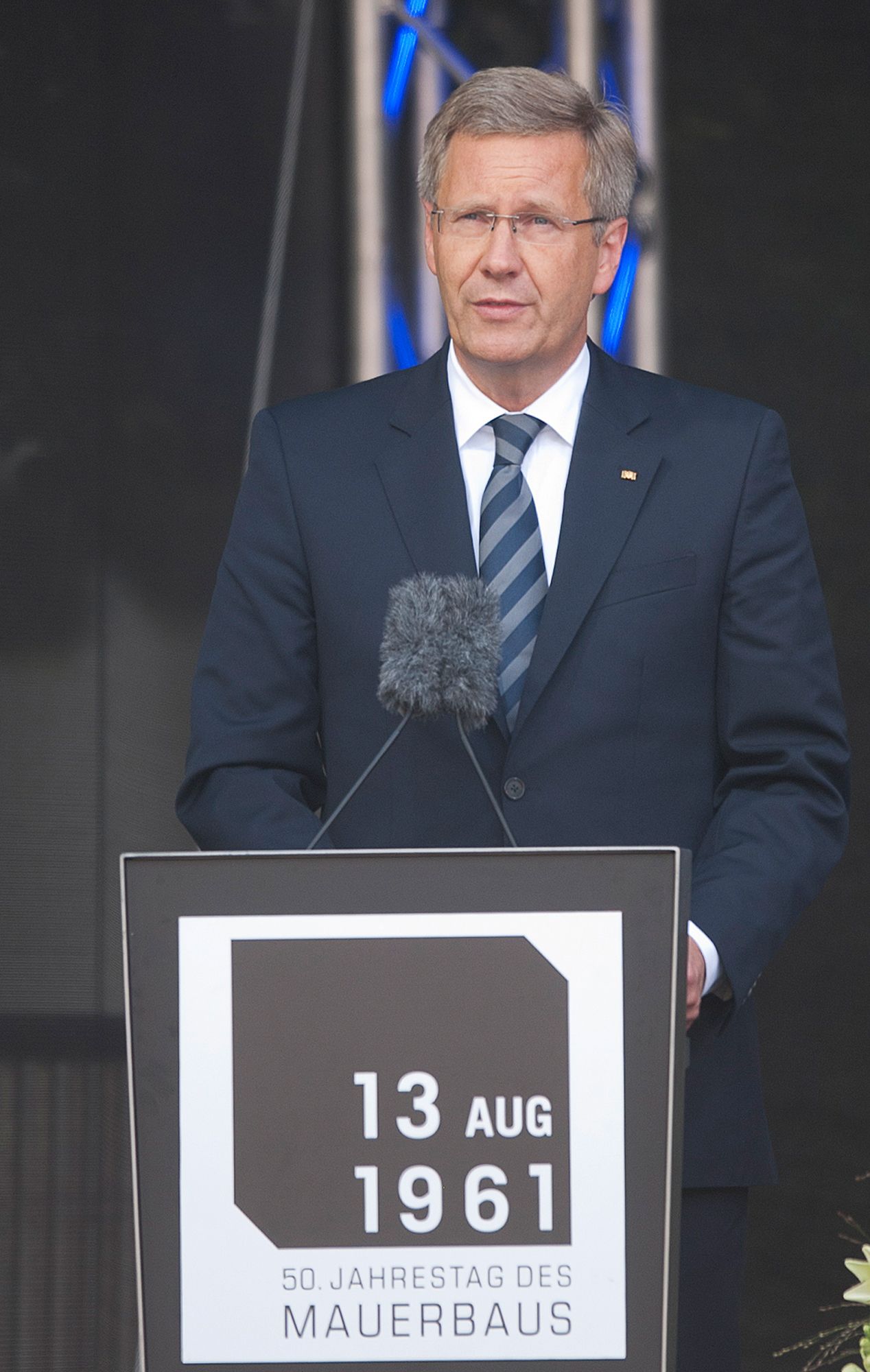 President Wulff's speech was a highlight of the day. The memory of the "life-asphyxiating wall" must serve as a reminder to appreciate and preserve the "openness of today's world," he said.