When it comes to joint bonds for the euro-zone countries, German Chancellor Angela Merkel and her finance minister, Wolfgang Schäuble, continue to contend that they steadfastly oppose the idea. Yet there are many indications that the two German politicians, both of the conservative Christian Democratic Union (CDU), do not reject the controversial idea of euro bonds quite as vehemently as they would like many people to believe. In principle, they are against them -- but only in principle, it would seem.

Merkel, for one, would have no qualms about riding roughshod over her coalition partner, the pro-business Free Democratic Party (FDP), and introducing the joint government bonds if the survival of the monetary union depended on it. Schäuble would also be willing to take the plunge if euro-zone member countries waived a considerable degree of sovereignty and subjected themselves to the rigors of a common economic and fiscal policy regime.

Euro bonds, which are backed by such prominent politicians as the president of the Euro Group, Luxembourg Prime Minister Jean-Claude Juncker, are a controversial scheme because they would have a dual impact: positive for some, negative for others. The main beneficiaries would be precisely those countries that currently have to pay high interest rates because of their precarious financial situation. The new bonds would have lower interest rates because countries with excellent credit ratings would take on part of the risk.

Consequently, countries with solid economies, like Germany, would have to pay more. Schäuble's experts have already calculated just how much of an extra burden this would be on Germany's federal budget. During the first few years, the amounts involved would be relatively manageable. In the first year, they believe that the federal budget would face extra costs of €2.5 billion ($3.6 billion). During the second year, they say, the additional expenditure would be twice as high. After 10 years, they contend that the additional borrowing costs would amount to between €20 billion and €25 billion.

As the basis for their calculations, the experts at the German Finance Ministry assume that the country would have to pay around 0.8 percentage points more in interest on euro bonds than it currently does on German government bonds. That's a fairly reasonable assumption. After all, the bonds that the European Commission is currently selling to finance its share of the euro-zone bailout fund have interest rates that are in a similar range above the German level. These bonds are collectively guaranteed by all member states.

Before they could be introduced, however, euro bonds would have to clear a number of regulatory hurdles. An initial legal analysis conducted by the Finance Ministry showed that joint government bonds would not comply with current legislative requirements.

The EU operates according to the principle of "limited transfer of sovereignty." The Lisbon Treaty concludes by listing what the European Commission and the European Council may and may not do. Issuing euro bonds does not fall into the category of approved activities.

European institutions are banned from doing what they are not explicitly allowed to do. This was also the conclusion reached by a report prepared by the research services of the German parliament, the Bundestag. The report states that euro bonds violate the Lisbon Treaty's "no-bailout" clause, which explicitly prohibits the EU or any member state from guaranteeing the debts of another EU member.

This requirement could be sidestepped in one of two ways. First, member states could circumvent the European Commission and the European Council by agreeing among themselves to issue joint government bonds. This so-called intergovernmental variant entails a drawback, though. There would be no higher institution to prevent countries with shaky finances from abusing euro bonds by using them to cheaply obtain even more money.

The other option would be to legalize the bonds. This would require an amendment to the Lisbon Treaty. Experience has shown that such measures take a long time. The Finance Ministry estimates that it would require at least two years.

Experts in the Foreign Ministry have come to a similar conclusion. They expect many years of negotiations. To make matters worse, they say that it remains uncertain whether the member states would ratify the treaty. This has prompted the Foreign Ministry to examine the extent to which the budgetary and fiscal policies of the euro-zone countries could be more closely aligned without changing the Lisbon Treaty. Their conclusion is that it would not be possible to bring them close enough together so that the bonds could be introduced.

In addition, Germany would have to clear a particularly high hurdle. Government experts say that euro bonds are on a collision course with the German constitution. They note that, according to a ruling on the Lisbon Treaty issued by the German Constitutional Court, the Bundestag may not transfer even some of its budget-related competencies to a European institution.

The only way out would be for the German population to adopt a new constitution. Article 146 of the German constitution expressly provides for such a possibility. One top official expressed his skepticism about that idea, however: "I can't imagine how we could win such a referendum." 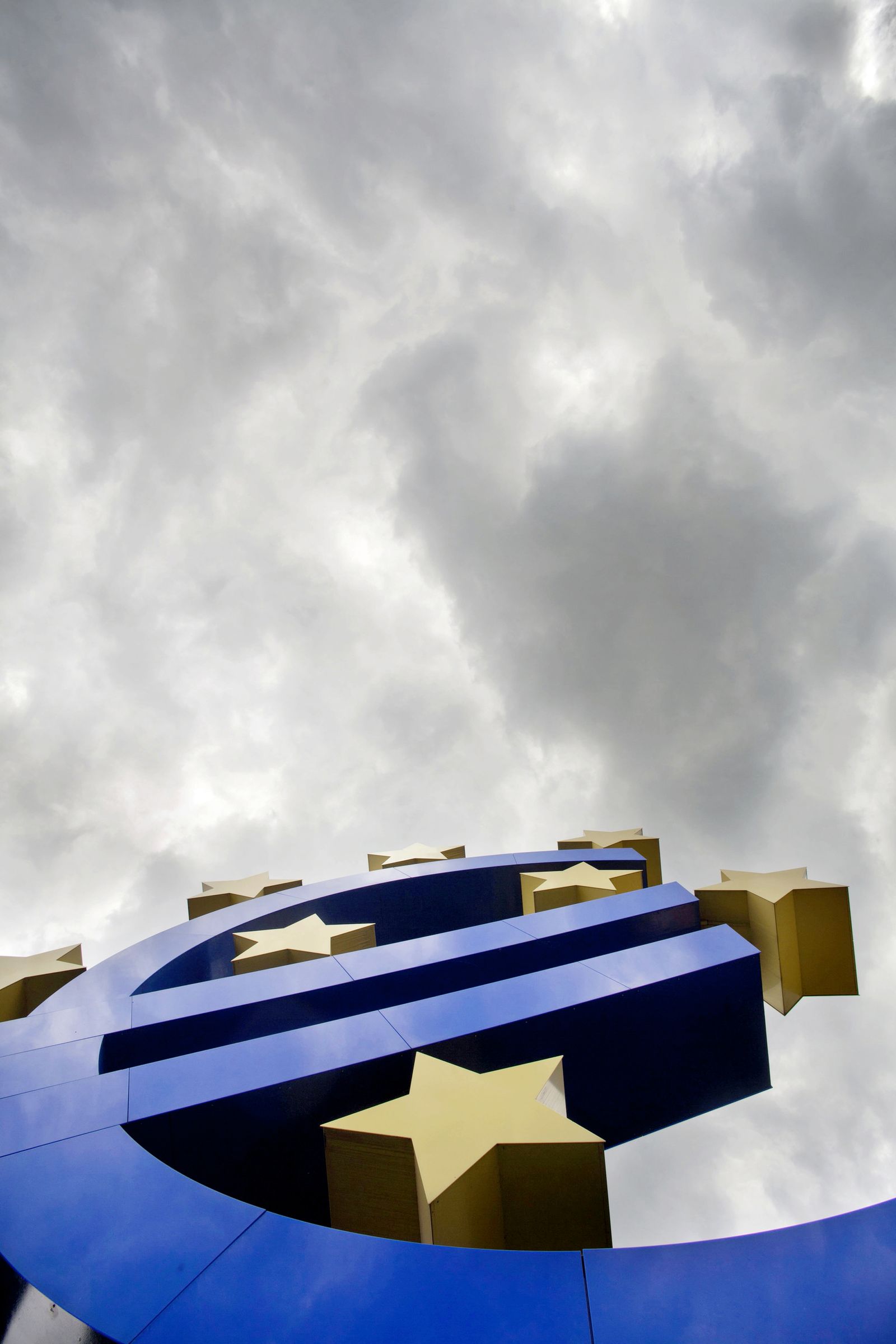 The euro sculpture in Frankfurt: Euro bonds would be difficult to introduce.