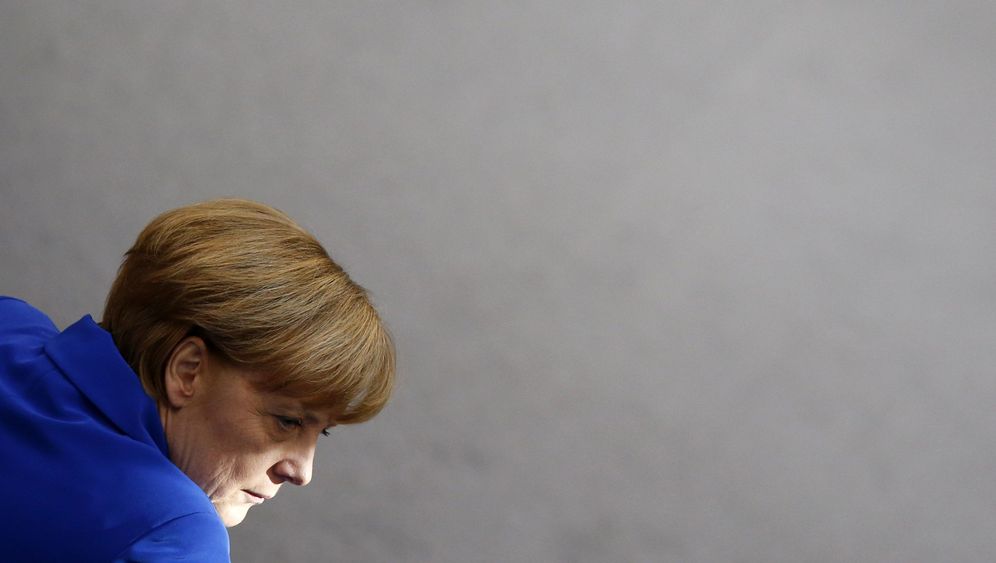 When it comes to pensions, there are two different Angela Merkels. One version of the German chancellor was on display this past spring, when she embarked on a so-called "demography tour," dedicated to discussing Germany's demographic trends. She patted children on the head at a family center and nodded sympathetically as entrepreneurs in the eastern German state of Thuringia described the problems associated with aging workforces. "Europe now has roughly 7 percent of the global population," she often told people on such occasions, "but nearly 50 percent of the world's social spending."

The other version of the chancellor was on display last Wednesday at a meeting of the conservatives' parliamentary group in Berlin. With an obvious expression of approval on her face, Merkel listened to the parliamentary floor leader of her Christian Democratic Union (CDU), Volker Kauder, defend their collective plan to significantly increase social expenditures, including the new so-called mothers' pension. Kauder sang the praises of this new policy and claimed the improved social benefits would -- in addition to guaranteeing a greater degree of fairness -- put more money in the pockets of over 9 million German mothers. He said the plan has proven to be a "booming accomplishment" in the party's mission to lead the nation on social and political issues.

But the pension reforms planned by Merkel, the CDU and their conservative sister party, the Christian Social Union (CSU) -- along with their planned new coalition partners, the Social Democrats (SPD) -- threaten to unravel not only the current pension system but the federal budget and Germany's economic future.

Reward from the Grand Coalition

By reforming the pension system, Germany's expected new "grand coalition" between the conservatives and the center-left SPD is giving thanks to its supporters. During last September's elections, 78 percent of voters aged 60 and over voted for the CDU, the CSU or the SPD. No other age group gave these parties this much support. And now, in return, the coalition is planning a wave of pension giveaways the likes of which Germany has not seen since the 1970s.

The CDU wants to give more money to all retirement-age women who have raised children. The SPD is demanding long-term employees be allowed to retire at the age of 63 without any reductions to their pension payments. And both parties intend to increase benefits for low-income earners, disabled individuals and older employees who are no longer able to work full-time. The coalition is making it clear that it sees itself first and foremost as the grand coalition of senior citizens.

These initiatives are purportedly aimed at preventing old-age poverty, but, conveniently, this money will mostly go to the more well-to-do parts of each party's base. In the case of the conservatives, this means, for example, wives in households where at least one member has a university degree and, in the case of the SPD, skilled industrial workers. If these promises were instituted in their current form, they would amount to an annual expenditure increase of well over €20 billion ($27 billion), which is more than the annual budget of the German Ministry of Education and Research.

This not only contradicts the coalition partners' pledge to plan for Germany's future, it also jeopardizes the political accomplishments of the past. The tough labor-market and pension reforms pushed through under Chancellor Gerhard Schröder (SPD), who ran the country from 1998 to 2005, created millions of jobs and helped create a financial buffer of nearly €30 billion in Germany's old-age pension funds. By contrast, the plans of Germany's new political alliance are designed to distribute the accumulated reserves as quickly as possible among the population -- a spending-spree approach to the country's finances.

Economists and social policy advisers claim the mainstream parties are using the state retirement funds to buy votes, creating more injustices than they resolve and are endangering the financial stability of the social system. According to an internal paper by the German Finance Ministry, these plans would mean Germany would no longer be able to achieve its long-term pension-contribution targets.

They also, first and foremost, threaten to upset the economic balance between young and old that constitutes the core of the German pension system. Germans between the ages of 20 and 40 already have to accept the sad fact they will receive much lower old-age allowances than their parents and grandparents. The situation will worsen in the future.

Many working households are already noticing the disparity, including Helga Lengies and her daughter. When the elder Lengies retired 24 years ago, she traveled to Alaska, China, Pakistan. Before that, she had spent much of her life in the surgery ward of the women's clinic in the Berlin district of Neukölln, where she worked half-time as a nurse, and in her 96-square-meter (1,000-square-foot) home.

Now she's 84 years old and, as far as her private finances go, can't complain. She receives €1,900 in her bank account every month, including her widow's annuity and an extra private pension. She stayed home for eight years to look after her two children, so the introduction of the mothers' pension could soon make her income grow.

But her daughter Christiane's retirement will probably be much less rosy. The 54-year-old is also a nurse and works at the Immanuel Hospital in the Berlin district of Wannsee. After the birth of her child, she took 10 months off before returning to her ward and now works three-quarters time instead of full time. Her salary, therefore, is low and, even if you take the new mothers' pension into account, she probably won't be entitled to retirement benefits of more than €1,000 per month. Her mother already gives her €200 a month to help her make ends meet.

It's an example of the real problem within the German pension system. The recent cutbacks in pensions have been particularly brutal for low earners, as well as for people who take on temporary part-time work or are unemployed for long periods. Over the last 10 years, the number of pensioners who rely on help from welfare offices has doubled to some 900,000. The number of so-called old-age poor still remains relatively small, but it will increase with the rising number of low-income earners.

But the conservatives' and SPD's pension plan is hardly the best solution to the problem. Take the mothers' pension, for example. It was designed to close a presumed gap in equality in Germany's pension system: Parents whose children were born before January 1992 only receive a single pension credit for the time spent raising a family, whereas mothers whose children were born later receive three credits. This arbitrarily established regulation is an austerity measure: It's been widely believed for the past 20 years that raising pensions for all mothers would simply be too expensive.

Even today, there isn't enough money to grant three full credits to all senior citizens with children. Consequently, the CDU and the CSU have been negotiating to grant one extra credit for each son and daughter, which would diminish this injustice, but not eliminate it. All mothers in the former West Germany would receive €28 a month per child, regardless of financial need, while mothers in the former East Germany would receive €26.

The plan also runs contrary to the most significant social reform of the last grand coalition -- the raising of the retirement to age 67 -- which was a response to the disastrous impact of changing demographics on the state pension fund. Since the duration of the average pension has nearly doubled, to over 18 years, since 1960, the retirement age was to be gradually raised until the end of the next decade. According to this concept, anyone who wanted to retire earlier would have to accept reductions to their pension payments.

Now the SPD wants to change this again for those employees who can show they paid pension contributions for more than 45 years. The new proposal would allow them to retire at age 63 without any penalties.

Many experts are appalled. Economist Axel Börsch-Supan of the Max Planck Institute for Social Law and Social Policy says that the SPD concept undermines a sensible system and introduces new inequalities: If early retirees were to receive full payments they "would enjoy preferential treatment over their colleagues who are the same age, yet remain in the workforce longer," he argues.

And where would this money come from? Business managers and trade unions have joined forces in a rare show of unanimity to argue that any additional money for parenting and rearing children should come from society as a whole -- in other words, not just from the average-income workers who already pay the lion's share of Germany's social security contributions. This would mean also extracting contributions from civil servants, self-employed professionals and high-income employees who are subject to different social security contribution regulations.

It is clear, however, that those who make social security contributions -- mostly middle-income workers -- will foot most of the bill. The mothers' pension and retirement at age 63 alone will empty government pension funds faster than social experts can say "intergenerational equity." The new coalition is already considering postponing the reduction in pension contributions -- from 18.9 percent to 18.3 percent -- which is prescribed by law to take effect next year. It's a move that would cost employees and companies some €6 billion. Kerstin Andreae, the economic spokeswoman for the Green Party's parliamentary group, calls this a "flagrant pillaging of pension funds" and a "socially unjust" burden on lower- and middle-income individuals.

But that's not all. The government's experts long ago calculated that pension contributions will have to rise over the medium term if the coalition goes ahead with its reform plans. The mothers' pension alone would "make it necessary to raise contributions after the reserves have been exhausted," according to an internal paper written by the Finance Ministry. Social security contributions would have to rise by 0.4 to 0.5 percentage points, the authors note. And since the state will also have to pump more money into the pension fund, the concept will tear new holes in Germany's federal budget. The officials in the Finance Ministry anticipate a "permanent additional burden" on the budget to the tune of €1.2 billion per year.

Not surprisingly, it is primarily the younger lawmakers in the expected coalition who are feeling increasingly uneasy about the proposals. Carsten Linnemann, 36, chairman of the CDU/CSU small- and medium-sized business association, calls it "a big step backwards in pension policy." He warns it is dangerous to simply abandon the consensus that German politicians achieved over 10 years ago.

Marco Wanderwitz, who is still chairman of the conservatives' parliamentary youth group, says he thinks some of the coalition's projects are "highly problematic." He contends that the SPD's plan to reduce the retirement age to 63 makes "all of the pension reforms of the past 20 years absurd."

Still, the rumblings of these young lawmakers are barely perceptible in Berlin political circles, even among the conservatives' parliamentary group, where similar proposals have been fiercely contested in recent years. These days, politicians like the CDU's Volker Kauder set the agenda -- spurred by a desire to score points on pension policy against the SPD. The parliamentary floor leader says he is convinced the mothers' pension made a key contribution to the conservatives' recent outstanding election result. The project has been a sweeping success, Kauder says with enthusiasm, whereas the SPD's pension plans are "only a minor achievement."