Let's imagine for a moment an aging writer of a conservative political bent mentioning the murder of Europe's Jews and the liquidation of German soldiers in the same context in an interview with an Israeli newspaper as well as mixing up the relevant numbers. Instead of discussing the 1 million German soldiers who died in Soviet POW camps, he suddenly puts the figure at 6 million, the figure more commonly given for the number of Jews murdered in the Holocaust.

One doesn't need much imagination to envision how the enlightened public would react to this writer's math. Under normal circumstances, the man's career as someone with political statements to be taken seriously would be over. But, in this case, the man behind the strange Holocaust math was none other than legendary German writer and Nobel Prize laureate Günter Grass, who made the statements in an interview published by Haaretz on Aug. 26 on the eve of the publication of the Hebrew translation of his autobiographical book "Peeling the Onion," which had been published five years ago in Germany and sparked a massive debate here because of Grass' revelations he had been a member of the Nazi Waffen-SS.

Grass' stature as a leading figure in modern world literature has clearly led him to be treated differently. Instead of finding decisive rebukes in the feature pages of German newspapers in the days since the publication of the interview, one can mostly find convoluted excuses mentioning Grass' many achievements. In fact, even the historian who returned to the subject of the Holocaust with Grass went on to defend him. "I believe that in the heat of the argument he mentioned an incorrect figure," Tom Segev said. "Actually I should have corrected him and I apologize for not having done so." That's magnanimous, to say the least.

Of course, one could let the matter go at that -- but not when one is talking about Grass, the man who strives to be viewed as the ultimate authority on issues of conscience, the man who continues to always be invoked by those in Germany who like to resort to moral judgements in their discourse with political opponents. In fact, for some time now, it seems the better Grass' reputation has gotten for being a person who can make clear statements about current events, the lower the quality of his literary output has been.

This just begs the question of why people continue to stubbornly believe that novelists have something special to contribute to political discussions.

A Lack of Political Judgment

It must have been some misunderstanding that turned writers who come up with pleasant stories into major political thinkers, into people who should give their advice on everything and anything possible -- whether it's climate change, the dark sides of globalization, world hunger or the Middle East conflict.

Indeed, no one would ever think of asking a weightlifter about the crisis in Greece just because he had worked out in Athens once, or of asking a pole-vaulter about the future of the financial markets just because she had bought a couple stocks at a certain point. One would justifiably expect their responses to be naïve, on average or inadvertently funny, at best.

When it comes to political judgment, Grass has demonstrated with amazing regularity that he doesn't have any. Over the years, he has begotten the most outrageous nonsense. But that still hasn't kept his admirers from regularly offering him a podium from which he can rage against "turbo capitalism" or the European Union policies of German Chancellor Angela Merkel.

It would be hard to forget what Grass said in a television discussion with the influential journalist and SPIEGEL founder Rudolf Augstein in 1990, the year of German reunification. Grass cited the Holocaust as a reason why Germany had to remain divided in two states, saying: "The scene of the horror rules out having a future unified state." Augstein coolly countered this by saying only: "That's not a political viewpoint; that's religion."

"He just might be the one writer who has proclaimed the most errors about German politics," said Jens Hacker, a historian who has already been cataloguing Grass' political statements for years. What's more, it goes without saying that Grass' slipups haven't stopped him for a second from having a high opinion -- indeed, the highest opinion -- of himself and his ilk. As such, he is a typical example of a species of person who has already rid oneself of the ability to deal with irony or self-doubt before getting a bit thicker around the waist.

A Failed Entry into the Political Limelight

Since 1965, when Grass intoned his "song of praise" election speech to then-Berlin mayor and future Chancellor Willy Brandt and then founded the Election Office of German Writers to help Brandt's center-left Social Democratic Party (SPD). Grass has subscribed to a belief widely held among Germany's cultural elite, one that prompts him to emerge from the dark recesses where he does his writing to make political appeals and to attest to his political "engagement."

What's more, it's obvious that his involvement isn't quite as selfless as those involved like to pretend. In the part of the memoirs of Klaus Harpprecht where he speaks about his years as a speechwriter and adviser to Chancellor Willy Brandt, one can read about how a small group of people debated whether to set up a national artists' foundation after the SPD's 1972 election victory. Doing so would create a position for Grass, who had been expecting some sort of official recognition for his efforts in support of the SPD during the election campaign. Willy Brandt was clearly rather skeptical about the idea. In the part of his records discussing the highly developed sense of self worth that Grass already had at that time, Harpprecht quotes Brandt as saying that Grass continued to be obsessed "with the illusion that he represented the electorate more directly than the party."

In a note from March 9, 1973, Harpprecht writes that Brandt "is also not completely sure that G.G. won't advance another one of his absurd ideas, like the one he floated when the Wall was being built, suggesting that all of Europe's Gypsies should be summoned to Berlin because Gypsies are generally known for making any border porous."

Not long thereafter, while Harpprecht was visiting Grass at his home in northern Germany, he noted that Grass had a "certain bitterness" about apparently not being as needed by those in government as he thought he would be. "He appeared to have expected (and to continue to expect) to be offered a concrete position," Harpprecht wrote to Brandt after speaking with Grass. "It distresses him that he sees the chancellor so little. He doesn't want to content himself with one-hour meetings every now and then."

As a general rule, writers are people with a lot of imagination who have a tremendously favorable opinion of themselves. Without these traits, they would also never be able to get through the hardship-riddled initial phase in which their success appears anything but guaranteed. That's good for art. But, as one can easily see from Grass' example, that's also disastrous when it comes to making judgments about real-world issues. 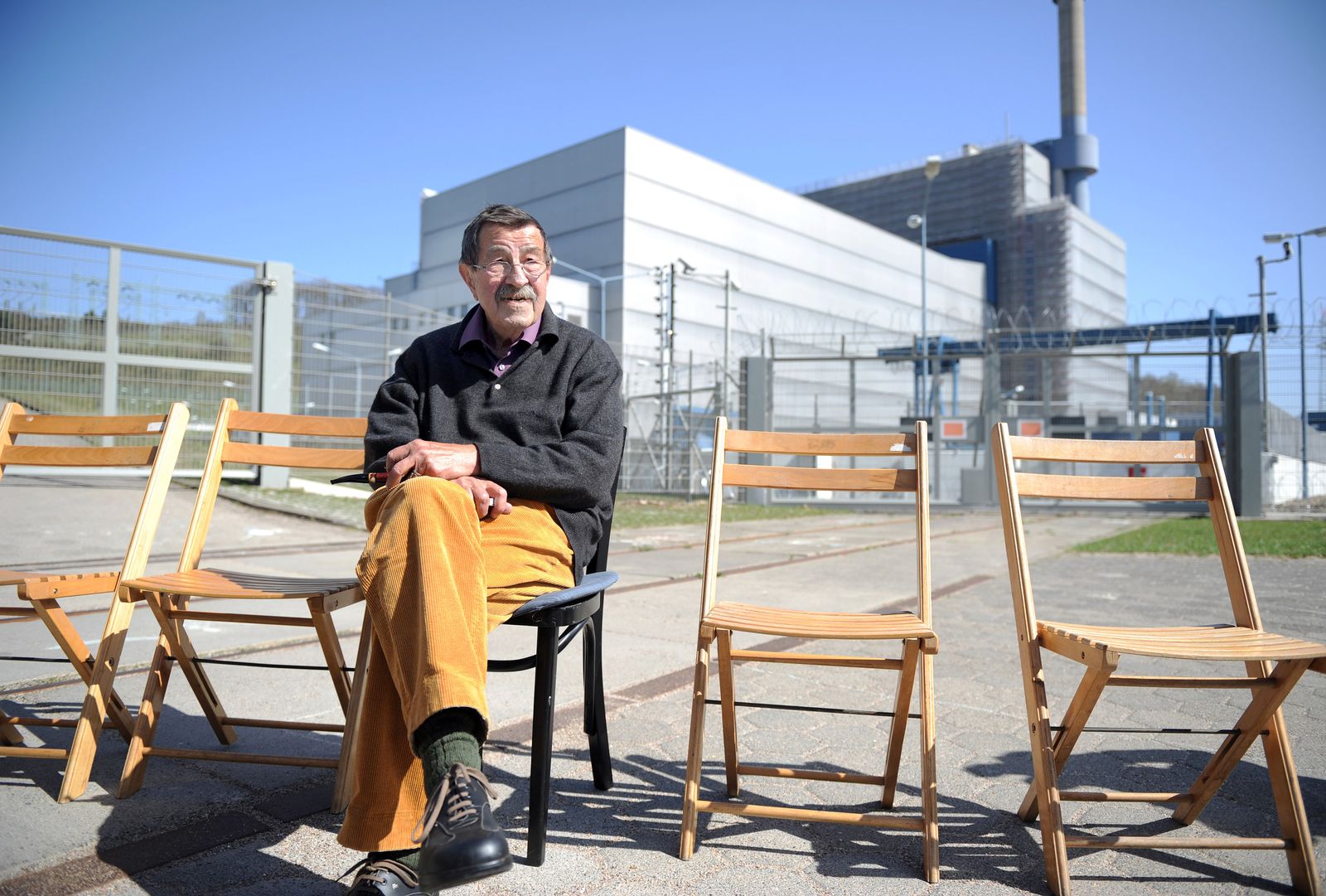 Nobel Prize-winning German author Günter Grass participates in an anti-nuclear protest in front of an atomic power plant in April.