Germany regards nuclear power as unacceptably risky and has embarked on a plan to phase it out as soon as possible. The U-turn on nuclear policy Chancellor Angela Merkel announced last month following the Fukushima accident will involve a massive expansion of renewable energies -- as rapidly as possible.

She is giving the public what it wants. But the shift will nevertheless provoke a major backlash. Germans may love their green energy, but that also have a growing proclivity towards not-in-my-backyard (NIMBY) lawsuits and referenda.

The trigger is likely to be a master energy plan the federal government is currently hammering out following the closure of seven older nuclear power plants in the wake of Fukushima. Environment Minister Röttgen and German Economics Minister Rainer Brüderle of the business-friendly Free Democratic Party (FDP) have already presented "six points for an accelerated energy turnaround." It provides a foretaste of the conflict Germany is steering towards.

To reach its goals of a nuclear-free Germany, Merkel's government now plans to dot all parts of the country with massive wind turbines as well as high-voltage power masts needed to create a modern smart grid to transport the electricity supply from the windy north to the southern part of the country. A €5-billion ($7.25 billion) special program to expand wind parks in the North and Baltic seas will be launched this autumn. Central to the program, Brüderle and Röttgen write, would be a "joint initiative by the federal government and the regional states to identify suitable locations for wind power facilities." Obstacles to planning approval such as restrictions on the height and spacing of the turbines "will be removed," the paper says.

The message is that Merkel's government won't tolerate opposition to its plans. Officials in Brüderle's ministry are drafting legislation to speed up the expansion of the renewable energy network. The paper states that the switch to renewables "won't come free of charge."

Merkel's government, once a friend to the nuclear industry, has done a 180-degree turn. And now the conservatives want to be at the forefront of the move into renewables. A study by the Fraunhofer Institute says there is suitable space for wind turbines all over Germany, not just in the northern states where many have already been built.

And in southern Germany, conservative Bavarian state Environment Minister Markus Söder wants to overtake neighboring Baden-Württemberg, which will soon be home to the country's first Green Party governor, in a race to expand renewable energies. The Bavarian politician says he wants to double the number of wind turbines in his state and to quadruple the output of wind power.

Those are the requirements of the current zeitgeist, say the green revolutionaries in Merkel's center-right coalition. They have public opinion behind them: More than 80 percent of Germans want to see the country abandon nuclear energy. But there is one major caveat: When it comes to major energy projects, most Germans do not want them in their own backyard. Just as soon as plans are unveiled for mass wind turbines near residential areas, home owners and locals are quick to organize local campaigns to halt construction.

Will Clean Energy Be a Blight to Picturesque Germany?

Many are now asking themselves if the transition to renewable energies will ruin the nation's countryside. The German Wind Energy Association (BWE) states that 21,607 high-tech wind turbines are already in place in Germany. Some fear that the zeal to install wind turbines mirrors the drive to build motorways into West German towns in the 1960s. That was regarded as ultra-modern at the time, but it created massive, irreversible eyesores.

Germany's Federal Agency for Nature Conservation is already warning that in the rush to expand renewable energies, nature and wildlife conservation is being put on the back burner. The need to get out of nuclear power seems to be overriding all other concerns.

Protest is particularly loud in the eastern German state of Brandenburg which, proportionate to the size of its population, has the largest number of wind turbines of any state in the country. In the Uckermark region, the idyllic and sparsely populated region where Merkel grew up, dozens of new wind turbines are planned. In January, citizen's groups demonstrated in front of the state parliament building in Potsdam, the regional capital, against the "mass construction of wind turbines in Brandenburg."

Resistance is also building in the eastern state of Saxony. In the town of Neustadt, even the conservative members of the city council have joined the opposition to the planned construction of wind turbines.

And even in the southern German state of Baden-Württemberg, which has the lowest percentage of wind power of any state -- at just 0.9 percent of net electricity consumption -- people seem to have protested against virtually every wind turbine installed there. Most recently, people demonstrated against wind power in Ingersheim near Stuttgart.

The Next Battleground: 'Monster Masts'

Wind power isn't the only part of Merkel's energy plan that is likely to face the wrath of local people. Opposition is also mounting against the massive power masts that will be needed to transport clean energy across Germany and Europe. The German Energy Agency estimates that 3,600 additional kilometers of the 80-meter-high (260 feet) masts will be required to fulfil the green dream.

In the eastern state of Thuringia, for example, powerful 380-kilovolt power lines are planned that will cut a route directly through the picturesque Thuringia forest region. A number of citizens' initiatives are organizing opposition to the plans. They include members of all political parties. One activist is Petra Enders, a member of the state parliament for the Left Party and also mayor of the town of Grossbreitenbach, through which the lines would run. The self-proclaimed leader of the anti-power mast movement says: "This power line is unnecessary and there are alternatives." She describes the project as a "monster line." When asked what she would propose as an alternative, she says the power lines should be buried. It is technically possible to lay the lines underground, but doing so would push up costs massively.

The NIMBY outrage over Germany's planned shift to renewable energies won't just be directed at Merkel and her conservatives. The Green Party has been home to the most vocal and ardent supporters of the withdrawal from nuclear energy. At the same time, though, the Greens are very often active in the local NIMBY protests against the very kind of projects the party backs. The Greens have been faring extremely in recent regional elections, but are starting to realize the extent of the political challenges they face.

"For us Greens, it also means that we need to clarify some of the conflict issues," the party's national governing body recently stated in a party resolution on the consequences of an expedited withdrawal from nuclear energy. "We as Greens need to demonstrate our credibility," national party co-chair Claudia Roth has said.

The party may face that test soon in Baden-Württemberg. There, governor-designate Winfried Kretschmann will be in charge of a state where wind power generation is still in its infancy. Two of the seven oldest nuclear plants shut down as part of Merkel's three-month nuclear moratorium are located in Baden-Württemberg, and are unlikely ever to go into operation again. That means the state will need to speed up its switch to other forms of electricity generation to offset the shortfall. A recent study by the Fraunhofer Institute concluded that Baden-Württemberg would be technically capable of making the switch to green energy by 2022. But at what price?

Other European countries have already tried to go even further than Germany on the path toward green energy -- and failed. Take the example of the Netherlands. The Dutch people's traditional pride in their age-old windmills doesn't seem to have carried over to modern wind turbines. Instead, opposition continues to grow, and the government's goals for wind power are looking increasingly unrealistic. As things stand now, the country won't even achieve 60 percent of the 6,000 megawatt capacity that had been planned by 2020.

The Dutch don't lack technological capacity when it comes to wind power. They simply don't want it. Residents in the village of Urk have spent years battling the installation of 93 windmills on their doorstep. Politicians there no longer have the last say in the matter. They will soon be facing off against local residents in the Netherlands' highest court. 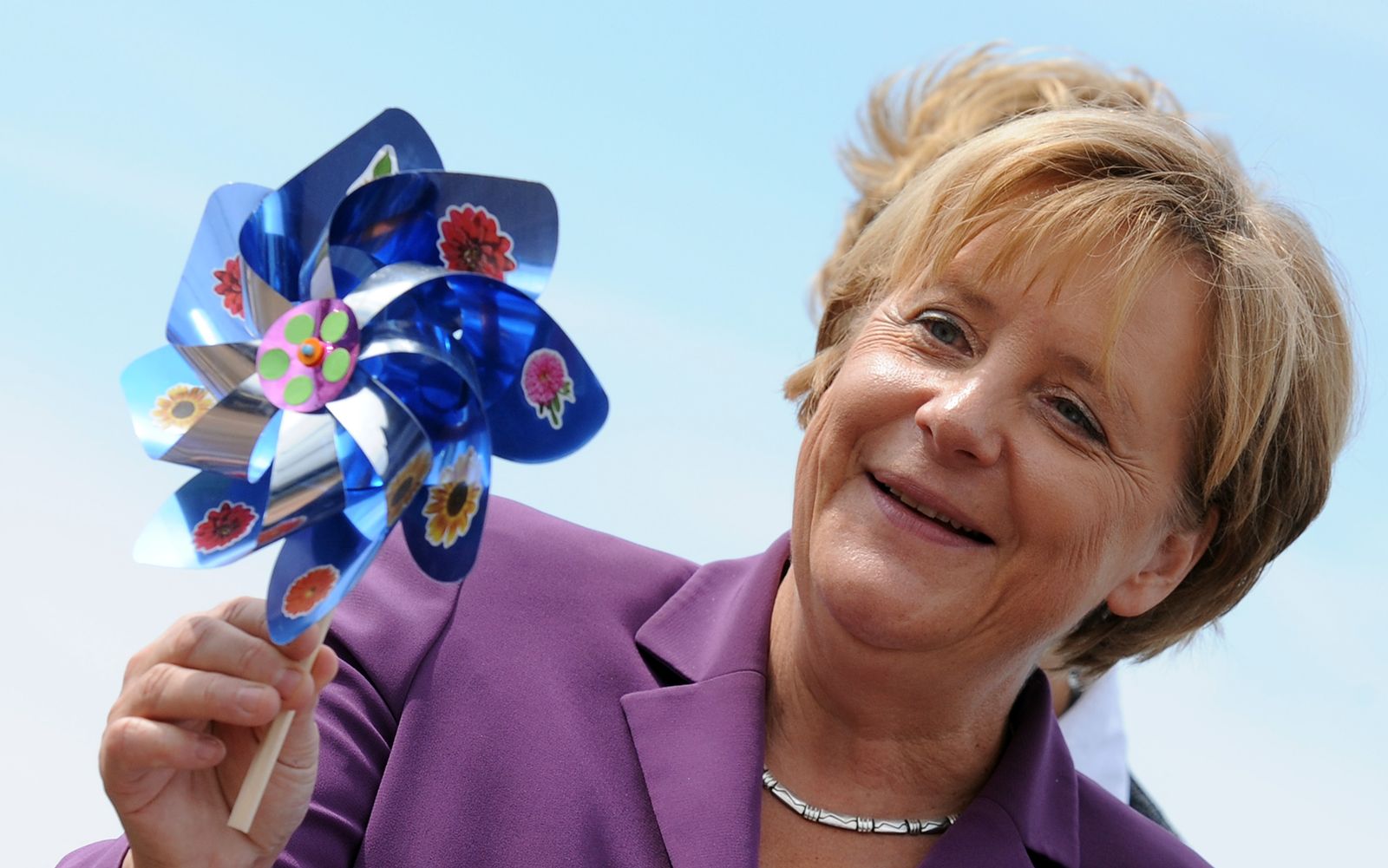 Chancellor Angela Merkel's U-turn on nuclear policy heralds a massive expansion of wind power, but many Germans are less enthusiastic about the renewable energy form.