The debate about the German government's energy policy has centered on the extension of nuclear reactor lifespans. Opposition parties, analysts and environmentalists have heaped criticism on the decision of the center-right coalition on Sunday to postpone the phase-out of the country's 17 nuclear power stations by 12 years on average beyond 2021, the date by which the last of the reactors had originally been due to close under legislation brought in by a previous center-left government in 2002.

It is true that the big power companies will profit from the lifespan extension. But the draft energy plan presented by Chancellor Angela Merkel on Monday isn't just about nuclear power. It also provides a blueprint of how Germany is to manage the transition to a new age of green energy. The nuclear reactors are only significant for one of three sectors of the energy economy -- power generation. They are irrelevant for the heating industry and transport. Besides, nuclear energy accounts for just a fifth of household energy needs -- coal-fired power generation still makes up half. Nuclear power correspondingly fills just one of the 39 pages of the energy plan. 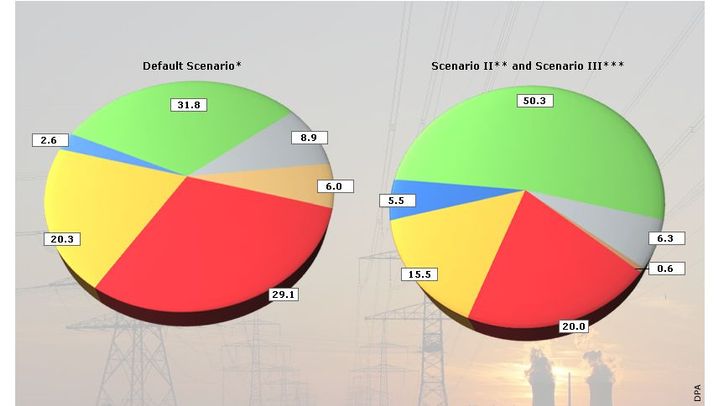 On the remaining pages the government presents ideas and concepts for gigantic wind farms in the North Sea and Baltic and for the role of biofuels in future power and heat generation. It unveils proposals for motivating people to improve the insulation of their homes and encouraging industry to become more energy efficient. It also outlines planned incentives for buying and developing electric cars and a vision of a European super grid.

Many aspects are very vaguely formulated. There are 23 instances where the government pledges to consider changing old regulations or drafting new ones. In other areas such as electric cars or smart grids the coalition has already launched development projects and the plans are therefore more concrete.

SPIEGEL ONLINE presents the main points of the coalition's draft energy plan, which lays the groundwork for a new German energy policy to be revealed later this month.

The government says Germany is already at the forefront of renewable energy generation. It now plans to step up the pace of development by increasing the pressure for cost cuts and innovations so that Germany's green energy sector remains competitive in the face of mounting rivalry from China and the United States. The government has identified the following challenges for Germany:

This area is of central importance for Germany's future energy supply and the government plans to aid the rapid expansion of onshore and offshore wind power. The aim is to increase offshore wind power generation to 25 gigawatts by 2030 in a development drive that would require investment of around €75 billion ($95.6 billion) according to government estimates. The investment risks are hard to assess because the technology is relatively new. The government plans to promote the construction of the first 10 offshore wind farms with €5 billion ($6.4 billion) in low-interest credit made available by Germany's KfW state development bank.

The government is also considering increasing the use of feed-in tariffs for offshore wind power as an incentive for new projects, but it did not give figures. It also wants to change existing rules on maritime construction projects to prevent power companies from blocking valuable ocean space for long periods of time without starting the construction of a new wind farm.

With onshore projects, the government wants to encourage so-called repowering -- replacing small, old wind turbines with modern large ones. It plans to do so by revising construction and planning permission laws and by trying to boost public acceptance of wind power.

Expanding bio-energy is regarded as crucial for Germany's power sector. Biogas is easy to store and to convert to electricity when there isn't enough wind or sunshine. That enables it to balance out fluctuations in power generation. It can also be used for heating and to power cars.

The German government plans to expand biomass production. As Germany has limited space for growing the necessary raw materials it also plans to promote the import of bio fuels -- but only if they stem from sustainable farming, for example from land where the number of trees cleared is offset by commensurate replanting. But the energy plan doesn't make clear how that sustainibility is to be checked.

The government also plans to promote the increased use of biofuels for heating -- but only if plant operators increase their own energy efficiency at the same time.

The energy plan is noticeably vague when it comes to solar power. The government praised the recent decision to cut the feed-in tariff for solar energy, calling it an important step to prevent excessive subsidization of this sector. It didn't say how heavily the government plans to cut back subsidies. But it's already clear that the Environment Ministry in its current long-term projection predicts that solar power capacity with a total output of 51 gigawatts will go on line by 2020. The institutes Prognos, EWI and GWS by contrast expect a smaller increase, by around 33 gigawatts.

The government is selling its energy plan as a green revolution, but it will continue to rely on conventional power generation.

The lifetimes of the 17 nuclear power stations in Germany will be extended by 12 years on average. Nuclear plants that went on line before 1981 will have their lifetimes extended by eight years, and the younger reactors by 14 years.

The government's main reason for the extension is that power production must remain affordable. It has had energy scenarios drawn up according to which the nuclear reactors will enable the price of electricity to remain relatively constant.

That isn't true from the consumers' point of view because the price of electricity is set by the European Energy Exchange in Leipzig where nuclear power plays virtually no role at all. That's because the market price is determined by the variable costs of whatever power station is required at any given time to cover short-term energy needs. That is usually a gas-fired power station because it can raise and lower its output flexibly, but also has high fuel costs.

The government is sticking to coal for the time being. It wants to use the scope provided by the European Union climate and energy package to subsidize the construction of coal-fired power stations, as long as they are capable of capturing carbon emissions and storing them underground.

This government wants to test this so-called Carbon Capture and Storage (CCS) technology by building two test plants with long-term CO2 storage in Germany by 2020. It plans to review in 2017 whether the technology makes environmental and economic sense.

The aim isn't just to give German industry the chance to export CCS technology to other countries in future. The government is saying clearly that it supports the possibility of using CCS technology in Germany one day. But it remains to be seen if that will be feasible given the prospect of intense public opposition to CCS.

Expanding the power grid is essential to permit the increased use of renewable energies. New grid technology will balance out fluctuations in the supply of wind and solar energy. The government plans to develop a concept for a "Target Grid 2050" in 2011 and aims to speed up power grid development on at least three levels:

The expansion of renewable energy must go hand in hand with the development of new storage technologies. That is the only way to safeguard a stable power supply despite ever-increasing fluctuations in electricity production. The government sees four central areas where action is needed:

It plans to reach these goals through subsidies and other investment incentives.

Germany has ample potential for making energy savings. The government wants to provide financial incentives, information and advice to encourage companies and private consumers to use that potential.

Buildings account for some 40 percent of German power consumption and around a third of Germany's CO2 emissions. A high proportion of buildings are so old that they do not come under energy savings requirements laid down in the 1970s, so the scope to reduce power and heating usage is tremendous.

The government wants all buildings in Germany to be refurbished in line with new insulation standards by 2050. It wants to cut the national heating requirement by 20 percent by 2020 and by 80 percent by 2050. It also wants to significantly increase the share renewable energies have in heating, for example through solar heating.

Recent studies show Germany could save €10 billion ($12.7 billion) per year just by boosting energy efficiency. The government has high hopes for energy efficiency systems that enable companies to save power. Here too it plans to offer financial incentives. From 2013 on it will only allow tax relief on energy taxes if companies make a contribution to energy savings. It also plans to offer development programs in this area for the small and medium-sized business sector.

The government presented its strategy for electric mobility in May. It aims to have 1 million electric vehicles on German roads by 2020 and some 5 million by 2030. To reach this goal it plans to launch new vehicle registration rules in 2011 that give privileges to people who drive electric cars, such as free parking or the permission to use bus lanes.

The government estimates that CO2 emissions for street vehicles can be reduced from 160 grams per kilometer now to 35 grams by 2040 assuming an 80 percent market share for electric and hybrid vehicles by then. 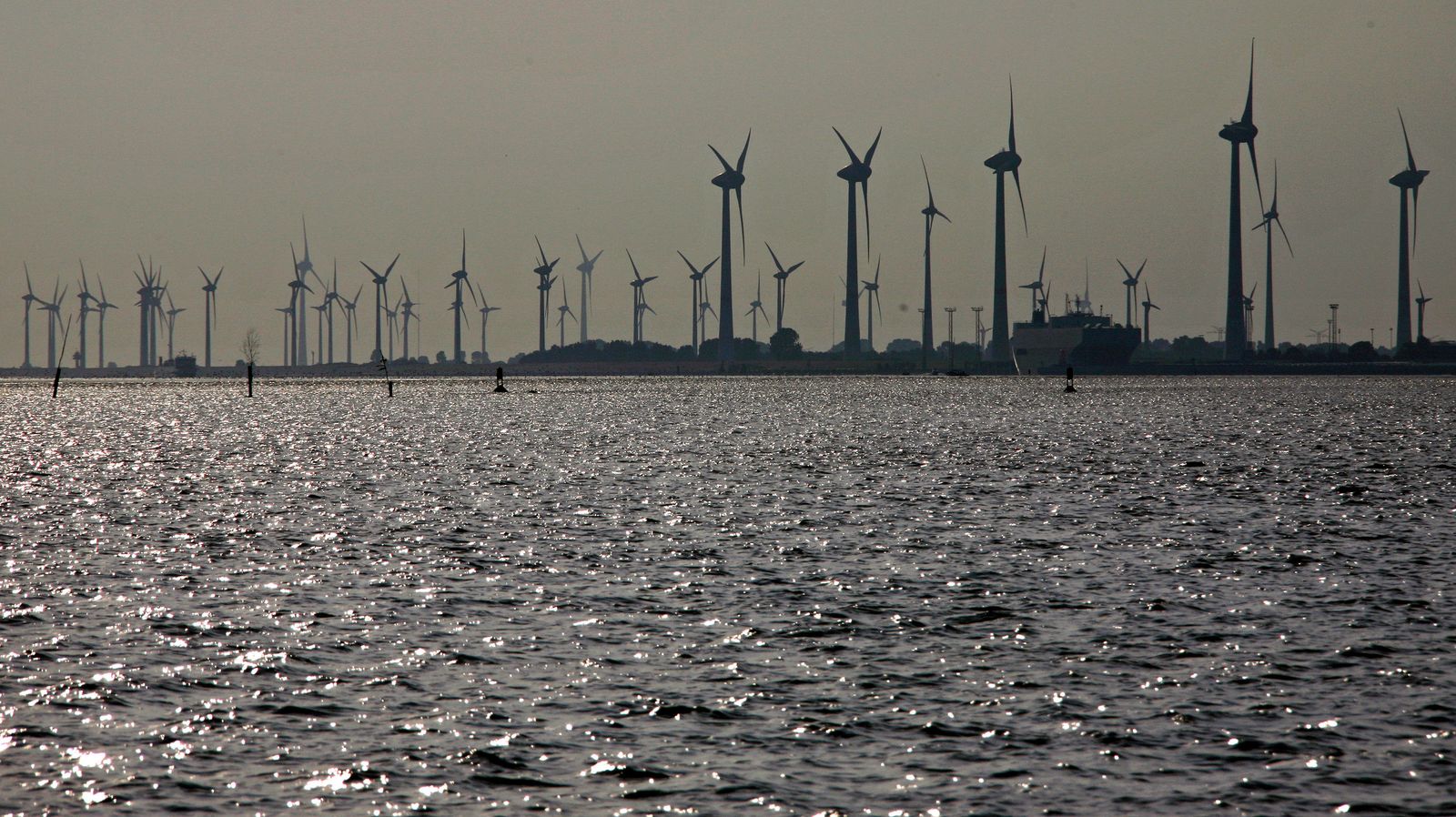 A German wind farm in the North Sea.