The German government is worried that the current shortage of bank credit plaguing industry will worsen later this year and is considering tackling the problem by forcibly taking stakes in banks, similar to the policy adopted by authorities in the United States and Britain, a German newspaper reported on Monday. 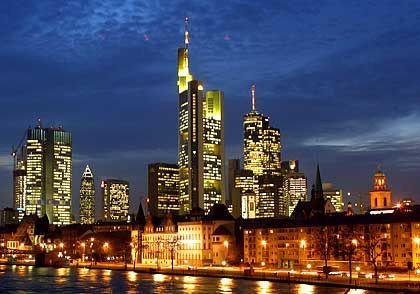 The plan envisages the government forcing banks to take state aid and to part-nationalize them in return, Süddeutsche Zeitung reported, citing unnamed sources.

So far, both Chancellor Angela Merkel and Finance Minister Peer Steinbrück have rejected such mandatory aid and have allowed banks to choose whether to tap the government's bank stabilization fund set up last year.

But analysts at the Chancellery, Finance Ministry and Economy Ministry now concur that Germany is at risk of a credit crunch that could worsen the recession, already the deepest since the 1930s, Süddeutsche reported.

At present small businesses as well as large corporations say they are having problems securing bank loans. The banks have tightened their lending because they have had to make risk provisions to cover remaining toxic assets in their balance sheets, because an increasing number of companies cannot repay their loans in the current economic downturn, and because new international balance sheet rules are forcing banks to put back more equity capital to cover their loans.

The government has argued that it's time banks boosted their lending because several of them have taken billions of euros in government aid.

The government has not decided yet whether to go ahead with forced part-nationalization, the report said. One source at an unnamed ministry said it had been a mistake to make the aid system voluntary, but others in the government remain skeptical about forced measures, arguing that major banks in the US and Britain hadn't boosted their spending either, even though their governments have taken stakes in them.

So far, the German government has taken stakes in Hypo Real Estate and Commerzbank. But more banks are expected to avail themselves of government aid in the months to come because banks are having to undergo so-called stress tests to ascertain whether they qualify for the planned " scheme, under which they can free up their balance sheets by depositing their toxic assets in separate institutions. Those stress tests could reveal new problems at banks and force them to seek government aid.

Any law entitling the government to forcibly nationalize banks could probably only be passed after the Sept. 27 federal election, the Süddeutsche report said. The government is also considering an alternative -- expanding the lending activities of state development bank Kreditanstalt für Wiederaufbau (KfW).

Merkel reiterated on Sunday that she was concerned about the lack of lending and signalled she would put additional pressure on banks to prevent a credit crunch. If loans don't increase, "the government will invite them back and have a serious word with the banks," she told ARD television.