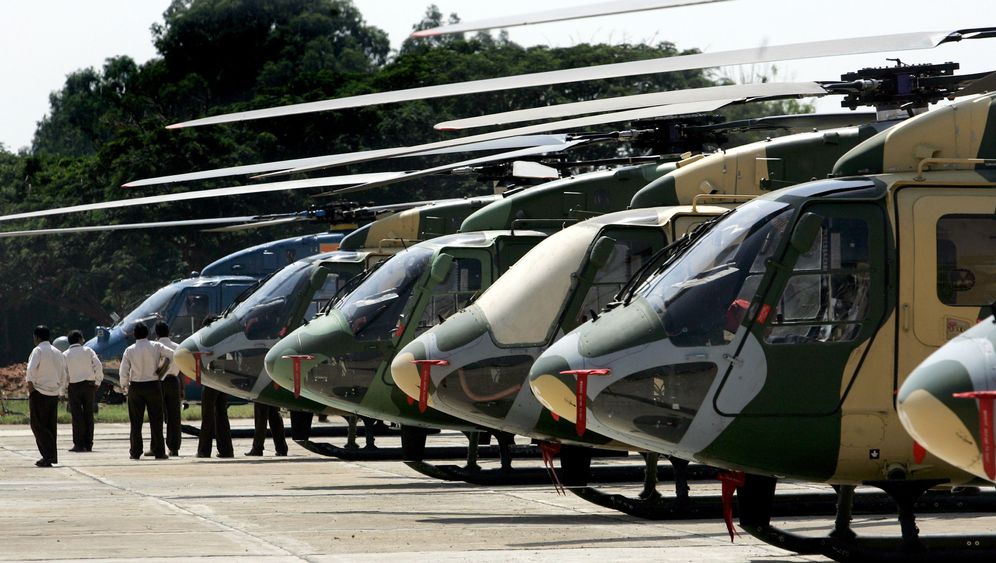 When it comes to arm purchases, India is already a global power: In the next decade, the country plans to purchase at least €100 billion ($120 billion) worth of weapons. Just last year, India's defense budget grew by 34 percent, and it will swell by almost 18 percent this year. For arms exporters, it is a huge business opportunity -- and one that the German defense industry is keen to get in on.

Germany, for its part, is the world's third-largest weapons exporter; almost 100,000 people work in the industry. According to the Stockholm International Peace Research Institute (SIPRI), Germany controls 11 percent of global trade in conventional weapons. The country exports as many arms as France and Great Britain.

Yet so far, German arms manufacturers haven't had much luck in India. The country's business landscape is complicated, with corruption playing a prominent role. It isn't uncommon for companies to stumble over the inscrutable maze. Five years ago, for example, New Delhi cancelled a deal for helicopters produced by the European defense giant EADS on account of corruption investigations. In March, Rheinmetall Air Defense, a Switzerland-based subsidiary of the German automotive and defense company Rheinmetall, was banned from the Indian arms market for its involvement in a bribery scandal.

"As far as I can remember, the last big deal India did with Germany was buying submarines, Class 209, in 1989," says Rumel Dahiya, a retired brigadier general now serving as the deputy director general of the New Delhi-based Institute for Defence Studies and Analyses, which claims to be a "non-partisan, autonomous body," though it was established in 1965 by India's Ministry of Defense. When asked about the country's goals, Dahiya said: "We want as much technological transfer as possible. We want to build and assemble as much as possible in India because India's arms industry wants to become independent."

Indian law requires that at least 30 percent of arms must be purchased from domestic suppliers. This allows the country not only to secure a share of the value-creation, but also to acquire more know-how.

Such a sentiment may sound like a desire to one day produce in India the products offered by foreign manufacturers. But it is a blessing for the German arms industry. German export laws impose requirements on arms exports that are viewed as restrictive when compared to those of other countries. As such, German arms companies have resorted to exploiting loopholes in the laws: They are only too happy to set up joint enterprises with companies in the target countries so that they can manufacture products there. Individual parts delivered to these countries are not subject to the same strict regulations that apply to finished products.

A Lack of Oversight

Domestically, there is growing opposition to this practice, particularly among the center-left opposition. "There is essentially no oversight on German arms exports," says Jan van Aken, the speaker on foreign-policy matters for the Left Party in Germany parliament . "And whenever things get difficult, the industry is quick to immediately move production to the target country."

Katja Keul, a member of the Green Party who sits on the Bundestag's defense committee, complains that Chancellor Angela Merkel's conservative coalition government effectively goes behind parliament's back by making decisions on arms exports within the Federal Security Council, a nine-member body made up of the chancellor and several ministers that meets behind closed doors. "The German Bundestag doesn't even receive information on the process after a permit has been awarded," Keul says. "The relocation of production facilities of German arms firms abroad is difficult enough to control," she adds, "but the government has unfortunately actively helped by approving licenses for them to manufacture abroad."

Still, Keul continues, the issue is not ascribing blame to Merkel's coalition government or being forced to acknowledge that things were no better under the governments that preceded it. "We need to find a joint solution that allows for effective oversight," she says.

Such anger hasn't only been sparked by Germany's decision to abandon a decades-old ban on exporting tanks to Saudi Arabia and Indonesia's recent request to purchase German-made Leopard 2 tanks. It also results from increased efforts by German arms manufacturers to do business with India by skirting restrictions. Indeed, there are likewise critical voices within Merkel's coalition parties -- Merkel's Christian Democratic Union (CDU), its Bavarian sister party, the Christian Social Union (CSU), and the business-friendly Free Democratic Party (FDP). Specifically, some are opposed to the government's proposal to relax restrictions on arms exports in order to make it easier for German companies to compete with their European rivals. Ruprecht Polenz, chairman of the Bundestag's foreign affairs committee and a CDU member, told SPIEGEL ONLINE on Sunday: "Weapons aren't a product like any other. Our defense-export policy should remain restrictive for good reasons."

A German Gold Rush in India

Despite the controversy, there have been no signs of restraint. German companies want a share of the billions to be made from Indian arms purchases. For example, EADS continues to hope that it can land one of the biggest arms deals in history: the Indian air force's purchase of 126 new fighter jets. In January, the French defense manufacturer Dassault beat out EADS for the right to negotiate exclusively with the Indian government about the fighter order. Still, no deal has yet been sealed, and since the costs of the French fighter model have been set very low -- and possibly too low -- EADS has not given up hope that the order may once again be put to tender.

EADS has also put in a bid for a contract to supply the India's navy with new multipurpose helicopters. The company already supplies components for the "Dhruv," a helicopter capable of laying landmines that was jointly developed by India's Hindustan Aeronautics Limited and Messerschmitt-Bölkow-Blohm, an EADS subsidiary based in Ottobrunn, Germany. The export of these components is not covered by arms-export restrictions.

EADS has also established several footholds in India, for example, with its R&D center in Bangalore. "We do not see India only as a partner, but also as a manufacturing hub where such systems can be assembled and later exported to other countries," Stefan Zoller, CEO of EADS' Defence and Security Division, said at the Berlin Air Show (ILA) in May 2008.

In addition to EADS, almost all German arms manufactures are active in India:

Indeed, TKMS has announced that it is working on several projects with Indian companies. "All of them share in common the client's demand for technology transfer as well as the demand for the integration of Indian devices and facilities. That is established practice," said a company spokesman. TKMS does not have its own production locations in India, he added, but it has successfully worked together with local shipyards and suppliers for some time. "India represents a growing market with high technological standards," he said. The company operates internationally, he continued, noting that TKMS signed a contract in 2010 to deliver superstructures for corvettes. "The material packages for these superstructures will be assembled by Kockums, in Sweden, and configured on the two corvettes in Calcutta together with the client as part of a comprehensive technology transfer." The Kockums shipyard is owned by a TKMS subsidiary.

Parliamentary skeptics in Berlin are also worried about the issue of German defense goods making their way to third countries. In their view, there are not enough ways to guarantee that such products stay in the country that purchased them. Although the German government uses "all available information" to monitor whether countries receiving German arms are exporting them further, one critic notes, the process cannot be adequately controlled.