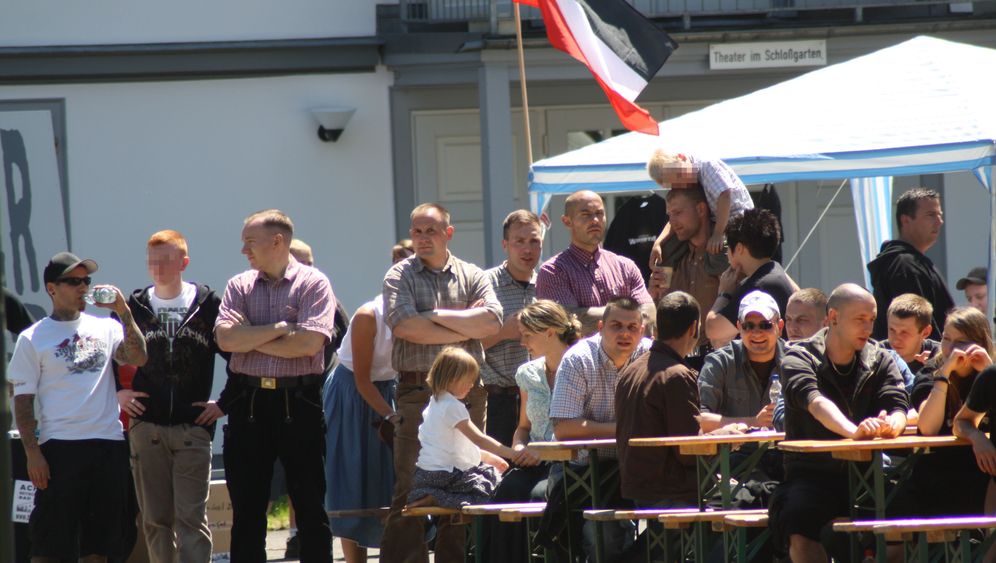 Summer vacation has arrived in Germany. For many children being raised in neo-Nazi families, this means their parents have arranged for them to spend their free time doing what they think will serve the Volk and Vaterland. Their aim? A nationalist upbringing outside the mainstream.

Such activities can include camping, survival training and trips on horseback with the children of other neo-Nazis. Indeed, more and more families in Germany's right-wing extremist scene are coming to organize their vacations and free time along ideological lines.

Some locations even offer discounts to attract the children of neo-Nazis. Take the example of an equestrian farm in Ahrensfelde, a small town just a short drive northeast of Berlin. SPIEGEL ONLINE has obtained a copy of a May e-mail that refers to "comrades," in which the horse ranch offers a full week of riding -- complete with campfires and nocturnal hikes -- for just €150 ($214). Children are reportedly also divided up into groups according to their riding abilities and "Weltanshauung," or "world view." The farm's operator refused to answer questions about the offer.

Neo-Nazi vacationers can also take advantage of rental homes in a mountainous region south of Dresden known as "Saxon Switzerland." One of these belongs to a politician for the far-right National Democratic Party of Germany (NPD). In August 2010, she took out an ad in the NPD paper Deutsche Stimme directly targeting this crowd. The ad pointed out that vacationers with such political leanings should feel welcome in the area because 21.1 percent of its voters support the NPD.

Then there is the "Lower Silesian holiday village" in Saxony's Oberlausitz region, where 42 simply furnished bungalows and a campground right on Lake Quitzdorf offer much space and privacy -- neo-Nazi families included. "Anyone is welcome if they can behave themselves and like to vacation in the area," says Änne Redeker, a member of the family that manages the establishment. When guests register to stay there, she says, they are "never asked about their political views."

On a holiday weekend in late June, several former instructors of the banned far-right youth organization German Youth Faithful to the Homeland (HDJ) wanted to gather once again with their one-time charges at a "major camp" somewhat off the beaten path at the same company's Finnhütte holiday village. Although German officials shut down the HDJ in 2009 for seeking to indoctrinate children with racist and National Socialist ideology, it continues to operate underground. In response, police blocked the planned reunion and turned back arriving children.

In the meantime, other neo-Nazi families were holding a celebration in two vacation bungalows nearby. Neither the operators of the holiday village or other tourists appeared to have been bothered by the conspicuous clothing of several fathers, who were wearing shirts emblazoned with phrases such as "Death Penalty for Child Molesters" and "National Socialist." Operators claim to have simply not noticed.

The more brazen the self-identified "National Socialist Movement" has become in Germany in recent years, the more energy it is devoting to imembers' children. Investigators estimate that neo-Nazi households are raising several thousand children to be familiar with weapons, violence, raiding private homes, Nazi cult objects, songs of the Hitler Youth and Waffen-SS, and the worshiping of major figures from the Third Reich. They are unwittingly becoming part of a sworn "fighting community" hidden behind a middle-class façade.

These children are massively influenced not only by their parents, but also by radical organizations like the HDJ and its successor groups. The children of far-right extremist parents grow up as part of collectives of "comrades." In a recent report focused on this issue, the domestic intelligence office of the eastern state of Brandenburg found that the parents of these children rely on "dances, children's parties and the apparent feeling of security in (neo-Nazi) youth camps."

The results of this indoctrination are grotesque: One person who abandoned the scene told SPIEGEL ONLINE that a 9-year-old girl quoted passages from Hitler's "Mein Kampf" in the company of adults to make her father proud. A photograph from "Fest der Völker," a right-wing Rock music festival held in the Thuringian town of Pössneck in 2009, shows a small child with blond curls and the number "28" on its mini sweatshirt, which is code for "Blood & Honour," a neo-Nazi network outlawed in Germany.

In the self-proclaimed "national village community" of Jamel, a tiny town near Wismar in the far northeastern German state of Mecklenburg-Western Pomerania, neo-Nazis both young and old gather for group photographs in which all of them wear shirts bearing the caption "Jamel - Gau Mecklenburg," using a term for an medieval administrative subdivision (Gau) that was revived in the Nazi era. In January 2011, police confiscated a serviceable submachine gun with 200 rounds of ammunition and a number of stolen goods at the home of the leader of the neo-Nazi clique in the notorious village.

For some time now, these families have no longer belonged to subcultures on the fringe of society. Instead, most of them now lead their lives right in the middle of society. Young couples with several children now mask their far-right extremist beliefs and ideas about "soldierly" pedagogy with the semblance of middle-class normalcy. Indeed, as the NPD paper Deutsche Stimme underlines, the "nationalist's life task" is to bring up the next generation of neo-Nazis.

This seems to entail an inseparable interweaving of private and political lives. "In many places, the everyday world of people is starting to be one in which their own private world is being completely adapted to this inhuman ideology," warns Reinhard Koch, who works for an advocacy group against far-right extremism and violence in the central northern city of Braunschweig. "In this way, youths are made into a political instrument."

Domestic intelligence officials in Brandenburg have determined that this type of "political abuse" often starts right after birth. Parents of such children favor names that sound Nordic, such as "Markward." In such cases, the report continues, "right-wing extremist parents make a connection with National Socialism with what they name their children, thereby transforming what are in the end rather everyday names into racist calling cards."

Within this closed community, gender determines one's position. Emancipation and gender equality are scoffed at as synonyms for the "re-educated" society imposed by the Allied victors of World War II.

Indeed, according to the intelligence officials in Brandenburg, children who grow up in far-right extremist families are taught to view democracy and the modern German state as doomed to failure while the Third Reich and a homogenous nationalist "Volksgemeinschaft" -- the phrase the Nazis used to describe a supposedly pure racial community -- are presented as an ideal world.

In order to shield their children from "damaging" external influences, these parents often elect to isolate them from society at large. In fact, law enforcement officials in eastern Germany have noticed a growing trend that has these families -- including grandparents and in-laws -- moving closer to each other and forming communities of shared values to make it easier for them to live how they want. Social workers have also noticed a trend that has far-right families in urban areas acting similarly by forming these kinds of "communities" in apartment complexes or neighborhoods.

Such trends have led some to call for state intervention. "If ideological influence reaches such proportions that it can threaten children's well-being, state or civic bodies are obliged to look into the situation," says Günther Hoffmann, a prevention expert based in Anklam, a town in the far northeastern corner of Germany. A 2010 report entitled "Parenting in the Tense Environment of Right-Wing Extremism" by " Kulturbüro Sachsen," a nonprofit working against right-wing extremism in the former East Germany, addresses the issue of whether Nazis are "bad parents per se." The study posits that a neo-Nazi upbringing only threatens a child's well-being when it involves corporal punishment, psychological injury or other degrading acts. In particular, it found that "eliciting extreme anxieties, excessive rules of behavior and forcing them to assume the role of an outsider are suggestive of an abusive exercise of parental care."

Neo-Nazi pedagogy often owes much to racial ideology, paganism, Nazi art, anti-Semitism, militancy and a belief in one's own superiority. Such efforts are aided by reprints of Nazi-era children's books available from online stores, and specially designed riddles and puzzles showing Germany's 1937 borders, for example. In 2010, a member of an anarchist, anti-fascist group in Freiburg wrote on the left-wing platform Indymedia about a mother who supposedly baked cakes with SS symbols on them and sewed swastika flags with her children. A teacher also wrote about a family in which the children were forced to address their parents as "Mr. Father" and "Mrs. Mother."

On weekends and vacations, children in these families are often simply treated as little "comrades." They take part in the cultural program of the nationalist "movement." Indeed, having them at NPD children's festivals and traditional celebrations is apparently used as a way to attract other families.

Fearing that doing so might diminish their influence and control, neo-Nazi parents are also loathe to have their children attend state-run educational establishments. According to domestic intelligence officials in Brandenburg, these parents complain in online forums about how their children would "really degenerate" in such state schools or kindergartens.

In various states in both western and eastern Germany, teachers and other educators have reported problems with children from far-right families. One told the story of a boy who would paint swastikas in kindergarten and regularly respond to any criticism by saying that it was "just a rune." Another boy reportedly insulted the child of immigrant parents, saying: "You'll also be gassed!"

While these children generally behave well around their parents or other "comrades," they tend to do exactly the opposite when they aren't in such an environment. At school when the children gather for "morning circle," those from such families tend to keep quiet and reveal little about their homelife. Educators from Mecklenburg-Western Pomerania say that many react in ways that are flustered, overly scripted or particularly aggressive. "We are going to encounter massive problems if we don't deal with this issue more aggressively," warns Hoffmann, the prevention expert from Anklam.

Indeed, in Güstrow alone, a large district in Mecklenburg-Western Pomerania with fewer than 100,000 residents, experts estimate that there are roughly 60 children growing up in more than a dozen neo-Nazi families. They also say that it's not just the parents who are displaying "a closed, right-wing extremist worldview."