Social Democratic Party (SPD) Chairman Sigmar Gabriel and parliamentary opposition leader Frank-Walter Steinmeier, two of Germany's highest ranking SPD politicians, have received a blessing from above, an endorsement from the very highest of the country's Social Democratic authorities. They'll be able to invoke that blessing no matter what course they take and what arguments they employ in the next weeks and months.

They did what all Social Democrats must do when they want to clear themselves of any suspicion of acting in a populist manner -- they spoke with former West German Chancellor and SPD politician Helmut Schmidt. 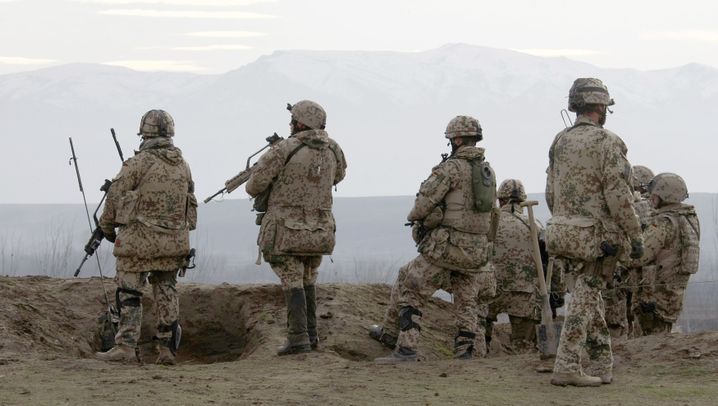 Gabriel and Steinmeier visited Schmidt's office the Tuesday before Christmas. The discussion topic was Afghanistan. Schmidt was skeptical from the start about the Bundeswehr, Germany's Armed Forces, being deployed there, which makes him a good conversation partner for Social Democrats now planning to extricate themselves bit by bit from responsibility for the Afghanistan mission -- even though their party made the decision to deploy there jointly in 2001 as part of an SPD-Green governing coalition. The visit to Schmidt seems to lend credence to the idea that SPD leadership intends to renege on the agreement Germany's major political parties made about Afghanistan.

A Turning Point for the SPD

The Social Democrats haven't yet settled on a concrete strategy, but the general goal is clear. The SPD, whose leadership saw German soldiers fly bombing missions against enemy positions for the first time since World War II, now wants to transform back into a peace party. And the matter of Afghanistan has landed squarely where Chancellor Angela Merkel never wanted it to be -- as a point of contention between Germany's two largest political parties.

It's an uncomfortable situation for Merkel, who strives to keep as large a majority as possible behind the Bundeswehr mission. Afghanistan was never meant to be her war alone. This is especially important with state-level elections in North Rhine-Westphalia, the country's most populous state, coming up in May. Merkel has no desire to be seen as the war chancellor as she heads into an election that will determine the balance of power in the Bundesrat, Germany's upper legislative body representing the country's 16 states. That body is currently led by a coalition between her conservative Christian Democratic Union (CDU) and the business-friendly Free Democratic Party (FDP). Merkel will do anything to keep Afghanistan out of the election campaign.

But that may prove difficult. Starting in January, a German parliamentary probe in the Bundestag is expected to shed light on the bombing of two tanker trucks near Kunduz in September, as well as the government's handling of the crisis. An international conference on Afghanistan, initiated by Merkel, will also take place in London at the end of January. All this strongly suggests that the subject of Afghanistan will dominate Germany's political debate in the coming months.

Merkel now has to decide whether to send more soldiers to Afghanistan, as NATO is calling for. Apparently that decision will be dependent on the results of the London conference. In reality, though, it depends more on the SPD.

The Social Democrats are already certain of one thing -- they won't endorse a mandate for sending more combat troops. Gabriel and Steinmeier agree on that point. Meanwhile, the Christian Democrats are outraged at the Social Democrats. "It would be fatal for the SPD to abandon its former position," says Ruprecht Polenz, chairman of the Committee on Foreign Affairs in the Bundestag, Germany's parliament. "I don't see what has changed so fundamentally in the three months since the SPD is no longer in the government."

The current governing coalition will hardly be able to achieve a significant troop increase alone, even if experts at the Defense Ministry support the move. But if the CDU and FDP pushed it though parliament on their own, it would be the first foreign deployment of the Bundeswehr that was passed without support from the opposition. In the run-up to an important state election, the stakes are too high for the parties to take that risk.

The government's message to voters is supposed to be not "more soldiers" but "the end of the war is in sight." There's no concrete exit date, but ostensibly the "prospect" of one. The government's new slogan is "self-supporting security." It's meant to sound reassuring, but in reality it's a renunciation of the goals with which the country first entered Afghanistan nearly nine years ago.

Talking to the Taliban

The new concept envisions handing over responsibility for law and order in the country to the Afghans themselves -- if necessary, even to those the war was originally started against. In a recent interview, Defense Minister Karl-Theodor zu Guttenberg vaguely described the necessity to consider whether it's possible to politically intensify what Henry Kissinger called "channels of communication." What he actually meant was -- we're going to have to talk with the Taliban, too.

That's a new position. Two years ago, Guttenberg declared that anyone looking to turn Afghanistan into a graveyard for foreign soldiers could never be a negotiating partner. It isn't going to be easy for him to explain this sudden change of course.

Nonetheless, experts consider the change in strategy wise. Volker Perthes, director of the German Institute for International and Security Affairs, points to examples of civil wars in countries such as Northern Ireland, El Salvador and Iraq. These cases show, he says, that it's necessary to approach all groups that have a base of support in the population. "If you can't conquer one group in civil war, you have to talk to them," Perthes says.

Political speaking, this new tack is a touchy subject. Bernd Mützelburg, Germany's special representative for Afghanistan, found that out when he explained the new policy to the Bundestag's Committee on Foreign Affairs last week. Does that mean talking to warlords like radical Islamist Gulbuddin Hekmatyar or Taliban leaders like Mullah Omar, members of the committee asked? Mützelburg replied in the affirmative, saying that history has seen a good many peace talks with people who were not the most desirable dialogue partners. Of course, he added reassuringly, there must always be a line drawn in the sand.

The Bundestag members were dumbfounded. "I can't imagine a peace settlement with those primarily responsible for war crimes," said Kerstin Müller, a foreign policy expert with the Green Party. There was unease even within the CDU's ranks.

But the attempt to enter into dialogue with the Taliban isn't a new idea. The coalition of SPD and Greens under Chancellor Gerhard Schröder, in office from 1998 to 2005, briefly tested the same strategy. Representatives of Germany's Federal Intelligence Service (BND) met Taliban representatives under strict confidentiality in summer 2005. The negotiators traveled to Switzerland, considering a meeting in Germany too risky -- they didn't want to give the Taliban the impression it was welcome in Germany as an official delegation.

Above all, the BND wanted to know if the insurgents were prepared to distance themselves from al-Qaida. If so, Germany would consider a range of benefits in a multi-step process, starting with humanitarian aid for the Afghan population and possibly culminating with official negotiations. The Taliban representatives pressed for recognition as a political power, similar to Sinn Fein in Northern Ireland or the PLO in the Middle East. They wanted to be taken off the list of terrorists.

The two sides met more than half a dozen times, but the project was silently laid to rest within the same year. Ernst Uhrlau, intelligence coordinator for the Chancellory at the time and currently head of the BND, deemed that negotiations with the Taliban were not the BND's job and declared that the project should be terminated.

Allowing the West to Save Face

The new approach is intended to allow the West to withdraw from Afghanistan without a loss of face. It's a delicate political operation, and the chancellor and Foreign Ministry weren't amused by Mützelburg's remarks. Merkel and Foreign Minister Guido Westerwelle prefer not to talk about the consequences of the new strategy. Naming potential negotiation partners in Afghanistan could scare off voters and prove useful to the SPD.

The government would prefer to fob off responsibility to Kabul. Finding negotiating partners within the country is primarily a matter for the Afghan government, those surrounding Merkel and Westerwelle say -- and the only thing that matters is that any agreements they reach are grounded in the Afghan constitution.

But there are limits to how seriously that suggestion can be taken. The country's constitution stipulates, among other things, that men and women possess the same rights and responsibilities and that the government should take action against drug cultivation. Local rulers who feel obliged to work for women's equality or participate in the war against drugs, however, will prove hard to find. Berlin knows that, too.

It remains to be seen whether Merkel will manage to keep her opposition on board. SPD leadership plans to establish its position soon. There will be a hearing with experts at the Willy Brandt House, the SPD's Berlin headquarters, on Jan. 22, and three days later former Chancellor Schmidt will address the topic with the party's executive committee.

According to the plan so far, those two events should produce a proposed resolution, which the party can then discuss in February. It's not yet clear in what form that will happen, but the feedback generated should provide a foundation for reaching a final position at the federal level. Extreme positions like demands for an immediate withdrawal of troops, however, won't be taken into account.

A Credibility Problem for the SPD?

Nevertheless, a signal has been sent. If the government decides against sending more combat troops, Gabriel can claim the CDU is coming around to the SPD's position. If the CDU does decide to increase troops, however, the SPD can excuse itself from responsibility for the mission, pointing out that it already warned the government.

Gabriel's new tack is not free of risk. A confrontation with the governing parties would be favorable to those within the SPD who were always skeptical of the Afghanistan mission or rejected the idea entirely. But if the Social Democrats fundamentally distance themselves from the mission, they could be faced with a credibility problem.

SPD leaders are conscious of that danger. Niels Annen, a member of the party's executive board, also opposes and increase in the number of combat troops. Still, he warns: "Eight years of presence there also mean a certain responsibility. It would be problematic for us to take a stance of simply leaving because it all turned out differently from how we imagined. We can't completely abandon the policies of recent years." 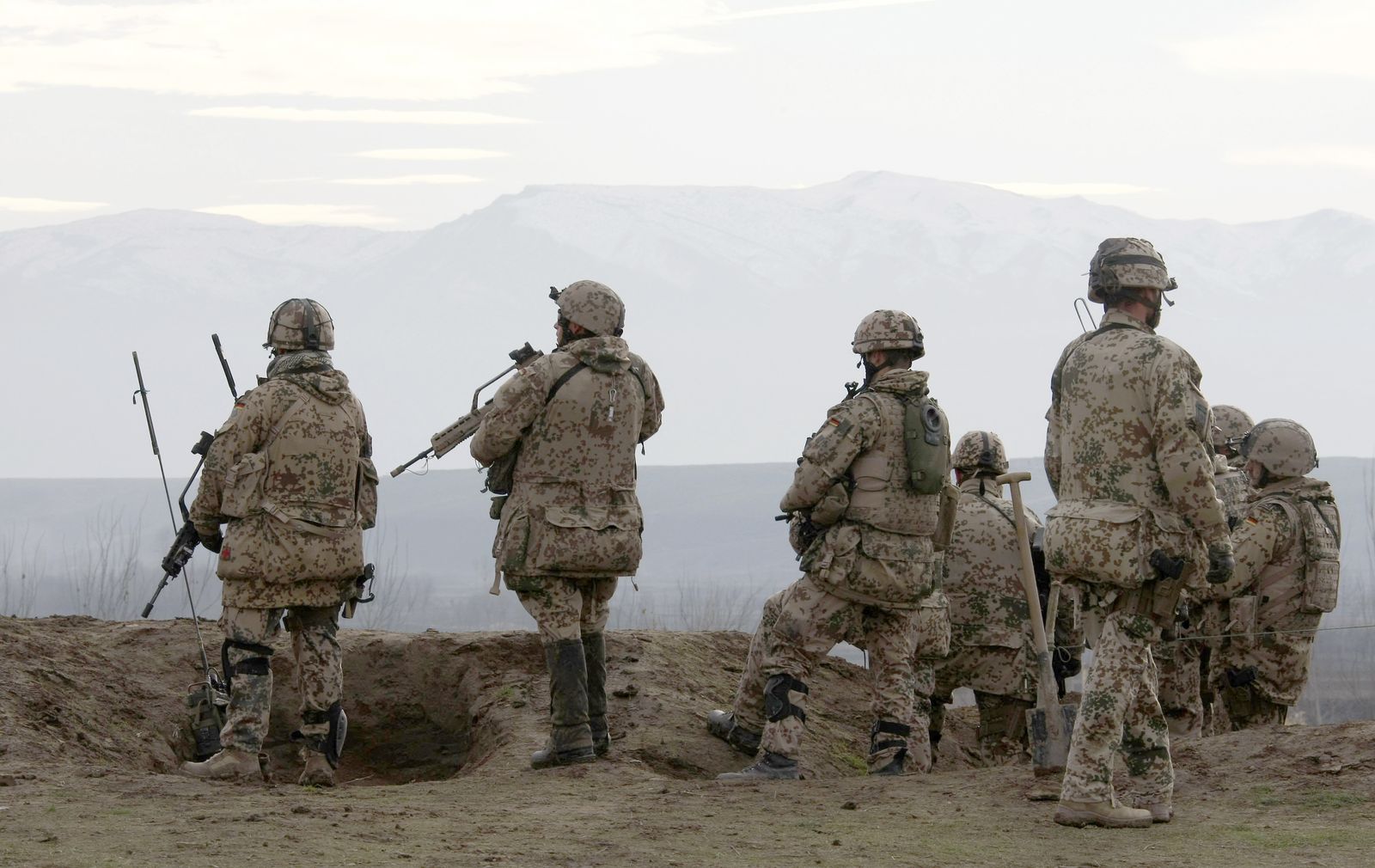 German Bundeswehr soldiers near Kunduz, Afghanistan: "It would be problematic for us to take a stance of simply leaving because it all turned out differently from how we imagined. We can't completely abandon the policies of recent years."

German Bundeswehr soldiers near Kunduz, Afghanistan: The SPD, which approved the deployment in 2001 when it governed together with the Green Party, is currently deeply divided over the mission. Many want to withdraw from the Hindu Kush, but others warn Germany must remain in the troubled region. "It would be problematic for us to take a stance of simply leaving because it all turned out differently from how we imagined," said Niels Annen, a member of the SPD's national executive board. "We can't completely abandon the policies of recent years."