Inmates from the US prison at Guantanamo Bay might find a home on German soil if America decided to close the facility, more than one German official has suggested since Monday. A spokesman for Foreign Minister Frank-Walter Steinmeier told SPIEGEL ONLINE that Steinmeier was working on the legal problems "personally" -- a sign that the German government may shift its position. 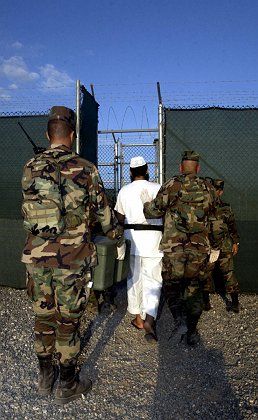 Ever been to Europe?

Thomas Steg, a spokesman for Chancellor Angela Merkel's office, clarified at a news conference Monday: "We would need to, and want to, examine this issue when the United States has made clear what its specific plans and timeline are." And Germany's Federal Commissioner for Human Rights, Günter Nooke, told a German broadcaster that the Guantanamo camp was America's problem, but any decision to close it "should not fail because no one can decide where to send the prisoners."

These signals make Germany the second European nation, after Portugal, to hint that a resettlement deal for Guantanamo prisoners might work under an Obama administration -- which would allow the Pentagon to close its prison. A total of six European countries are said to be mulling legal issues involved.

US authorities have sent hundreds of prisoners home already, but the remaining 250 present the most difficulat legal problems. Some, like Khalid Sheikh Mohammed, are considered dangerous terrorists, but evidence against them gathered under torture -- including methods like waterboarding -- may be inadmissible by US courts.

Another class of prisoner is now considered innocent by the Pentagon, but their home nations have poor human-rights records. It's against US policy to send them to countries where they might be tortured, and the US under President Bush has also refused to resettle them on American soil, where they might pose a threat. So Washington for years has asked for help from third-party governments. Europe, until recently, has said no.

Portugal was the first western nation to signal a change on December 10, when its foreign minister, Luis Amado, published an open letter declaring Lisbon's readiness to consider resettlement. He challenged other EU members to do the same.

But Thomas Steg, the German government spokesman, said on Monday that Berlin would make no special arrangements with Washington. "If we begin to review such closure plans and take a stance, then it can only be in a European context based on a discussion with all member states," he said, adding that "side deals, swaps or conditions" imposed by Washington would be unacceptable.

One complication in Germany is that any resettlement decision would have to be made with the leaders of the federal states involved. Christoph Ahlhaus, interior minister for the city-state of Hamburg, told a Hamburg newpaper on Monday that prisoners who were "provably innocent" might be resettled in Germany. But he said the cases would have to be handled one by one.

"Germany cannot become a country where terrorists from all over the world are simply shunted," he said. "But a prisoner who is provably innocent, or someone who has paid a penalty commensurate with German law and is not dangerous -- Germany can look into accepting him."

The prisoners under consideration for resettlement in Germany include 17 Chinese Muslims, or Uighurs, who according to Washington would be tortured if they returned to China. Günter Nooke, the German human-rights commissioner, called on Germany last week to consider resettling them. Germany is a logical place for them to live because the "World Uighur Congress " -- the largest Uighur community outside China -- is based in Munich.

But officials in the state of Bavaria have so far resisted the idea of accepting them. "From the Bavarian point of view," said state Interior Minister Joachim Herrmann, "it isn't clear yet why people who have been held in Guantanamo because of their supposed danger to the public should simply be allowed into Bavaria."