A German election campaign isn't complete without an appearance by Nobel laureate Günter Grass. The famed author of the "The Tin Drum" has supported the center-left Social Democrats for half a century and appearances with the SPD candidate du jour have become mandatory.

There is, however, just one problem. Grass is no longer the moral authority that he once was. Ever since 2006, when he admitted to having been a member of Hitler's feared SS as a 17-year-old, his words have lost much of their weight -- and his benefit to the SPD has become questionable.

This week provided yet more proof that the 85-year-old has jumped the shark. In a Wednesday appearance with this year's SPD candidate for chancellor, Peer Steinbrück, Grass took it upon himself to blast Chancellor Angela Merkel and, in a verbal assault not without irony, to criticize her past as a member of the East German youth organization FDJ, the Communist Party's version of the Boy and Girl Scouts.

In condemning Merkel for "tarnishing our relations with our neighbors in an extremely short amount of time" by virtue of the course she has pursued in the euro crisis, Grass said that her approach is a product of her political upbringing. "During her time in the FDJ, she learned conformity and opportunism. Under (former Chancellor Helmut) Kohl, she learned how to wield power."

Grass' comments, to be sure, are hardly of the scandalous variety. A recent book, after all, went even further, suggesting that Merkel may have been closer to the communist apparatus of East Germany than previously thought. But given Grass' own past, and the fact that he was speaking at an SPD event, Merkel's conservatives proved unable to resist the urge to attack.

'Nothing But an Embarrassment'

"Günter Grass, of all people, a man who kept his own membership in the SS silent for decades, is now criticizing Angela Merkel's past in East Germany? That is nothing but an embarrassment," Erika Steinbach, a conservative parliamentarian with Merkel's party, told the tabloid Bild. Several other center-right politicians have likewise gone on the attack in recent days.

So too, however, have some from the SPD. "With all due respect for Grass as a writer, such vilification of life in East Germany is unacceptable," said Erwin Sellering, the center-left governor of the eastern German state of Mecklenburg-Western Pomerania. "Especially 23 years after German reunification."

Grass' appearance with Steinbrück was primarily to promote the author's new book, a 1,230 page collection of letters he exchanged with Willy Brandt over the course of decades. And it comes at a time in the author's career when his famed sharp tongue has begun to seem more tiresome than trenchant. His April 2012 poem "What Must Be Said," in which he blasted Israel as being a threat to world peace, was not well received and earned him a travel ban to the country as well as accusations of anti-Semitism. While much of the criticism was overwrought, his sequel, a preachy poem attacking Merkel's approach to the Greek economic crisis, did little to repair his eroding reputation.

Grass didn't limit his criticism to Merkel on Wednesday. Calling her elimination of conscription "shameful," he said that the German military had devolved into nothing more than an "army of mercenaries that gets sent on missions abroad." He said it threatens to become a "state within a state" as did the German army during the inter-war Weimar period.

That too was enough to ruffle conservative feathers. "Mr. Grass has long bid farewell to that circle of people whose political opinions can be taken seriously," CDU defense expert Ernst-Reinhard Beck said in a statement. "German soldiers do not need to be defamed as mercenaries, especially not from a former member of the SS."

Steinbrück, though, beat him to the punch. "Mr. Grass, might I be allowed to contradict you," the SPD candidate said. "The German army is definitely not a mercenary force," he said. The SPD then noted that no further campaign events with Günter Grass have been planned prior to the elections in September. 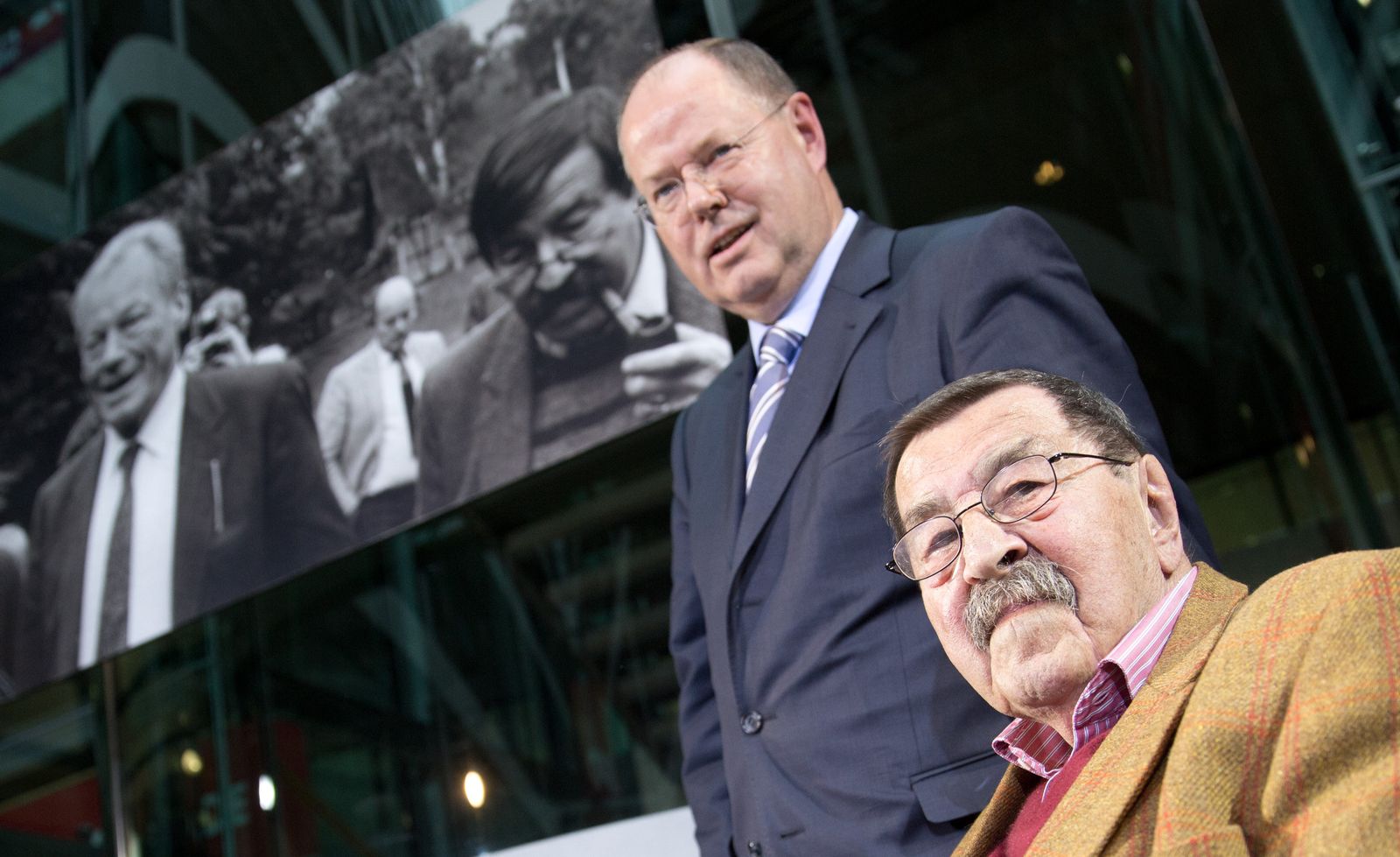 SPD Chancellor candidate Peer Steinbrück together with Nobel laureate Günter Grass at an appearance this week.