"What is that all about?" was reportedly the first reaction of European Commission President Jose Manuel Barroso when he heard that Berlin's new commissioner was to be Günther Oettinger, the governor of the state of Baden-Württemberg. He immediately called up German politicians in Brussels who were said to be just as surprised as he was at the new German government's personnel choice. Depending on their temperament they either greeted the news with shocked perplexity or amusement: The overwhelming assessment was that Berlin was using Brussels as a dumping ground for burned-out local politicians.

Of course the spokespeople for Oettinger's party, Chancellor Angela Merkel's conservative Christian Democrats, in the European Parliament did their duty and declared Oettinger to be a "political heavyweight with great knowledge of economic matters." But did they really believe that?

Other countries -- including those that Germany likes to regard as Euro-skeptic and nationalistic -- tend to send ambitious top political performers to Brussels and then bring them home for a career jump. Italy's former commissioner, Franco Frattini, for example, was called back to Rome in May 2008 to become foreign minister. The same career move had been made shortly beforehand by his Cypriot colleague on the commission, Markos Kyprianou. Just four months ago Lithuania's commissioner, Dalia Grybauskaite, who had managed the EU budget, was summoned back to Vilnius to become the country's president.

Oettinger does not fit into this category. "No European profile," was the assessment of the Brussels-based news agency the EU Observer. "Unknown on the international and European scene," was the reaction of the Libération columnist Jean Quatremer. High-ranking EU officials described Oettinger's rare appearances in Brussels as: "brittle, uncommunicative, inhibited." And Frank Schimmelfennig, professor for European politics at the Swiss Federal Institute of Technology (ETH) in Zurich, was also skeptical about the decision. "The appointment of a purely regional politician to the European Commission is pretty unusual," he said.

Roland Koch, the CDU governor of the state of Hesse, current Interior Minister Wolfgang Schäuble who is to serve in the new government as finance minister, or even German MEP Elmar Brok were all were regarded as suitable candidates to take over from the outgoing German commissioner Günter Verheugen. No one had even considered Oettinger, not even Oettinger himself. The call from Chancellor Angela Merkel on Thursday afternoon offering him the Brussels job came out of the blue. "I would like to have the weekend to think it over," Oettinger told her. However, Merkel wanted an answer by the next morning. On Friday he accepted the position: "I believe one cannot turn down such a unique offer."

Oettinger, a man who seemed increasingly unsuccessful in Baden-Württemberg -- the CDU only achieved 34 percent in the state in September's federal election --, is now supposed to be Germany's strong man in Brussels. At first glance this seems hard to imagine. He has an image problem and even his party colleagues regard him as something of a technocrat and a poor communicator.

However, even his political rivals admit that Oettinger is good at grasping technical details and has analytical skills. These talents were on display when he acted as the CDU's chief negotiator during talks over federal reform. The brittle but effective Oettinger could actually end up being the perfect fit in gray technocratic Brussels.

It is still not clear if Oettinger will take over the industry brief from Verheugen or be given another important role in the commission such as competition or the internal market. The usual procedure would be for Barroso to dole out the responsibilities after all the member states have nominated their commissioners. The commissioners then have to be approved by the European Parliament. "It is not to be expected that the grilling by the parliament will be a problem for Oettinger," says Schimmelfennig. Oettinger's opinions on European policy are "moderate, the majority in the parliament will work in his favor and he would be expected to be competent when it comes to familiarizing himself with his portfolio."

Is he capable of becoming a strong man in Brussels? Merkel is most likely hoping for the opposite. She doesn't want a strong commissioner, because she doesn't want anything from the European Commission. In her view, it should stay out of the big political decisions. The chancellor, together with the leaders of the other big powers in the EU, has long been attempting to steer the power in the European Union away from the Commission and toward the European Council. That is where the leaders of the 27 member states make the decisions, in particular the big leaders: Merkel, French President Nicolas Sarkozy and British Prime Minister Gordon Brown.

In this light, Merkel's decision on the future German commissioner is far from "political madness," as it was described by Rebecca Harms, the Greens floor leader in the European Parliament. National interests have priority at the moment. Merkel has long recognized that it is laborious to attempt to reach European solutions and it often yields poor results. And she believes that she is best placed to represent Berlin's interests in Europe -- by that she means the interests of her government, her party, and herself.

She is also likely to have calculated that an increasingly insubordinate Oettinger can do less damage in Europe. One reason is that he may have difficulties making himself understood due to his accent. The English-language EU Observer remarked that he speaks with a "strong Swabian dialect" that Germans from other regions find difficult to understand.

Yet Oettinger could surprise people here too. He says he is looking forward to his new job and feels he is well prepared for Brussels, even when it comes to communication skills. He told the Hamburger Abendblatt that he had a good level of English and "can understand French and speak it tolerably."

He admitted to journalists in the state capital Stuttgart on Monday that he would still have problems with technical terminology. However, he promised to be diligent, saying he intended to overcome these weaknesses with intensive language lessons up until the New Year. 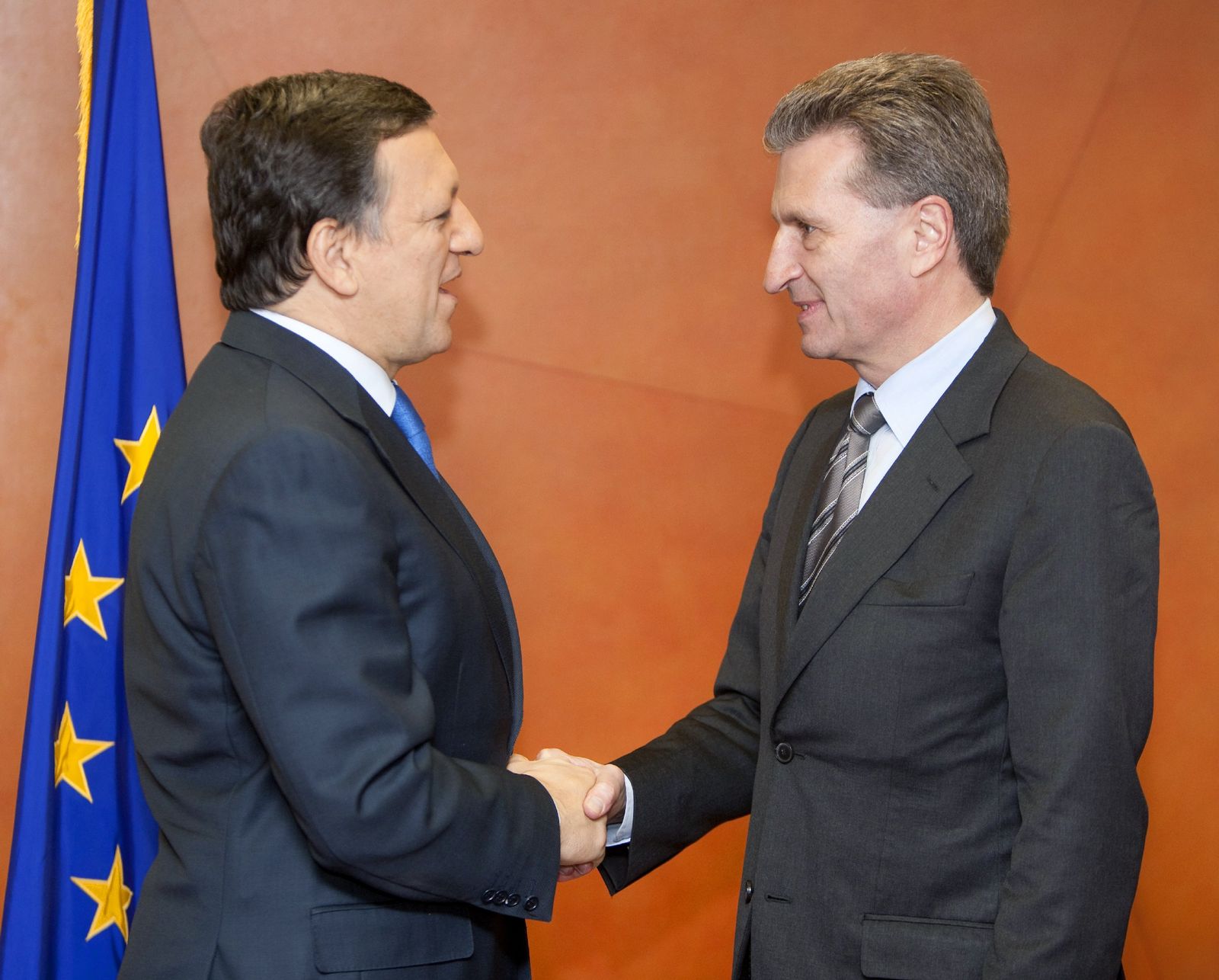