For many years following World War II, German politics was something of a predictable affair. There were basically three parties to choose from: the Christian Democrats (or the Christian Social Union if you lived in Bavaria) on the center right, the Social Democrats on the center left and the Free Democrats for adherents of the free market. The latter played junior coalition partner to whichever of its larger brethren came out on top in elections.

That model, however, began to change with the emergence of the Greens. Indeed, it was seen as a minor revolution in 1998 when a Joschka Fischer-led Green Party helped the Social Democrats into the Chancellery behind Gerhard Schröder.

Since then, the number of parties in the German political landscape has multiplied yet again, with the emergence of the far-left Left Party in the years following Schröder's controversial welfare reforms and the Pirate Party more recently. The result is that every election, both state and national, has become much more difficult to predict. And the possibilities for forming a governing coalition have likewise multiplied.

With the German election approaching this autumn, SPIEGEL ONLINE has put together a brief guide to the country's political parties so you can find your way as the campaign heats up.

The Christian Democratic Union, founded after World War II, is Germany's main conservative party. Five of the eight chancellors who have led the Federal Republic since 1949 have been CDU members. It has its roots in the Center Party, a Catholic political party founded in 1870, and its traditional strongholds are in southwest and western Germany.

CDU Chancellors Konrad Adenauer and Ludwig Erhard presided over West Germany's post-war economic miracle by espousing the principles of the social market economy, which rejects socialism and laissez-faire economics and sees the government's role as providing the framework for fair competition, low unemployment and social welfare.

The party continues to adhere to those principles, which have become the bedrock of Germany's economic system.

As a Protestant woman who grew up in communist East Germany, Chancellor Angela Merkel, 58, is not a typical CDU member. But she has the party firmly in her grip because she is popular and has sidelined every single potential rival since she became CDU leader in 2000. She owes her strong approval ratings to a widespread perception that she has handled the euro crisis well and has shielded German taxpayers from the fallout as effectively as she can. But she also has a knack for avoiding political controversies. Her fence-sitting is legendary in Germany, and while it has brought her accusations of weak leadership, it also often leaves her looking presidential.

The CDU won't be pledging any painful reforms in its election manifesto and is banking on Merkel as its main vote puller. Its message will be continuity with a safe pair of hands. Given that the economy remains sound and unemployment remains low by European standards, the strategy might just work.

The center-left Social Democratic Party is rooted in the 19th century labor movement and is Germany's oldest political party, founded in 1875. It traditionally represents the interests of the working class. Much of its support comes from the large cities of traditionally protestant northern Germany and the former coal-mining and steel producing Ruhr region. Willy Brandt, the SPD's first chancellor, spearheaded West German reconciliation with Eastern Europe and the Soviet Union in the early 1970s. The party has led governing coalitions for 20 of the 60 years of the Federal Republic and governed as junior partner to the conservatives in grand coalitions twice, between 1966 and 1969 and between 2005 and 2009. The SPD suffered a string of regional election defeats and a major decline in membership as a result of radical and deeply unpopular welfare cuts introduced by SPD Chancellor Gerhard Schröder in 2003 and 2004. It served as junior partner to Merkel's conservatives in a grand coalition from 2005 until 2009. Its current chancellor candidate, former Finance Minister Peer Steinbrück, has hurt his election chances with a number of verbal gaffes -- at one point saying chancellors should be paid more money -- which compounded controversy over his income from lucrative speaking engagements at banking and corporate events in recent years. The party is campaigning on a program of greater social justice and a crackdown on banks.

The Free Democratic Party is a pro-business party that promotes the free market economy and individual liberty. Its critics call it the party of the privileged few, an image the party has failed dramatically to dispel in the last four years as junior partner in the center-right coalition with Chancellor Angela Merkel's conservatives. The FDP, riven by infighting, has suffered a string of regional election defeats and an opinion poll slide so dramatic that there is some doubt whether it will even surpass the five-percent threshold needed to get back into parliament. Its current leader, Vietnamese-born Philipp Rösler, has survived repeated attempts to unseat him. Founded in 1948, the FDP has been "kingmaker" to both the SPD and the CDU, serving as junior partner in coalitions with them, and it has participated in the federal government for a total of 45 years, more than any other party.

Germany's Green Party formed in the 1970s around a platform of pacifism and environmental activism. It won its first parliamentary seats in 1983 after gaining 5.6 percent of the vote in the federal election that year. The party joined the federal government for the first time in 1998 in a coalition with the Social Democrats. It abandoned its strict pacifist principles under Green Foreign Minister and Deputy Chancellor Joschka Fischer, who persuaded the party to back Germany's participation in the NATO bombing of Kosovo in 1999. It also supported the US-led attack on Afghanistan in 2001. While in government with the SPD, it pushed through the nuclear power phase-out and enacted laws easing immigration and same-sex civil partnerships. The party's main following comes from higher income households in urban areas. It has scored some major successes in regional elections in recent years, getting its first ever state governor, Winfried Kretschmann, in 2011 in an election in the conservative bastion of Baden-Würrtemberg, one of Germany's richest states.

The party is the result of a merger in 2007 of the Party of Democratic Socialism (PDS) -- the successor to the communist party that ruled East Germany -- and WASG, a group of trade unionists and disgruntled former SPD members based in western Germany. It managed to attract left-wing voters disenchanted with the SPD after radical welfare cuts enacted by SPD Chancellor Gerhard Schröder in 2003 and 2004. At first, the newly-merged party managed to establish itself in a number of western state parliaments. But its fortunes have since waned and it has been evicted from parliaments in recent elections in Lower Saxony, North Rhine-Westphalia and Schleswig-Holstein over the last year. It remains a strong political force in eastern Germany, however, and is in government as junior partner in the state of Brandenburg. It is the fourth-strongest party in the Bundestag lower house of parliament, with 76 seats. It pursues a strict pacifist stance, for example demanding an immediate withdrawal of German troops from Afghanistan and would like to see the dissolution of NATO.

The staunchly conservative, largely Catholic Christian Social Union (CSU) is an anomaly in the German political system in that it is the only national political party that is actually a state party. Though the CSU, which is the sister party to Angela Merkel's CDU, shares power with the chancellor's party at the national level -- indeed CSU members run three ministries in her cabinet -- it is actually based in the southern state of Bavaria. The party was founded in 1945 and currently governs together with the Free Democrats in Bavaria. It has governed in the state every year since 1949, with the exception of 1950 to 1953. In 2002, then Bavarian Governor Edmund Stoiber ran as the joint CDU-CSU candidate for chancellor, but so far the party has not yet been at the helm of the Chancellery. The CSU and the CDU may be sister parties, but they do not march in lock step and are often at odds on political issues. CSU leader Horst Seehofer, the governor of Bavaria, is frequently a thorn in Merkel's side because he is prone to bouts of populism. He recently pushed the government into adopting a deeply controversial childcare allowance for stay-at-home mothers. Leading CSU members last year sought to boost their popularity ratings by criticizing fresh support for Greece. The CSU is also deeply opposed to extending marriage benefits to same-sex couples, for which some in the CDU have recently voiced support.

The German Pirates, inspired by the Swedish Pirate Party set up in 2006, stunned Germany -- and themselves -- when they entered their first state parliament in September 2011, by winning a whopping 8.9 percent of the vote in the Berlin city-state election. Representing the new generation of people who grew up with the Internet, the motley collection of Web-freedom campaigners looked set to shake up Germany's staid political scene and do for the Internet what the Greens had done for environmentalism back in the 1970s. They went on to score more election successes early last year in Saarland, Schleswig-Holstein and North Rhine-Westphalia, Germany's most populous state. But the swift, easy victories appear to have gone to their heads, and were followed by highly-public internal power struggles which turned off voters in droves. At present the Pirates are polling at just 2 percent in nationwide voter surveys -- and are in serious danger of disappearing from Germany's political scene as quickly as they emerged.

Alternative for Germany (in German: Alternative für Deutschland -- AfD) is the newest party in Germany's political landscape. Officially founded on April 14, 2013, it is thus far largely a single-issue party: It wants to do away with the euro, or at least get Germany to back out of the European common currency zone.

The party is led by Bernd Lucke, 50, a professor of macroeconomics at the University of Hamburg, whose background is typical for the party's founding members. Rather than a party of dissatisfied cranks, it has become a collection of (mostly male) well-off professionals and economic experts who are opposed to ongoing efforts to prop up the euro with taxpayer money.

The AfD hopes to capitalize on widespread disillusionment in Germany with the euro and the numerous bailout packages the crisis has triggered. While most Germans continue to support the common currency, a significant minority, many of them from the conservative side of the political spectrum, would like to see its dissolution. Several parliamentarians belonging to Chancellor Angela Merkel's center-right governing coalition have even proven unwilling to support bailout packages for struggling Southern European euro-zone member-states in the recent past.

Whether the AfD can attract significant amounts of support remains to be seen. But many could come to view it as a viable alternative to the conservative Christian Democratic Union, which has moved to the center under Merkel in recent years. Even if the party fails to surpass the 5 percent hurdle necessary for representation in German parliament, it could siphon off enough voters from Merkel's coalition to endanger her re-election.

Color used to represent party: None yet 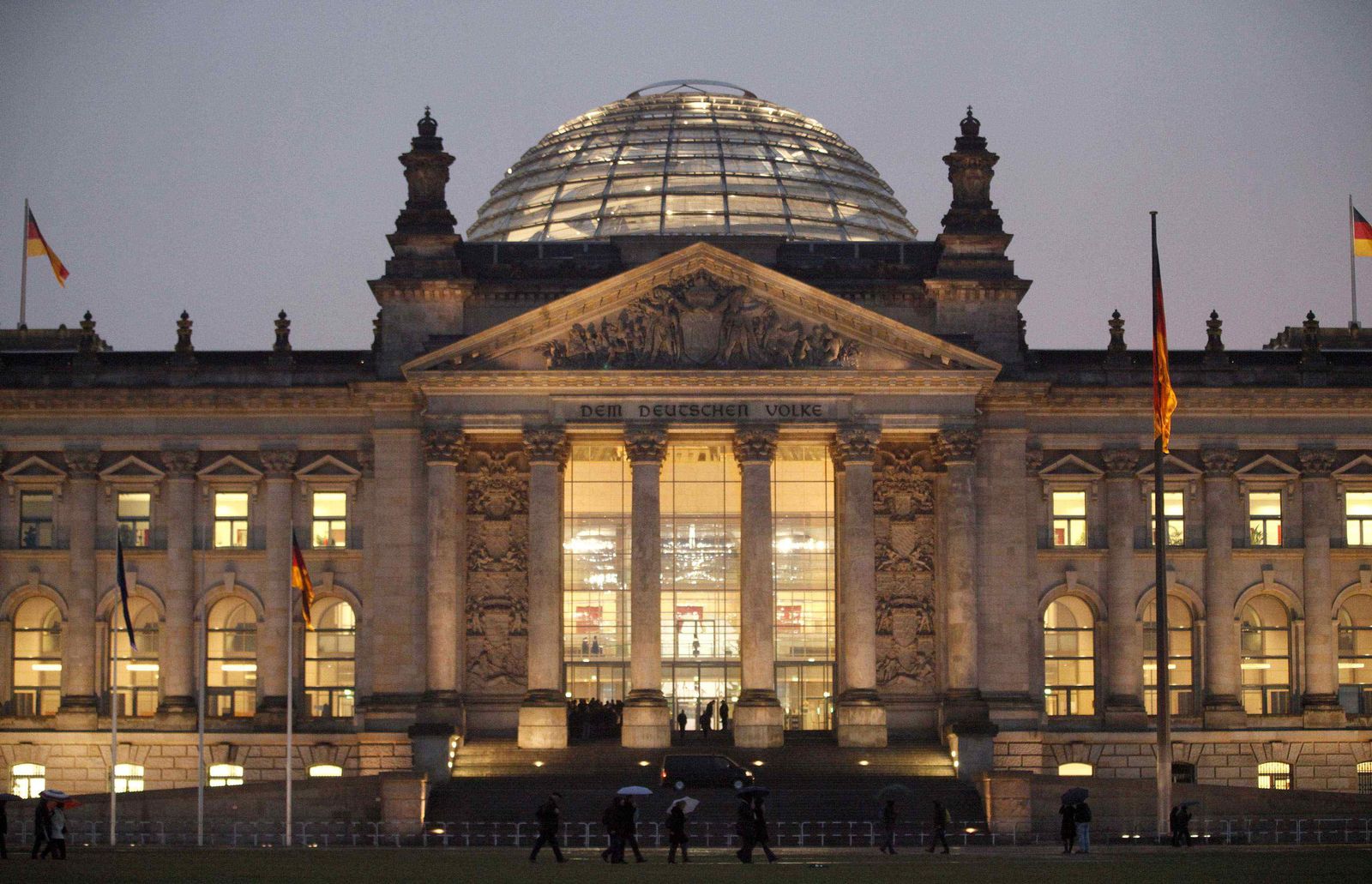