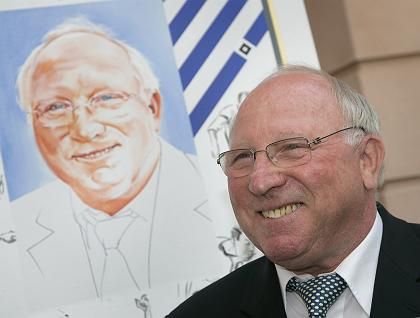 Uwe Seeler, one of the world's most gifted football strikers in the 1960s and 1970s, celebrates his entry into Germany's sporting Hall of Fame.

Germany inaugurated a Hall of Fame for its sporting legends on Tuesday in a ceremony marred by criticism that some of the 40 athletes selected were members of the Nazi Party.

World Cup winner Franz Beckenbauer has made it into the "Hall of Fame," along with boxing legend Max Schmeling, skiing champion Rosi Mittermeier and football ace Uwe Seeler.

Part of the aim in honoring role models is to encourage young people to take up sport, especially in light of doping scandals that have tainted professional sports in recent years.

But some German commentators have already labelled it a "Hall of Shame" and criticized the jury, made up of sports officials and journalists and headed by Interior Minister Wolfgang Schäuble, for choosing five sportsmen who were Nazi Party members.

Those include cyclist Gustav Kilian and footballer Sepp Herberger, who managed the West German national team that won the 1954 World Cup in Switzerland.

But Deutsche Sporthilfe, the foundation that promotes German athletes and set up the Hall of Fame, rejected the criticism. "Sport is no better than society," Sporthilfe's spokesman Hans-Joachim Elz told SPIEGEL ONLINE. "We can't confirm the list contains five Nazi party members. Besides, these people led a life after the Nazi era and in some cases went on to receive merit awards for their contributions to society."

Hans Wilhelm Gäb, chairman of Deutsche Sporthilfe's supervisory board, told the inaugural ceremony in Berlin's German Historical Museum: "We were aware from the start of the problem of choosing top athletes who were associated with and used by the Nazi regime."

"But if we had automatically excluded all the athletes who were successful at that time and who inevitably came into contact with the Nazi system, or if we had only honored resistance fighters, such a blanket judgment would have been self-righteous. It would have been tainted by the arrogance of a generation that was fortunate enough to have grown up in a democracy."

There will be no physical Hall of Fame in which fans could honor their heroes. Instead, a book containing biographies of the athletes will be published later this year and a travelling exhibition will be launched in 2009.

Only eight of the athletes in the Hall of Fame are still alive. The organizers wanted to focus initially on historical sporting greats of the 20th century. "We didn't want to start with a list of 80 names," said Gäb.

That may explain the surprising omission so far of seven-times Formula One world champion Michael Schumacher and of tennis star Boris Becker, who won Wimbledon three times in the 1980s. They might however be among three further sports personalities who will be added to the list on May 31. Three new names will be chosen each year from then on.

The Hall of Fame also includes two victims of the Nazis. The first is cycling champion Albert Richter, who angered the regime by refusing to wear the swastika on his shirt at sporting competitions and who is believed to have been murdered by the Gestapo secret police in 1939 while trying to leave Germany.

The second is wrestler Werner Seelenbinder, who came fourth in the Berlin Olympics in 1936, was executed in prison in 1944 for his links with the communist resistance against Hitler.

The contrasting lives of the 40 athletes reflect the "chasms and contradictions of German history," said Thomas Mergel, professor of European 20th century history at Berlin's Humboldt University, speaking at the ceremony. "But the selection shows the desire not to remember one thing and forget the other."

The jury is also under fire for choosing only three women, the best known being Rosemarie Mittermaier, a former West German Alpine skiing champion.

It selected only one sportsman from the former East Germany -- Olympic swimmer Roland Matthes. Commentators said that was a reflection of how athletics under the communist regime was blighted by the state-run doping program that enabled the small country of 17 million to come second in international medals tables in three out of four Olympic Games between 1972 and 1988.

However, Elz at Deutsche Sporthilfe said East German doping had nothing to do with it. "We wanted to focus mainly on posthumous mentions initially," he said. "And all the big East German athletes are still alive."

Doping has recently claimed the reputations of a number of German cycling champions including Jan Ullrich, who won the Tour de France in 1997 and who has been engulfed in the doping scandal that has beset international professional cycling.