There are days in life that will always remain unforgettably vivid, like an endless yesterday. For Nelli R., one such day is Oct. 9, 2019. "It was unbelievable," says the 21-year-old (who prefers that her last name not be used for fear of being targeted). Sitting on a folding chair in the prayer room of the Halle synagogue, where she narrowly escaped death three months ago, the student says she constantly feels like she is under threat.

The bullet holes are still visible in the wooden door leading to the synagogue's front courtyard. Around noon, Nelli R. was celebrating Yom Kippur together with 50 other Jews when a heavily armed right-wing terrorist, Stephan Balliet, tried and failed to shoot open the door.

Nelli R. and the others barricaded themselves inside, several of them watching on a surveillance camera as the perpetrator shot a passerby. By the time the police arrived, the shooter had already fled. He killed another person not long later.

Following the attack, German security officials were criticized for not providing security for the synagogue on the most important day in the Jewish calendar. Now, the street on which the synagogue is located is classified as a high-security zone, with police officers coming and going. They have set up headquarters in a container.

But behind the wooden door, a kind of everyday life is slowly returning. The religious rituals, services and prayer times are giving support to the members of the congregation, even if some of the attack's survivors remain traumatized and still startle whenever they hear a siren. The congregation's leadership has made psychological counselling available.

"I haven't felt like I've needed help thus far," says Nelli R. "But it is good to know that it's available." She says she has been reading up on the perpetrator's biography. "I read that he went to university," she says. "What happened in his life? What did he come into contact with?" She says she didn't find any answers to those questions.

Nelli R. says her relationship with her identity has changed since the attack. Previously, she says, she always took "a certain amount of care" in walking through the city as a Jew. At school, she never made her faith visible, adding that classmates in Halle made jokes about Jews in the schoolyard, and that this continued at university. "When someone asks about my faith, I tell the truth. But I don't say anything of my own accord."

Many members of the Halle congregation are similarly discreet. One of them hides all indications of Jewishness in his home the day before the meter reader comes. Others don't want to any birthday cards with the congregation's stamp sent to their homes, for fear that the postman will discover they are Jewish.

A Need for Reciprocity

The fear is justified. Hatred against Jews is part of everyday life in Germany and there have been numerous anti-Semitic attacks on streets, in schools or in subway stations. In 2018, the police registered 1,799 such crimes. "For countless Jews in Germany, the attack in Halle was no surprise, no turning point, but rather much more of a confirmation of their latent feelings of insecurity," Heidelberg Jewish studies professor Frederek Musall says. Musall, himself a member of the Jewish faith.

After Halle, there was a broad discussion of how to protect Jewish establishments. The Federal-State Commission on Anti-Semitism has called for the installation of bullet-proof glass in congregation buildings and synagogues, among other construction measures. "Security is important, but it is not the biggest problem," Musall says. He says that many of German Jews yearn for normalcy, which requires more social sensitization.

"When most people think of Jews, they think of sidelocks, Israel or the Shoah," says Musall. He says there is a desperate need for better understanding and for new ideas to bring schoolchildren and other Germans in contact with their Jewish compatriots. He argues that this can't just come from politicians and that it requires the social engagement of everyday people.

In Halle, the Jewish community is largely isolated, and the average age of its members is over 60. Most of them are post-Cold War immigrants from the Soviet Union and the main language in the religious services is Russian. "There is a very passive relationship between the Jewish community and the city," says Igor Matviyets, a young SPD politician who is a member of the congregation. "This parallel existence is largely reciprocal. The attack hasn't changed that."

One potential avenue for greater interaction takes place once a year, the Jewish Culture Days, which includes lectures, readings and movies. The event took place in November for the seventh time, just a few weeks after the attack. Tours through the synagogue where the attack took place proved especially popular.

For Nelli R., who is studying economics at university, the Culture Days were also important because they kept her busy. "When you're busy, you don't have the time to confront what you actually went through," she says. She came to the eastern German state of Saxony-Anhalt as a small child with her family. She says her parents had been unable to observe their faith within the Soviet Union, but had been able to preserve knowledge of it despite the communist dictatorship.

Nelli R. says she grew up like any other girl, and that when one of her classmates actually did find out about her faith, he was quite surprised. "Nobody has an image, nobody has a concept of Jews. They are not known."

She says she only articulated her Jewish identity within the family and at celebrations and meetings within the congregation. Together with friends from the synagogue, she participated in Jewrovision, a competition similar to Eurovision in which over 60 Jewish congregations and youth centers in Germany take part.

The attack has brought the Jews of Halle even closer together and shortly after the killings, they tried to simply continue on as before. One and a half weeks after the attack, on October 20, they celebrated Sukkot, a holiday sometimes known as the Feast of Tabernacles that involves the construction of a kind of booth or pavilion. Everything had been prepared for the children that day - flatbread and hummus, fresh vegetables, grilled meat. The booth had been set up in the front courtyard in which an elderly man played pop songs on an accordion and sang verses from the Torah.

It was a lively day, with running children and a cheerful atmosphere. While the flowers and candles were still accumulating in front of the locked door of the synagogue, and emotional visitors spent minutes reflecting in front of it, the congregation inside had returned to normality, at least for the moment.

That is in part thanks to the work of Chairman Max Privorozki, a man with an impulsive disposition who is simultaneously gruff and cordial. Over the past few months, Privorozki has been working almost day and night in his office in the first floor of the synagogue -- a small back room with a table and a huge flatscreen television -- answering correspondence and requests.

The article you are reading originally appeared in German in issue 02/2020 (January 3rd, 2020) of DER SPIEGEL.

Privorozki led German President Frank-Walter Steinmeier on a tour of the synagogue and also hosted U.S. Secretary of State Mike Pompeo. He says the response from most Germans had bolstered his confidence. "The reaction of the absolute majority has awoken my hope that the situation is not as pessimistic as I had thought several months ago." For quite some time, he has been fighting against the desecration of Jewish graves and against anti-Semitic graffiti.

Privorozki was born in 1963 in Kyiv and moved to Germany from the disintegrating Soviet Union 30 years ago. He took over the leadership of the congregation in 1999.

In his view, politicians should get more involved in efforts to improve Jewish life in Halle and the rest of Germany, and it makes him furious, when an arson attack on a synagogue is deemed by a German court to be a protest action against Israel instead of an anti-Semitic act - as the Düsseldorf Higher Regional Court decided in 2017.

It wasn't until after the attack in Halle that the German Ministry of Justice proposed a law that would punish anti-Semitic crimes more harshly in the future.

"The further one gets from the Nazi period, the more history fades," says Nelli R. The young woman looks to the entrance door of the synagogue. A security guard stands watch in a small anteroom.

"The attack has confirmed to me that there is a rightward shift taking place in Germany," Nelli R. ultimately says. "Even after the Holocaust, the hatred against Jews is still here." 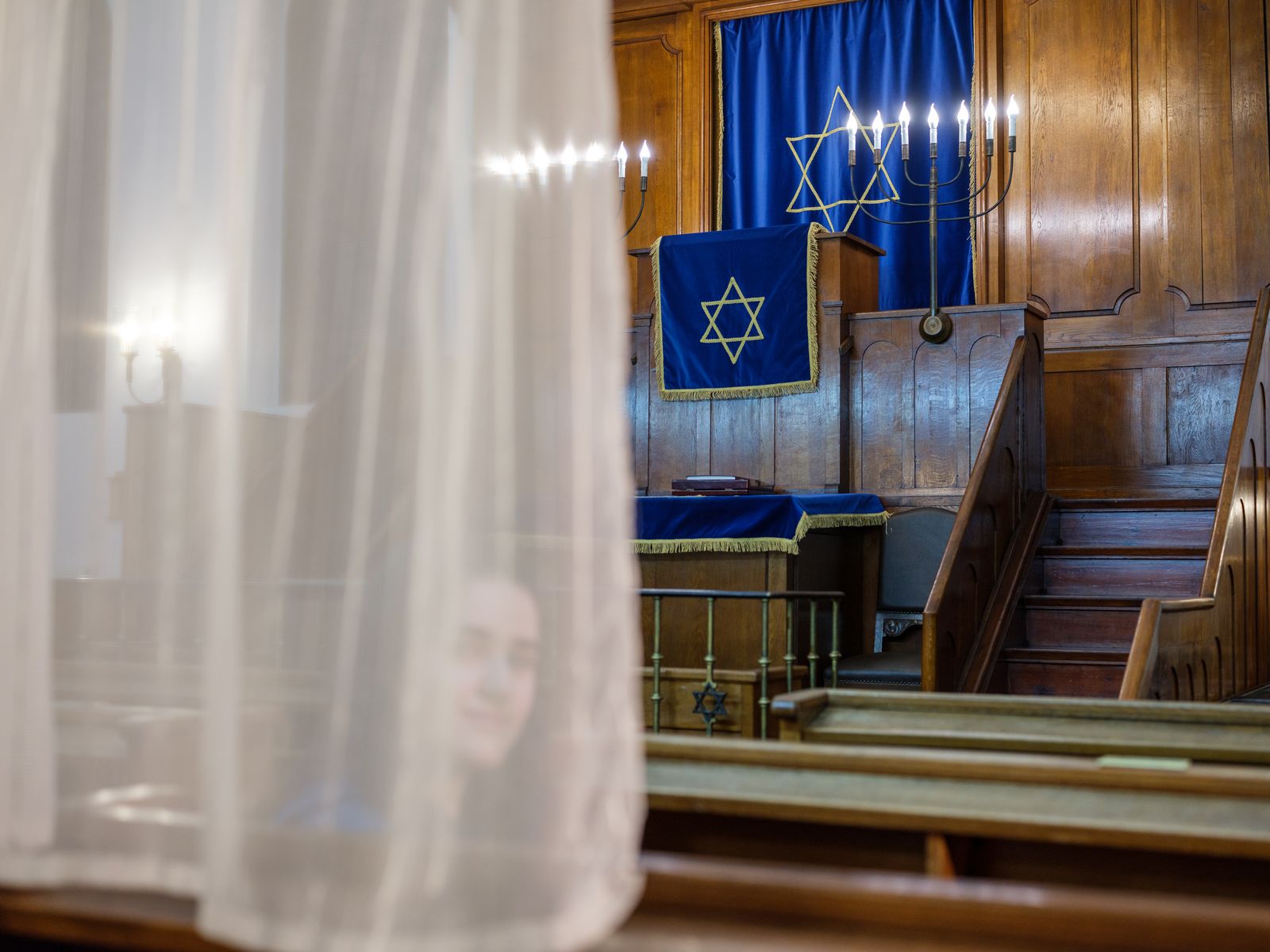 Nelli R. in the synagogue in Halle 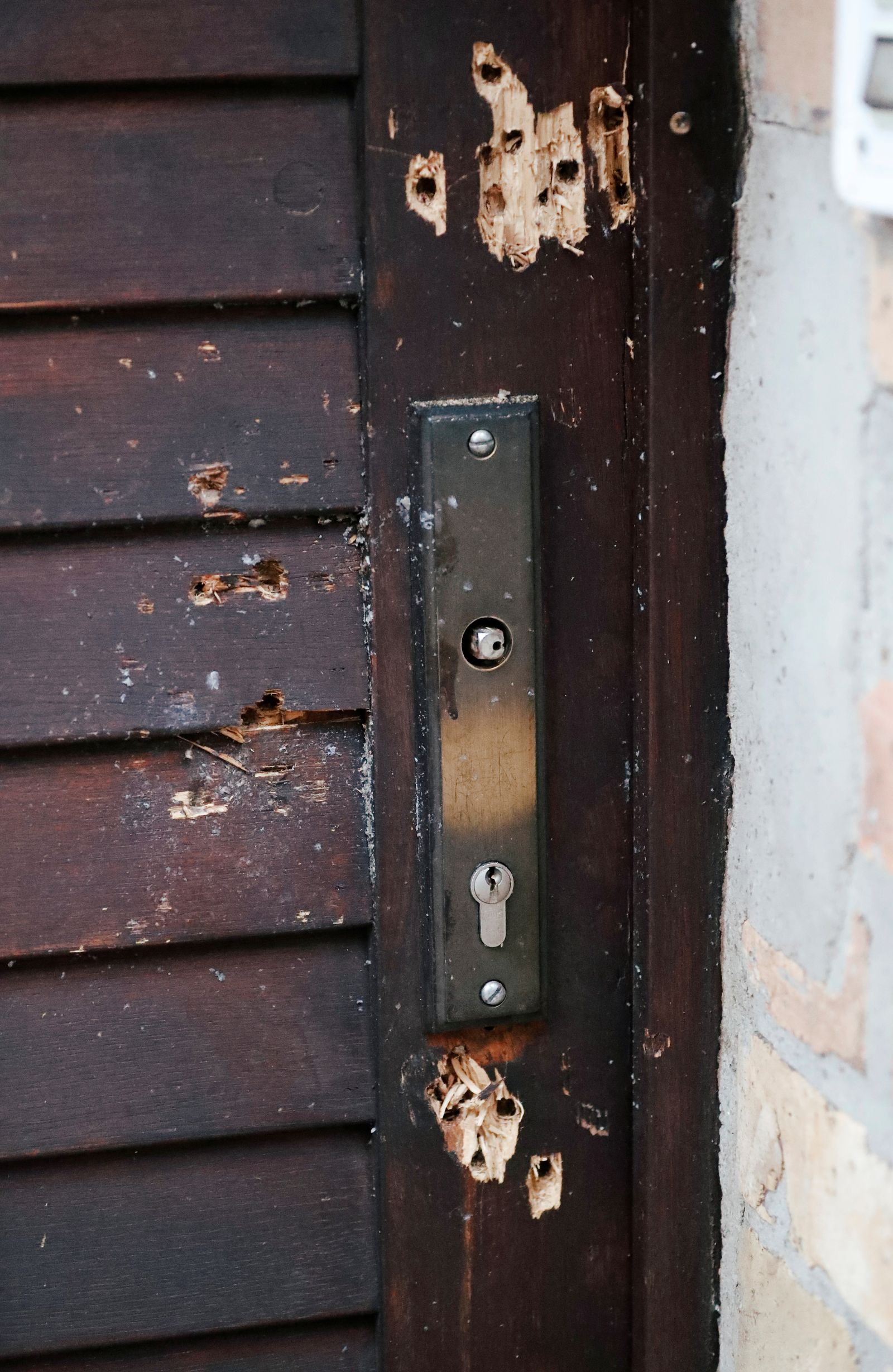 Bullet holes in the door of the synagogue in Halle