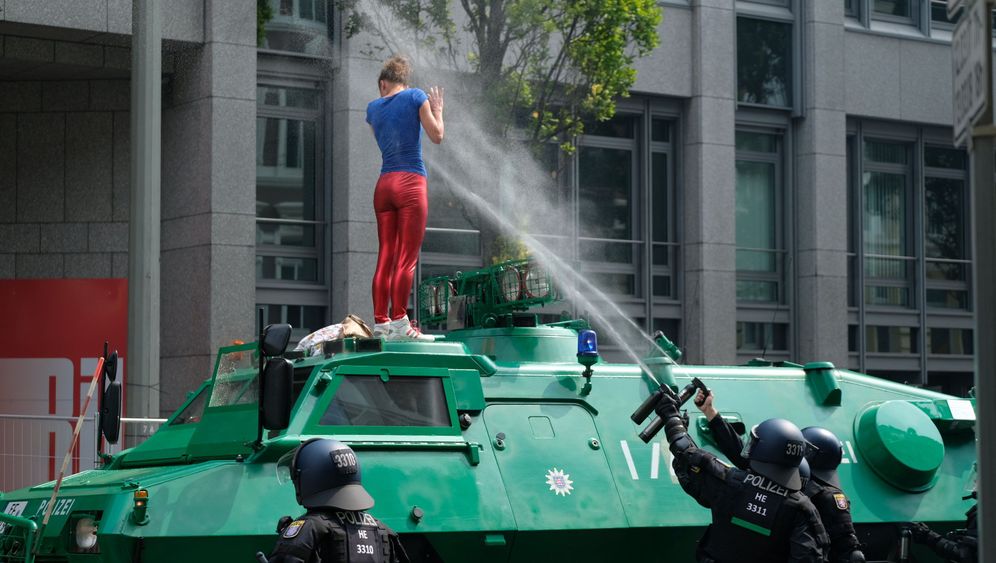 Hartmut Dudde was as good as his word. The chief in charge of the police operation at the Hamburg G-20, with some 15,000 officers at his disposal, had promised a rigorous approach to criminal demonstrators during the summit - and his men certainly delivered that on Thursday evening against the "Welcome to Hell" demo.

An escalation was virtually pre-ordained - from both sides. The organizers told the police in advance that the demo would remain peaceful as long as officers ignored the odd mask or firework. The fact that that it was impossible for the police to meet this condition seemed of no concern to them.

For their part, the police deployed such a massive force to surround the demo's starting point at Hamburg's Fischmarkt square that it was almost impossible to count the number of water cannon and reinforcement units stationed in the surrounding streets.

Masks against a martial force

Many G-20 protesters saw the massive police presence as a sign that officials didn't want the march to go ahead at all. The much-feared "black bloc" of leftist radicals appeared remarkably restrained at first - apart from the forbidden masks many were wearing. There were no fireworks, no flares. But police blocked the black bloc-led march after only a few hundred meters along Hafenstrasse, which runs along the Elbe River. Many of the 10,000 demonstrators were still at the Fischmarkt, waiting to begin walking.

The police were within their rights to demand that demonstrators take off any face coverings before the march would be allowed to continue. And many did in fact follow the instruction - but not all, at which point it became clear that a lot of people had come to riot, as the rest of the evening and Friday morning showed.

But at that moment, shortly before 8 p.m. on Thursday evening, the radical leftists almost seemed willing to compromise. Not a single masked face could be seen at the front of the march. That could have been the moment when the police let the demo pass - even though not all the faces had been uncovered.

Timo Zill, spokesman for the Hamburg police, afterwards called it an "uncontrollable security situation." There were 3,500 extremists present who had previously announced an intention to commit serious crimes. he said. If their faces were covered, the state had a duty to intervene, he said. "You can't expect the police to walk alongside these people into a residential area - that would be irresponsible," Zill added.

The situation duly escalated throughout the night. Three water cannon vehicles had been stationed to block the demonstrators' path - Hafenstrasse is narrow at this point, despite its four lanes, which meant it was apparently impossible for the vehicles to turn around. If the demo had been allowed to go ahead, these armored cars would have had to reverse several hundred meters ahead of it.

But it didn't come to that. Instead, officers stormed the black bloc from the rear in order to surround them. The police said the intention was to separate the violent demonstrators from the peaceful ones. But before that could happen, radicals were able to flee over a wall to an adjacent walkway alongside the river. The police used pepper-spray on the street below, bottles were thrown, fireworks fired. Then the police pointed their water cannon at the walkway, and officers followed up.

On the wall, essentially a flood barrier with a width of just a couple meters, panic ensued - one which could easily have led to serious injury. The fact that it didn't has nothing to do with any action taken by the police. It was, rather, pure luck. Then, groups of police officers began storming into the crowds on the Fischmarkt square, apparently indiscriminately; there was no obvious purpose to their violent behavior. Later, too, it proved difficult for protesters to follow police instructions, not least because it was virtually impossible to understand the commands coming from their loudspeakers.

The rushing of the walkway wasn't just chaotic and dangerous, it also sent the completely wrong message. Hundreds of peaceful demonstrators found themselves confronted by a police force right out of left-wing radical propaganda. Only the older among them could still recall the violent police operations against protests in 1970s West Germany.

Following the aggressive police operation, the organizer of the "Welcome to Hell" demonstration declared it to be over. But demonstrations continued nonetheless. Shortly thereafter, G-20 opponents registered numerous spontaneous protests - along the same route that the "Welcome to Hell" demonstration was to follow. Ultimately, thousands began marching - peacefully at first - through the St. Pauli quarter of Hamburg. But members of the black bloc began joining them.

Riot police began closing in on the demonstration from almost every side street. As darkness began to fall, the protest became more aggressive - as did the police, with pepper spray, truncheons and screaming.

Many of the police officers on hand hardly knew their way around the city. Support was brought in for the G-20 from across Germany, even as far away as Bavaria, and groups of riot police would often run 300 meters in one direction before turning around and running 500 in the other. Long lines of police vans likewise drove aimlessly about. The "dynamic situation," as police jargon would have it, clearly led the officers to react more frantically - not to mention their need to dodge bottles and rocks thrown by protesters. In the area surrounding the Rote Flora leftist cultural center, something of an anti-G-20 headquarters this weekend, police repeatedly and violently pulled people out of the crowd. There were several injuries on both sides.

In the end, the streets of St. Pauli were covered with shattered glass. And in the end, there was no winner. But a lot of losers.