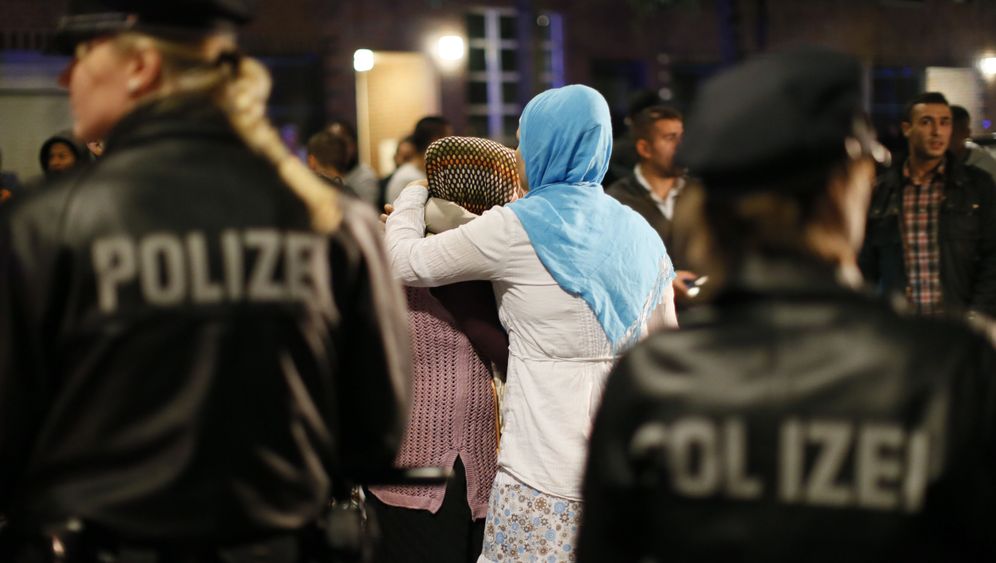 The area that is supposedly Germany's newest problem neighborhood encompasses only a few city blocks. Families, students and blue-collar workers live there. The Hamburg police union, however, describes these streets in the old center of the Altona district as a "stomping ground" for dangerous elements and is warning that it could become the scene of riots, much like some of the outlying districts of Stockholm, London and Paris.

On an evening in August, Ahmad and several other young men sit on wooden benches in front of the Azra kiosk on Holstenstrasse. Ahmad's parents emigrated from Morocco. His friends' parents and grandparents came to Germany from Iran, Turkey and the former Yugoslavia. The young men are eating French fries and chocolate ice cream as they talk about the past week in their neighborhood.

They don't understand why they are constantly being stopped by the police, sometimes up to four times a day, outside their apartment buildings, in front of the kiosk and in the park. Between July 8 and 15, the police conducted eight "focused operations" in the neighborhood, involving a total of 443 officers. While Wolfgang Brand of the Hamburg police department admits that crime rates haven't increased in the district in the last few years, he also points out that individual youths have committed crimes, including robbing pedestrians, selling drugs and threatening police officers.

Ahmad, 18, was born and raised in Altona. He attends a high school specializing in economics and business management and coaches a youth football team. He too has been stopped by the police several times and asked for identification. Ahmad says that he is ashamed to face his team. "The officers make us out to be criminals, even though they have no evidence that we have done anything wrong."

The conflict came to a head in mid-July, when parents and other residents took to the streets in a show of solidarity with the young people. The police used pepper spray and batons on the protesters. A few days later, about 1,000 people staged a demonstration in Hamburg to protest racially motivated police checks.

Vassilis Tsianos, a sociologist at the University of Hamburg, describes the law enforcement actions in Altona as a "classic example of racial and ethnic profiling," because "the police targeted people there solely on the basis of their appearance." According to Tsianos, prejudice against immigrants is firmly entrenched among the police and in society, and anyone who doesn't look like the average German is quickly suspected of involvement in criminal activity. The police deny the allegations. According to officer Brand, there was a reason for each of the security checks.

In 2012, about a third of suspects in Hamburg were foreigners, who make up only 12.9 percent of the population. This could influence the attitudes of police officers, even though the official position is that crime rates among German and foreign-born citizens are not comparable, because of significant differences in age and social structures.

Racial profiling, or subjecting people to excessive scrutiny on the basis of external features like skin and hair color, is a violation of the ban on discrimination enshrined in the German constitution. It contributes to growing racism, warns the United Nations Human Rights Committee. In the United States, a federal judge recently criticized the New York Police Department's controversial "stop and frisk" program, which primarily affected non-whites, even when their behavior had not given officers any reason to suspect them of wrongdoing.

The German government claims that racial profiling is not practiced in Germany. But a study by the German Institute for Human Rights, established in 2001 on the recommendation of the German parliament, the Bundestag, concludes that racial profiling is in fact an "established practice" in police work. And it is not just a matter of the misconduct of individual officers, says study author Hendrik Cremer.

He is especially critical of a provision of Germany's Federal Police Act, under which the federal police can demand identification from individuals on trains, in train stations and at airports, without cause, so as to prevent illegal entry into the country. The officers are expected to model their behavior on "border police experiences." Cremer says that the standard is "geared toward discrimination," because the police inevitable target people with dark skin. According to a study by the European Union Agency for Fundamental Rights, in Germany citizens with foreign backgrounds are subjected to security checks at a significantly higher rate than others.

In 2010, a dark-skinned architecture student was on a train bound for the western city of Offenbach am Main, where he planned to visit his parents, when police officers asked him for identification. The student refused to show them his passport. The officers then pulled him off the train, dragged him to the police station and asked him whether he had stolen the bar of chocolate they had found in his backpack. Later, one of the officers admitted that they had checked the student because of his skin color. The man sued the officers, and in October 2012, the Higher Administrative Court of the state of Rhineland-Palatinate ruled in his favor.

Last month, a committee of German lawmakers across the political spectrum released their long-awaited report on a series of right-wing murders that has been the subject of Germany's biggest trial in decades. In their attempt to explain how members of the National Socialist Underground (NSU) neo-Nazi cell were able to commit dozens of crimes without arousing the suspicion of law enforcement, the politicians stopped short of explicitly blaming institutionalized racism within the police or government agencies. They did, however, state that "German society is diverse … this diversity should be reflected by the police authorities, who must also be able to competently deal with this diversity."

And though neither Merkel's conservative Christian Democrats, her government's junior coalition partner, the Free Democratic Party, nor the Green Party have acknowledged the practice of racial profiling, the opposition SPD and Left Party both commented extensively on the phenomenon -- at least as it pertains to the NSU investigation.

The Initiative for Black People in Germany has submitted a petition to the Bundestag calling for the abolition of police security checks when there is no suspicion of a crime having been committed. "There are serious consequences to social coexistence in Germany when the police checks people because of their skin color," says Christine Lüders, director of the Federal Anti-Discrimination Agency. The police department in the northern city of Bremen offers its officers courses in the treatment of minorities. The ombudswoman for the families of victims of terrorist attacks by the NSU neo-Nazi cell, Barbara John, has called for the establishment of an independent complaints office for police misconduct.

Ahmad, the high-school student from Altona, says that he finds it difficult to trust the government anymore, and that he becomes anxious when he's on his way to school and finds that he's forgotten his identification card. He now believes that the city is trying to force him and his family out of the neighborhood, so that the apartments there can be rented to higher-income residents.

Ahmad and his friends often sit in front of the Azra kiosk for hours. It's the only place in the neighborhood where they can spend time outside anymore. The site of a former playing field is now a swimming pool, where the price of admission is €6 ($7.80) for an hour and a half. Of course there are criminals in the neighborhood, says Ahmad. But, he adds, he doesn't understand why an entire group of people should be treated with suspicion as a result. One of his friends points to his black hair and dark skin, and says: "As long as we look like this, we will always be potential criminals."