When Julian Assange meets with visitors in his temporary home in the Ecuadorian Embassy in London, he likes to direct the conversation to a topic that worries him: the precarious finances of the whistle-blowing website he founded. That was apparently the case when fashion designer Vivienne Westwood recently showed up at the embassy with a bottle of wine. Earlier this month, the 71-year-old began selling €55 ($71) T-shirts on her website featuring the words "I'm Julian Assange." She promises that the proceeds will go to WikiLeaks, and says that Assange is "a real hero."

However, the financial future of the website is more likely to be determined by news Assange received from Germany the week before last, news that has received little coverage in the international press: As of Oct. 25, the Hamburg Tax Office retroactively revoked the non-profit status of the Wau Holland Foundation (WHS), the organization that handles and transfers donations to WikiLeaks from Germany. The foundation is named after the co-founder of Germany's famed Chaos Computer Club, a hacker organization with a strong international reputation.

A Blow to Funding

The decision applies specifically to the year 2010 and means that WHS no longer enjoys a tax-exempt status for that period. In other words, the decision applies to the year in which WikiLeaks published a large number of classified documents, primarily from the United States government, and took in more donations than ever before. With its decision, the Hamburg Tax Office has struck a blow to the most important source of funding still available to the website. The Germans have always been "one of the most generous groups in terms of donations to WikiLeaks," says Assange. The money, he adds, is the "lifeblood of WikiLeaks."

American companies like PayPal and credit-card providers MasterCard and Visa terminated their services to WikiLeaks only days after the publication of the first diplomatic cables from US embassies -- without consulting WikiLeaks, and likely out of preemptive obedience to government orders, as a remark by a PayPal executive suggests. Assange likes to point out that the "financial blockade," which has now been going on for two years, has potentially cost WikiLeaks millions in revenues from donations.

This month's decision in Hamburg doesn't just strike a blow to WikiLeaks, but also to the foundation itself, its other projects and its donors. It means that all donors who remitted money to WHS in 2010, be it for the Tor anonymity project, the development of a hacker archive or WikiLeaks itself, can not deduct the donations on their tax returns.

The decision is "part of the bigger economic blockade against WikiLeaks," Assange believes. WHS board member Bernd Fix is also convinced that the decision, which had its beginnings in the western German state of Hesse, is "clearly politically motivated." This is extremely harmful to the foundation, Fix adds. "The damage to our reputation is our biggest problem." He reports that more than 100 donors have already complained about not having received charitable donation receipts.

His suspicions have to do with the timing of the authorities' heightened scrutiny of the foundation. It began in December 2010, a few days after the publication of the embassy cables, which SPIEGEL also participated in.

At the time, donations suddenly increased dramatically. In December alone, says Fix, about €500,000 in donations were received for WikiLeaks, while total payments received for what the foundation calls "WHS Project 04" amounted to €1.33 million in 2010.

From the standpoint of the United States, the small German foundation, which at the time was based in the central German city of Kassel in the state of Hesse, had become a big problem -- a bubbling source of funding for the new public enemy and the "most dangerous man in the world," as Assange was suddenly being called in Washington.

No Friendlier Treatment in Hamburg

At about the same time, the Kassel Tax Office voiced its first doubts about the non-profit status of the foundation, which had taken up the cause of promoting the freedom of information, among other goals. According to internal documents, in January 2011, officials working for Hesse Interior Minister Boris Rhein, a member of the conservative Christian Democratic Union (CDU), even tried to convince the state agency that regulates non-profits to launch an investigation against WHS. They argued that it was "incomprehensible" as to how "the foundation's purpose of promoting worldwide communication, freedom of information and civil courage" was being fulfilled by its activities. But the state regulators weren't interested, saying that WHS's support of WikiLeaks was "covered by its foundation purpose."

WHS reacted by moving to Hamburg. It also filed a complaint against the revocation of its non-profit status. But the Hamburg Tax Office has now rejected that complaint. According to the tax office, the reasons for its decision expressly have to do with "the forwarding of donations to WikiLeaks and/or to the individuals behind the organization." As a result, the tax office argued, WHS "did not satisfy the condition for the direct pursuit of tax-advantaged purposes."

The Hamburg Tax Office's decision against WHS affects not only the most important, but also the most open source of funding for the organization. Its latest report illustrates WikiLeaks' current financial plight: In the first half of 2012, donations of about €33,000 were more than offset by spending in excess of €246,000.

The foundation could appeal the decision, but after meeting with the tax office it has decided not to do so. "Our goal at the moment is to avoid a legal battle that could go on for years, and to regain our non-profit status so that we can become fully functional again," says foundation board member Fix. 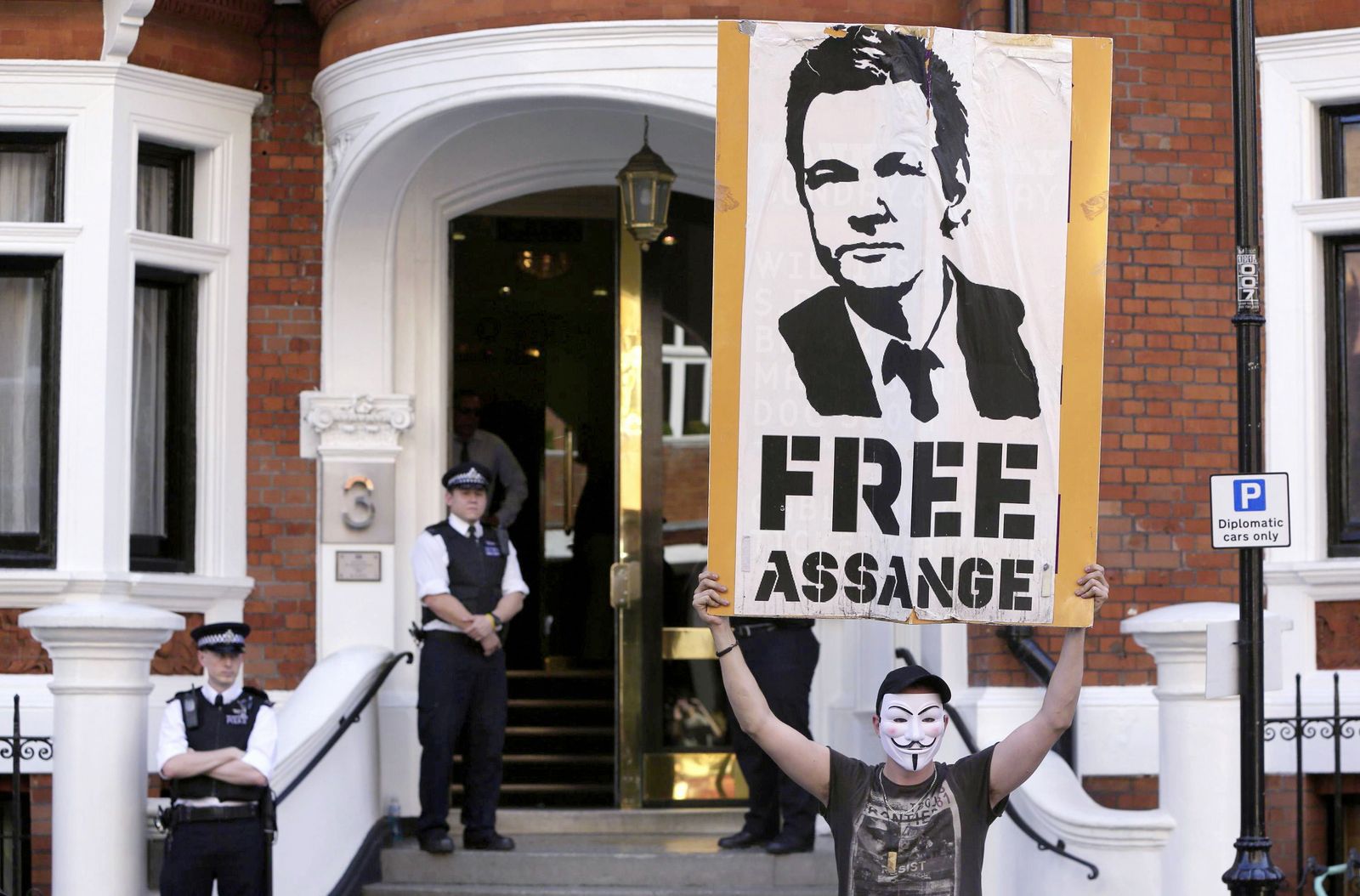 A protestor holds a poster of Wikileaks founder Julian Assange outside Ecuador's embassy in London.