Luxury apartments, star architects and a waterfront promenade; a five-star hotel, a university, plenty of residential and office space and excellent public transportation. Hamburg's HafenCity is one of the largest city center development projects in the world today, and it is an incredible undertaking. The jewel in the crown will be a brand new, and very expensive, opera house designed by Herzog & de Meuron -- it will be a sight to rival Sydney's landmark concert hall.

By the time HafenCity (Harbor City) is finished in 2025, Hamburg's newest district will stretch 1.5 kilometers (0.9 miles) between the city center and the Elbe River, covering the site of the former harbor. The quarter will double the population of Hamburg's city center. No satellite town this: HafenCity sits less than a kilometer from the Hamburg town hall and its success is essential to Germany's second largest city.

But how to ensure that success? How can one make certain that this very important piece of real estate actually becomes a living, breathing part of the city -- a place where people want to both work and spend their leisure time? Indeed, how can one guarantee that a brand new neighborhood actually feels neighborly? 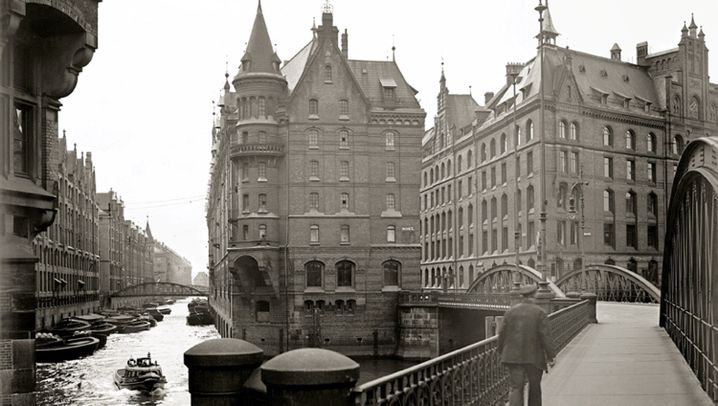 Strolling through HafenCity on an overcast, late-summer evening is enough to make anyone feel the weight of such questions. It remains difficult to get here with several roads blocked by construction sites and taxis a rarity. During the day, a never-ending stream of trucks cause noisy, dusty traffic jams. While some in Hamburg are optimistic, calling the development "Hamburg's most beautiful construction site," others are less kind, referring to it as an "architectural zoo." For the moment, both are accurate. Many of the new structures are certainly aesthetically pleasing, but HafenCity does not feel like a city center. In fact, apart from a couple of lit windows and one or two pedestrians out with their dogs, it feels like nothing so much as an oversized ghost town.

'A Space that Will Not Attract People'

Some fear it could remain that way and that high property prices could seal the new quarter's fate as a "rich man's ghetto" full of wealthy pensioners. Such concerns have been fueled by forecasts estimating that up to 10 percent of office space in Hamburg's city center will stand empty by the end of 2010.

Were HafenCity to fail, it certainly wouldn't be the first. As American William H. Whyte, wrote in his 1980 book "The Social Life of Public Spaces": "It is difficult to design a space that will not attract people. What is remarkable is how often this has been accomplished."

Earlier examples include Chandigarh, the town designed by legendary architect Le Corbusier in India and the Pruitt-Igoe housing project in St. Louis, demolished in 1972 after failing spectacularly to provide a new revolutionary form of low-cost, high density housing. Closer by is London's Docklands area, which was redeveloped during the 1980s and '90s and has been roundly criticized for a focus on making money from luxury developments rather than aiding the low-income families that already lived there. Hamburg itself has its very own example of a development-gone-astray. City Nord, a commercial development built in the 1960s to accommodate companies who couldn't find space in the city center received the following verdict in SPIEGEL: "The architecture was award winning -- but the lifestyle? There's more going on at local cemeteries."

Happily for the city of Hamburg, the planners of HafenCity are well aware of the potential pitfalls. And to avoid them, they are relying on the principles of a field called environmental psychology.

Good for Your Mental Health

A multi-faceted discipline, environmental psychology enjoyed a lot of attention in the 1970s and '80s and launched its own publication, the Journal of Environmental Psychology, in 1980. With its broad definition of environment -- used to include social, physical, architectural and other elements -- it has since been used to get shoppers to buy more in malls, to encourage environmentally friendly behavior and even to determine whether indoor plants are good for your mental health.

HafenCity is one of the most significant developments utilizing elements of environmental psychology today. Indeed, Jürgen Bruns-Berentelg, the executive chairman of HafenCity Hamburg GmbH, which is overseeing the development, seems downright enthusiastic about what he describes as the psychological development of "a post-modern community."

"At the end of the day, physical structures are also social and cultural," Bruns-Berentelg notes.

The key, says Bruns-Berentelg, is avoiding the kind of compartmentalization -- with areas for offices clearly separated from residential zones -- which characterizes many German cities rebuilt soon after World War II. In HafenCity, cultural and social institutions -- such as art galleries, museums and the university -- will end up alongside commercial structures and residential buildings. Penthouses for the wealthy are to be neighbors with apartments for those with lower incomes. The first school has already opened as has a retirement home.

In addition to the so-called "mixed use" concept, an aggressive communication strategy is aimed at attracting the right mixture of people to the development to avoid the rich retiree scenario critics have warned of. Bruns-Berentelg, who also helped develop Berlin's Potsdamer Platz following German reunification, envisions cultural and social institutions side by side with apartment buildings and shops as a way to create a sense of community.

But What About the Birds?

Most important, though, has been the effort to encourage dialogue between those who have already moved in to HafenCity and the developers themselves. Eventually, the quarter is expected to have around 5,800 residential units with 12,000 residents and between 45,000 and 50,000 workers commuting to the quarter during working hours. For the moment, however, there are just 1,550 residents and 6,000 workers.

To facilitate communication with these forerunners, HafenCity has employed sociologist Marcus Menzl, who acts as a go-between for the residents and HafenCity. "You can't have a totally structured place and then just expect people to fit in," Menzl says. "But nor will it work if everything is totally open to interpretation." The goal, he says, is to find a balance, "between structures and freedoms and opportunities."

Menzl points out an example to illustrate how the right balance can be struck. In 2008, he says, there were 600 inhabitants including 40 children, a number that was surprisingly high given the lack of a kindergarten and playground at that early stage. Indeed, during his regular interviews with the new HafenCity dwellers, Menzl discovered that a playground was high on parents' wish list. So HafenCity decided to go ahead and build a temporary one that could be moved once construction had advanced.

The parents also suggested an indoor recreation area for use during bad weather. "We said we would do this too as long as they took over responsibility for it," Menzl says. HafenCity financed half of it and the parents financed the other half.

Lessons from a Mining Village

This kind of fine-tuning on the fly, says Bruns-Berentelg, will be used as additional issues and needs crop up in the future -- exactly the kind of drug that environmental psychologists might prescribe.

For six years Gerda Speller, an expert in the field from Germany who now lectures at the University of Surrey in Britain, studied the relocation of the hundred-year-old mining village Arkwright Town in Derbyshire, Britain. All the villagers were moved into new housing a short distance away in the mid 1990s due to methane gas emissions from a nearby coal mine.

From her research Speller concluded that a number of conditions must be met for people to form an attachment to a new neighborhood. First and foremost, residents need to have a say in the shaping of their surroundings. "Often," Speller continues, "you will find with developments like this that they are completely finished before people move in. So they lack the chance to make their new environment their own."

Obviously this is not the case with HafenCity where, despite the existence of a "Master Plan," the residents and other stakeholders have an input into the ongoing project. As Bruns-Berentelg points out: "Research has been going on for five years now. It is a learning process with no blueprint."

Additionally, Speller found that security, autonomy and a sense of "place congruence" were vital as were optimal levels of internal and external stimulation. "If those things are in place, then it should work," she says.

Sometimes it can be the little things that count. When the inhabitants of Arkwright Town moved into their new lodgings, everything was more or less finished. But there was no greenery, and therefore, no birds. "People were absolutely distressed," Speller says. "It took about six months for shrubs and trees to provide enough cover for the birds to frequent the new town. The planners of the new town had tried to think of everything and it was fascinating that this lack of external stimulation turned out to be so very important."

Being right by the waterside, this should not be a problem for HafenCity. Furthermore, initial research has shown that those who have moved in already identify strongly with their new surroundings, says Menzl. "That sort of emotional connection usually only comes with time," he says. "But they seem to have identified with HafenCity very quickly and they want to support the philosophy. You cannot build a neighborly feeling," he reasons. "But I think that architecture can help certain processes and hinder others."

That seems exactly what Bruns-Berentelg set out to do. Furthermore, HafenCity has also ensured that residential units are available for a wide range of budgets, an important part of attracting the kind of mixed population the quarter strives for.

"We are doing something very ambitious here," he says. "Yes, we are building buildings. But we are also producing social and cultural environments for the next century. After all, a city is not only a commercial product, but also a public good."