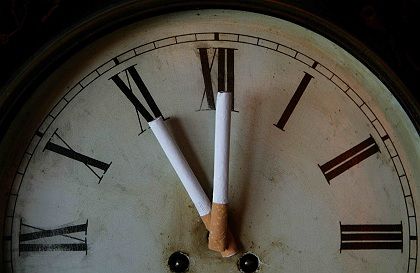 The clock is ticking to the smoking ban in most of Germany starting Jan. 1.

Smokers have long found Germany a paradise, with bars, restaurants and hotels across most of the country allowing them to puff away to their hearts' content. But no more: From Jan. 1 eight of the country's 16 states will join the three others who have already introduced smoking bans in many public places. The other states will join in later in the year.

Of course this should be the perfect time to make a New Year's resolution to kick the filthy habit. But die-hard smokers in most states will be allowed to continue indulging in the nicotine fix in smaller closed-off smoking rooms. For the non-smoking public, however, it will now be possible to enjoy a meal or drink without sitting in the equivalent of an ashtray.

The eight states, Berlin, Bavaria, Brandenburg, Bremen, Hamburg, Mecklenburg Western Pomerania, Saxony-Anhalt and Schleswig-Holstein will join Lower Saxony, Baden-Württemburg and Hessen in the crackdown on smokers' freedoms. Saxony, Saarland and North Rhine-Westphalia will impose their smoking restrictions within the next two months, while Thuringia is introducing its ban in July 2008.

Typically for Germany, many states will have their own particular variations. For example, Bavaria is introducing the strictest curbs, enforcing a ban in beer tents as well as pubs and restaurants -- resulting in a smoke-free Oktoberfest in 2008. And many states won't enforce fines for breaking the rules until a few months have passed.

In Berlin, rebellious smokers won't have to fear any repercussions until June, when they will be slammed with fines of up to €100, while the pub owners will face far heftier fines of up €1,000.

The German restaurant industry has complained that the measures will deter people from going out to drink or eat. The German Hotel and Restaurant Association (DEHOGA) says that many businesses in the states that have already introduced the ban have suffered sharp falls in profits with, it claims, 15 percent seeing a 50 percent drop in turnover.

And in particular the so-called "corner pubs" -- tiny bars with a regular local clientele -- are expected to be particularly hard hit as they are not in a position to have a separate smokers section. In the states of Saarland and Saxony, however, these one-room pubs can chose whether to impose the ban, provided the owners have no employees.

Health campaign groups have in general welcomed the new measures, which should protect non-smokers and help smokers to give up. The Heidelberg-based German Cancer Research Center says, however, that it is disappointed that most states are allowing smokers' rooms. This means that bar workers will have little choice but to continue to breathe the noxious air. The center estimates that 3,300 people die each year in Germany from the effects of passive smoking.