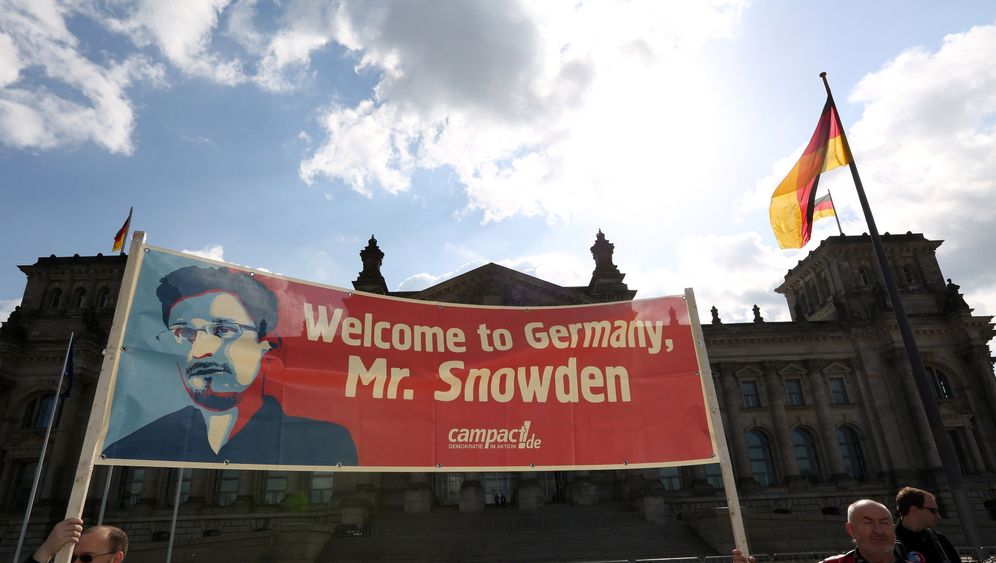 A special investigative committee in Germany's federal parliament, the Bundestag, is currently probing allegations first published in SPIEGEL that the United States' National Security Agency intelligence apparatus spied on Chancellor Angela Merkel's cell phone and also on the communications data of millions of German citizens. The allegations have become the source of significant tensions between Germany and the United States.

One of the central questions facing the committee is whether and how it will question former NSA employee and whistleblower Edward Snowden, whose archive has been the source of numerous investigative reports about the intelligence agency's activities.

The German government under Chancellor Angela Merkel is adamantly opposed to having Snowden testify in Germany. In a classified position paper provided to the committee -- that was leaked to the Süddeutsche Zeitung newspaper and other media in late April -- the government argued that if Snowden testified in Germany, it would endanger the "welfare of the state." It added that his questioning in Germany would "run contrary to important political interests of the Federal Republic," and that if the former intelligence worker were allowed to travel to Germany, the US secret services "would at least temporarily" limit cooperation with their German counterparts. Indeed, according to SPIEGEL reporting, Merkel pledged to US President Barack Obama the NSA whistleblower would not be brought to Germany.

Political views in Germany are mixed over whether Snowden should be brought to Berlin for questioning in the affair, but members of the investigative committee are already exploring alternative ways of talking to the man who brought the scandal to light.

Patrick Sensburg, 42, a member of Chancellor Angela Merkel's Christian Democratic Union (CDU) party, is the chairman of the NSA investigative committee. In an interview with SPIEGEL, he discussed the parliament's plans for questioning Snowden.

SPIEGEL: Are you already in contact with your witness, former NSA employee Edward Snowden?

Sensburg: Not directly. The NSA investigative committee in parliament has unanimously agreed to question him, possibly as early as July 3. We will now discuss with his German lawyer where and under which circumstances this can take place.

SPIEGEL: Snowden -- who can count on having political asylum in Moscow until the end of July -- has said he wants to come to Germany and make himself available to members of parliament. What's wrong with that?

Sensburg: This isn't just a question of what he wants, but also about what is feasible. We're going to discuss the different possible scenarios. Why does Snowden have reservations about being questioned in Moscow either directly or via video conference? How can we dispel his concerns? Are his concerns justified or do they simply represent what he sees as the best possible alternative in another proceeding over his future residence status? For us, this is not about fulfilling a wish. If we come to the conclusion in our discussions with his attorney Wolfgang Kaleck that there is a feasible plan of action, then we will come out in favor of it, even if it isn't Snowden's preferred path.

SPIEGEL: There is apprehension that Snowden wouldn't really be free in his answers if he were questioned in Russia.

Sensburg: I don't see it that way. His attorney has made it clear to the investigative committee that Snowden hasn't answered certain questions so far because they were not posed by the European Parliament. And he now wants to answer more concrete questions from the French Senate. And he wants to do this from Moscow, so there is no reason not to question him there.

SPIEGEL: Where could the Snowden questioning take place?

Sensburg: If Snowden wants to testify without being under the scrutiny of Russian leader Vladimir Putin and his FSB secret service, he could undergo questioning in the Moscow embassy of a third country. Switzerland, for example, has excellent security technologies at its disposal. It would surely be possible to establish a bug-proof video conference call to Germany. It would also be possible to arrange a meeting between members of the NSA investigative committee and Snowden in the Swiss Embassy, provided the Swiss agree. In any case, we are also reliant on the cooperation of the Russian government.

SPIEGEL: Why not request that he visit Germany's diplomatic mission?

Sensburg: I consider that to be problematic. What would happen if he were to say he didn't feel safe there either? What if he said he wanted to go to Germany and wouldn't testify until he arrived there. What then? The issue of political asylum within the context of an embassy is a tricky legal issue. We also have to look closely at whether we can guarantee Snowden's safety in our Moscow mission. Could he be kidnapped there by the Americans? What would happen if he were to leave the building and get pulled into a bus by American agents? That would be highly embarrassing.

SPIEGEL: A kidnapping by the Americans, right in the center of Moscow? Doesn't that sound a little absurd?

Sensburg: I don't want to rule out any possibility in this case. That's why I advocate that the questioning take place inside the diplomatic mission of a third country. It could also be a South American embassy.

SPIEGEL: It's possible Snowden would then get trapped in a situation similar to that of WikiLeaks founder Julian Assange, who has been holed up in the Ecuadorean Embassy in London for almost two years now. Wouldn't it be a more humane act to bring Snowden to Germany?

Sensburg: A questioning in Germany remains an option. But I doubt very much that he would accept that because there is an extradition request from the United States based on the serious accusation that he committed acts of treason. There is no basis whatsoever for granting him political asylum in Germany. In its expert opinion, the German federal government made it clear that Snowden would have to expect extradition proceedings the moment he stepped off a plane here. But perhaps that wouldn't be a bad solution, after all.

Sensburg: I can't imagine that a life under the wings of the FSB would be comfortable. I also consider the alternative promoted by the German opposition -- of placing him in a German witness protection program and thus putting him into hiding for years -- to be very unappealing. If he were to turn himself in for extradition proceedings in Germany, he might be able to negotiate the conditions of this return to the US from here. I would prefer a prison sentence of four or five years in the United States to a life on the run.

SPIEGEL: Other members of your party, the conservative Christian Democratic Union (CDU), are critical of the fact that the committee is even considering questioning Snowden as a witness. They argue there is little he can do as a former NSA technician to clarify (the NSA spying scandal).

Sensburg: Witness testimony is fundamentally the weakest evidence but it serves, among other things, to substantiate evidence. That's why we submitted a motion for Snowden to provide the committee with access to his data or for those who have access to the NSA documents to hand them over to the committee. Absurdly, representatives of the opposition voted against this motion. In my view, written documents are preferable. I nevertheless think it would be useful to question Snowden.