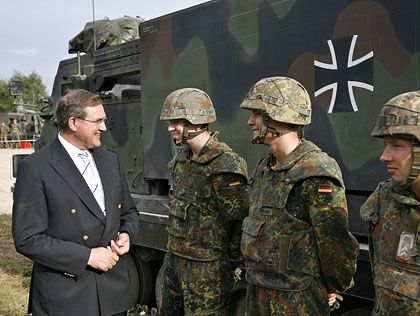 Germany's Iron Cross: A symbol of peace or of war?

Back when it was introduced in the 1800s, the Iron Cross was meant to reward soldiers for heroism on the field of battle. It was a medal not much different from the Congressional Medal of Honor awarded to US soldiers. But in World War II, the medal came to symbolize the Nazis and their demonic ambitions -- and after the war, it disappeared.

Now, though, a representative of German soldiers wants to bring back the Iron Cross. At a meeting of an association of German reservists in Berlin on Tuesday, the group's president, Ernst-Reinhard Beck -- also a member of Germany's parliament, the Bundestag -- suggested that the medal be reintroduced for those who show "extraordinary courage or bravery."

Beck granted that the symbol is historically problematic, saying that "under this symbol, a lot of fear and horror was spread" throughout Europe. But, he pointed out, the Iron Cross symbol now appears on all aircraft, ships and ground vehicles belonging to the German military. From the Balkans to Afghanistan, Beck said, it has become a "symbol of help and solidarity."

German Defense Minister Franz Josef Jung responded to the plea in a speech at the same event, saying that it was indeed time to reward courageous soldiers. At present, Germany hands out medals to soldiers who serve in foreign missions for four months or more. There is also an "honor cross" for soldiers who are particularly loyal. Courage on the battlefield, however, goes unrewarded in the Bundeswehr.

Still, the idea of bringing back the Iron Cross is one that makes many Germans nervous. It was introduced in 1813 during the rule of King Friedrich Wilhelm III. But Adolf Hitler received an Iron Cross during his World War I service and, in 1939, added a swastika to the center of the traditional design. The medal became a symbol of Nazi Germany's attempt to conquer Europe.

There has long been a petition in the Berlin parliament to bring back the Iron Cross. But enthusiasm has been decidedly limited. A military expert for the business friendly FDP said this week that Jung "should concern himself more with the equipment soldiers really need for foreign missions" than with "metal on their breasts." SPD parliamentarian Rainer Arnold was more to the point. The Iron Cross, he said, "is too burdened by history."