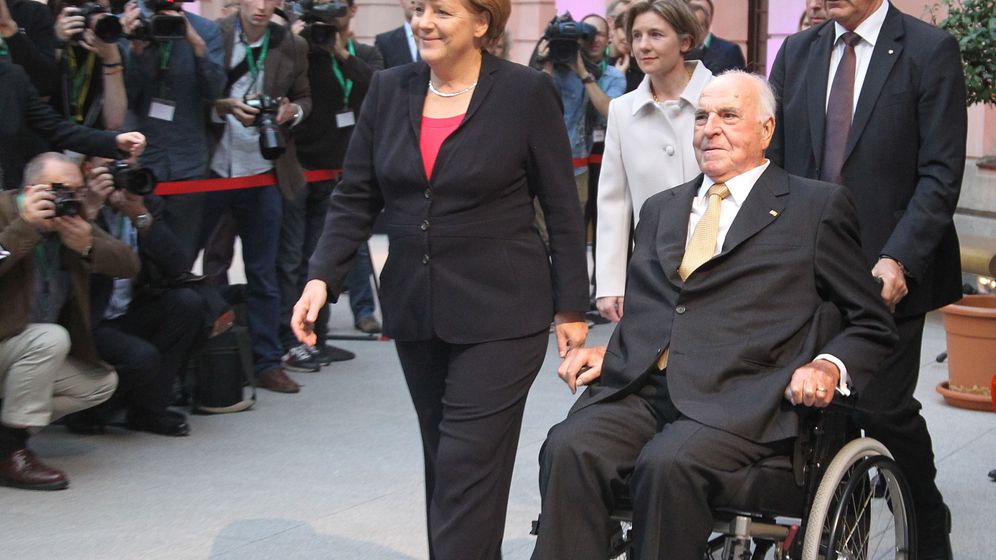 He is still an imposing figure, dominating the stage though confined to a wheelchair. And yet, the aged former Chancellor Helmut Kohl, once larger than life, seems fragile. In the spotlight on Thursday evening for celebrations to mark the 30th anniversary of his first election to the Chancellery, Kohl sits almost motionless, his voice brittle, sometimes difficult to understand.

"I am 82 years old and I don't know what our dear Lord has in store for me," Kohl says. "I only know that I want to continue…" His speech becomes indistinct as he talks of a "great goal" and of a "peaceful Europe." It is a moving moment, but also distressing at the same time -- to see the father of German reunification in such a state.

Kohl's appearance on Thursday night at the German Historical Museum was the high point of a week celebrating the country's longest-serving chancellor and a political career that can be rivalled only by that of Konrad Adenauer in its importance for postwar Germany. Kohl was first elected to the country's top political post on Oct. 1, 1982 and he has been omnipresent this week, having visited the conservative caucus in German parliament on Tuesday for the first time in a decade.

It is an exhausting schedule for Kohl, whose health is visibly deteriorating. His mind is clear, but his body has weakened considerably, the result of a serious fall he took in 2008 following a knee operation. On Tuesday, he spoke to parliamentarians for some 10 minutes behind closed doors, saying that he was happy to once again be "at home." But on Thursday evening, in an event that was broadcast live on television, Kohl's remarks were limited. He thanked those present for coming and thanked those who had helped make his career possible. "It was a fantastic time," he said. The some 700 people in the audience rose out of their chairs in applause.

A Week of Rapprochement

Yet the event in central Berlin on Thursday night was important for more reasons than for the anniversary it celebrated. Kohl and the party he once led, the Christian Democrats, have been at odds for more than a decade following the campaign donation scandal that broke in 1999, a year after Kohl was voted out of office in favor of Gerhard Schröder. The former chancellor refused to divulge the source of a campaign donation of between 1.5 million and 2 million deutsche marks despite being required to do so by CDU party regulations. To this day, he has remained silent on the issue. The primary beneficiary of Kohl's fall was current Chancellor Angela Merkel who, in a public appeal published in the German press in December 1999, urged the party to leave its powerful leader behind.

This week has marked something of a rapprochement between Merkel and Kohl, a process that began with Merkel's visit to Kohl's home in 2009. And it was Merkel who held the keynote address on Thursday evening, referring to the event as a "bow to Kohl's lifetime achievement." She praised his role in securing Germany's reunification, lauded his "passionate commitment" to Europe and extolled his role in bringing about the European currency union. Europeans, she said, have Kohl to thank for "a significant portion of their happiness."

The CDU, in short, have gotten back their living legend. And Kohl was joined -- at least virtually -- by several of his contemporaries by way of brief messages projected onto a screen. Former US President George H. W. Bush, former UK Prime Minister John Major and current Euro Group head Jean-Claude Juncker all praised Kohl from afar. "Without Helmut Kohl, the euro wouldn't exist," said Juncker. Former European Commission President Romano Prodi came to Berlin in person as a stand-in for one of his predecessors, Jacques Delors, who is ill. Prodi said that Kohl made dreams come true, referring to Germany's October 1990 reunification and the "irreversibility of the European project."

Still, the relationship between Merkel and Kohl seems to remain lukewarm at best. Merkel was once referred to as "Kohl's Girl," and he plucked her from relative obscurity to join his cabinet following the fall of the Berlin Wall. Her calculated 1999 call to leave Kohl behind following the campaign donation affair propelled her past several more senior party figures and, ultimately, to the Chancellery. It is difficult to imagine that Kohl has completely forgiven her and despite her warm words on Thursday evening, the distance between them was hard to miss.

A Substantial Amount of Bitterness

Now, though, history has thrown Merkel into the position of devoting her career to keeping together the Europe that Kohl helped make reality. Last year, it was reported that Kohl doubted her ability to do so. "She is destroying my Europe," he allegedly said. What he didn't say, of course, was that she is also trying to correct all those mistakes that were made when the currency union was created. Some of those were Kohl's mistakes.

Merkel is often accused of not having a vision for Europe and that she has not adequately explained exactly why it is worth hundreds of billions in aid funds to keep it from disintegrating. As such, Kohl's simple message -- that peace can only be guaranteed by keeping Europe unified -- is a welcome one. "Europe can never again be allowed to descend into warfare," Kohl said. Merkel's message: "Europe is our fate and our future."

Still, despite the celebratory atmosphere, the evening was not free of uneasiness, and not just because of the condition of Kohl's health. The former chancellor's legacy, after all, is not entirely untainted. He has still not resolved remaining doubts about the campaign finance affair, a situation that resulted in years of strife with his own party. In 2000, he stepped down from his position as honorary chair of the Christian Democrats. He also was famous for dividing people into two distinct categories, friends and enemies, a fact that left behind a substantial amount of bitterness.

Much of that was forgotten on Thursday evening. And his legacy in Germany at large and in the history books promises to be almost exclusively positive. It is, in fact, a legacy that began to take form this week. Following his rare public appearances, Kohl will also be more visible from now on. Merkel unveiled a new stamp bearing his image during the celebration. 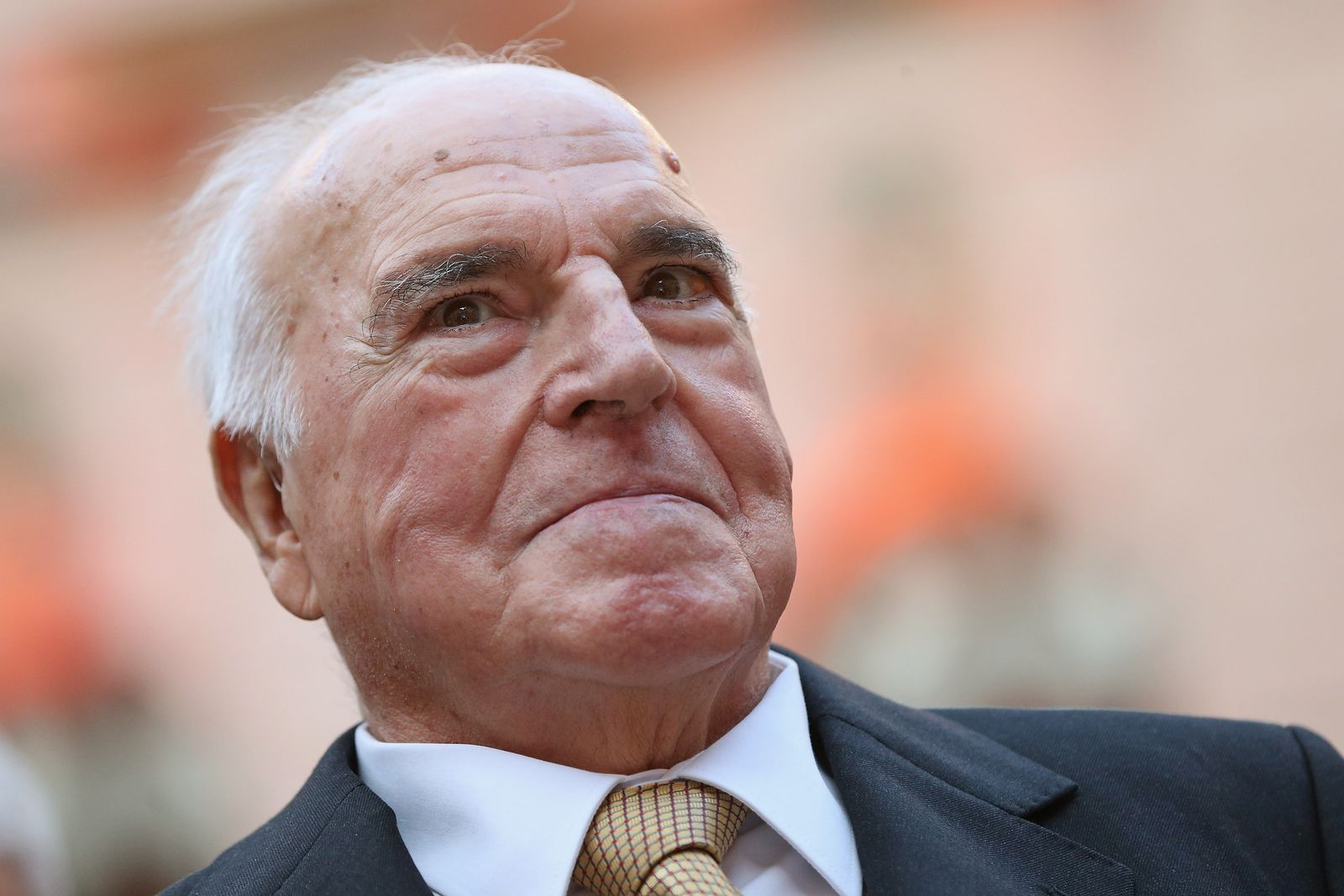 Kohl has been in a wheelchair since a bad fall he took in 2008 following knee surgery. He has a hard time speaking, but said on Thursday night that "I am 82 years old and I don't know what our dear Lord has in store for me. I only know that I want to continue."