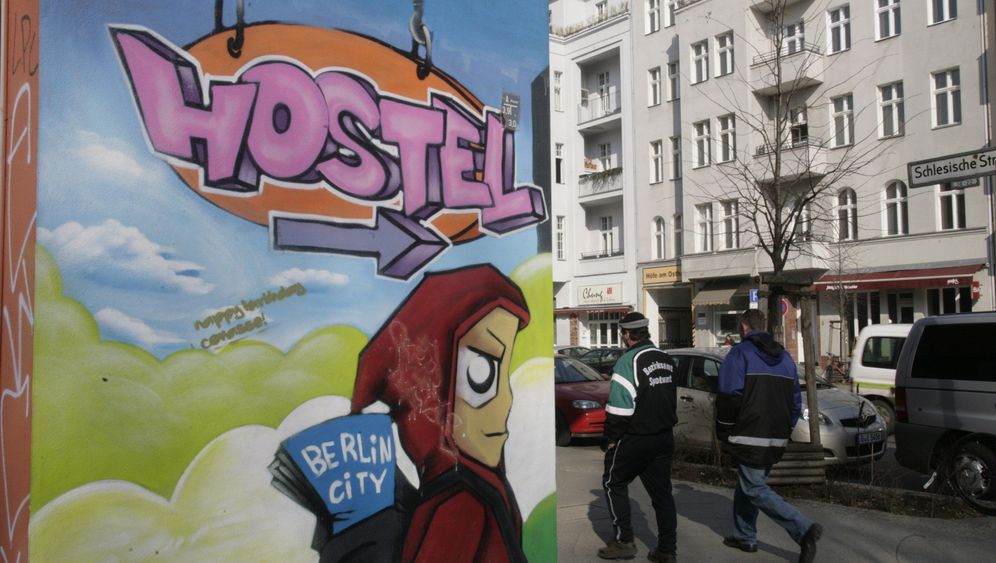 Photo Gallery: Invasion of the Tourists

The sun shines down brightly on the café tables and chairs spread across Spreewaldplatz square in Berlin's Kreuzberg neighborhood, but no one is making use of them. It's just before 11 a.m. and the German capital's hordes of tourists -- the backpackers from Spain, Italy, Norway and Sweden -- are still sleeping.

As they slumber peacefully on, they are probably unaware of the ruckus they have caused. Recently, locals in Kreuzberg have been heatedly discussing the visitors who flock to the district, which is famous for its alternative edge and multicultural vibe. The number of overnight stays there has, according to the local Green Party, almost tripled in recent years, to 2.37 million in 2009. More and more cheap hostels are springing up -- in the past five years, their number has risen from 30 to 50. Increasingly, apartments in the area are not being rented out for Berliners to live in, but as holiday flats for tourists.

The Kreuzberg residents, like those who live in other fashionable areas of Berlin such as Prenzlauer Berg, Friedrichshain and Mitte, are plagued with a problem: Parts of these neighborhoods have become increasingly desirable in recent years, with rapid gentrification occurring as a result. And now the influx of tourists is driving rents up even higher.

Ironically, in a district where tolerance at all costs is the civic watchword, residents are now getting ready to revolt. The Green Party recently invited people in the "Wrangelkiez" area of Kreuzberg, in reality a low-income neighborhood with high unemployment and a large number of immigrants, to take part in a discussion. The title of the event: "Help, the tourists are coming!" The response was immense.

The party scene in the part of the Wrangelkiez near the Schlesisches Tor metro station has exploded in the last few years. In the evenings it's almost impossible to navigate along the packed streets. The "Lonely Planet" travel guide to Germany advises young travellers to "hit the bars of Kreuzberg for a night of tabloid-worthy drinking and debauchery." The area around Schlesische Strasse, with its "alternative bars" is particularly recommended.

Bülent E., who runs the 36 Rooms Hostel, talks up the unforgettable nightlife. Up to 150 travelers can be accommodated here, with a bed in a dormitory room from just €10 ($14) a night. On this particular morning, a couple of young women are hanging around on the sofas near reception, their fingers wearily working their iPhones. A nearby fridge is stocked full of beer.

Bülent E. is right in the middle of the tourism battle. "We are being attacked by the authorities," he says. There are constant reports of disturbances. The authorities are putting people's livelihoods at risk, he claims. He understands that the noise is sometimes unbearable for the residents. But that just means the rules and regulations governing hostels must be clearer. "It is chaos," he says.

In the surrounding streets, there are rows of snack shops and tapas bars, with frequent new openings. Amidst all the tourists, residents feel a little like they are in the zoo, says one blonde woman in sunglasses. But she doesn't have anything against the visitors in principle, she says.

Kreuzberg's Tolerance Could be Lost

Kreuzberg is divided. Berlin is a poor city -- lacking in industry, but full of tourists. According to Berlin's Tagesspiegel newspaper, more than 9 million people visited the city in 2010, spending 20.8 million nights in the German capital's hotels. A total of €9 billion in tax was deposited into the city-state's coffers as a result. It's no surprise that Harald Wolf, the economics minister in the city-state's administration, has warned against a new hostility toward tourists.

One resident of the Wrangelkiez, a social worker who has lived there for 15 years, says: "If you'll allow me to exaggerate a little: There used to be Turks here, now there are Spaniards." A mixture of people is all well and good, she says. "But the completely ordinary people and completely ordinary shops are being crowded out by the restaurants that make their living from the tourists."

Kreuzbergers are considered to be laid back, she says, explaining that residents who call the police to complain about noise are often told they should move to another part of town. That is a disturbing answer, she says, "for those of us who have lived a middle-class life here for years." She hopes that tourists will at some point realise "that people here have to go to work in the morning and therefore need to sleep."

There is also a conflict between the 20-something and the 30-something generations in the neighborhood -- between younger people who want to party all the time, and those who are older, have kids and have a greater need for peace and quiet. In the local magazine Kreuzberger Chronik, the district mayor Franz Schulz, a member of the Green Party, says that the fact families with children are once again moving into Kreuzberg is a welcome development. But the newcomers "came to our district with very different interests and goals to those who came here 30 years ago," he says, referring to the time when Kreuzberg was a center for left-wing activists and squatters. It could happen that something gets lost in the process, namely "tolerance," the politician adds.

While the Wrangelkiez neighborhood wrestles with how to deal with the EasyJet set, another option for tourists has opened up in the Bergmannkiez, the neighborhood around Kreuzberg's popular Bergmannstrasse. A sign on a recently renovated buidling advertises "Traumberg" ("Dream-berg") holiday flats and guest rooms.

In the area around the Chamissoplatz square, the number of holiday apartments has risen sharply. A solution to the problem is not simple, says travel journalist Hans W. Korfmann, who publishes the Kreuzberger Chronik magazine. There is a real threat, he says, that the things Berlin -- and in particular the area around Bergmannstrasse -- stands for will be lost. "There was always a mixed bag here: Intellectuals, politicians and welfare recipients lived next to each other, and would sit together in the courtyards of the buildings."

One journalist, who lives with his family in a listed building on the neighborhood's Hagelberger Strasse, has personal experience of these developments. The apartment below him is rented out to tourists, usually groups of young people, often from France or Italy. "The noise is unbearable, especially in the summer, loud techno music until early in the morning. The kids cannot sleep," he says. And he has heard of many similar cases. A friend bought a maisonette duplex in a nearby side street, he says. When they moved in, they realised that the apartment underneath them was also being rented out to tourists.

Just how difficult it is to handle the situation can be seen by a statement made last year by Franz Schulz, the district mayor, relating to the holiday apartments in Hagelberger Strasse. The local branch of the center-left Social Democrats (SPD) wanted to know how the authorities defined a holiday apartment. "The use of many apartments as holiday apartments is contrary to the goal of urban revitalization of central city areas and promotes the displacement of residents," they claimed. In his response, the mayor wrote that the legal situation was complicated, because use by tourists could be regarded as a hybrid form between a hotel and an apartment, meaning there was only "a very limited opportunity" to take legal action against it.

Nonetheless, in local politics there is an ongoing fevered debate as to whether the tourist influx is compatible with the rights of local residents. A tax on every overnight stay is even being considered.

Some Kreuzbergers are remaining relaxed about the situation, however. The district may be popular at the moment, says one pensioner. "But the tourists will move on at some point and look for new places to stay."